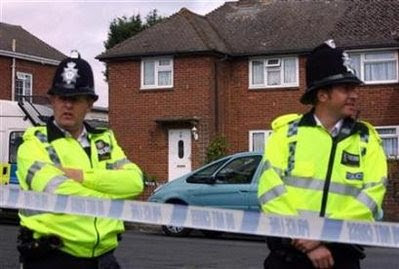 London police following a raid related to the thwarted bomb plot to blow up aircraft in mid-flight, August 10, 2006. The trial of eight Britons accused of plotting to blow up transatlantic airliners bound for North America began on Wednesday with jury selection.
(Stephen Hird/Reuters)

Barack Obama, Hillary Clinton and John McCain brought their presidential campaigns to the Petraeus-Crocker hearings on Iraq this week. An Iraq-based reporter appearing on one of the cable networks in the evening said the hearings struck him as oddly decoupled from the daily reality of war for the Iraqi people and U.S. troops there. Yup, never hurts to pinch yourself hard on entering presidential campaign space right now.

The three candidates addressed Gen. David Petraeus in tones of high gravitas equal to the thin altitude of the American presidency. Sen. Obama colloquied with Gen. Petraeus about the status of al Qaeda in Iraq – asking whether the terrorist organization could "reconstitute itself" and said that he was looking for "an endpoint."

Here's another hypothetical: Would this conversation be different today if in August 2006 seven airliners had taken off from Terminal 3 at Heathrow Airport, bound for the U.S. and Canada and each carrying about 250 passengers, and then blew up over the Atlantic Ocean?

It is a hypothetical because, instead of the explosions, British prosecutors this week presented their case against eight Muslim men arrested in August 2006 and charged with conspiring to board and blow up those planes.

The details emerging from that case are quite remarkable and will be summarized shortly. Pause to reflect on the ebb and flow of public debate that has occurred over how free societies should order themselves after two airliners full of passengers knocked down the World Trade Center Towers on Sept. 11 in 2001.

The view that 9/11 "changed everything" did not hold up under the weight of our politics. Divisions re-emerged between Democrats and Republicans, in office and on the streets. These fights reignited over the Patriot Act, Guantanamo and the warrantless wiretap bill (or "FISA" revision). These arguers stopped to stare momentarily at their televisions when Islamic terrorists committed mass murder in the 2004 Madrid train bombing and the 2005 London subway bombing.

One sometimes gets the feeling that our policy debates over national security and the journalism that travels with them float, as it were, at 30,000 feet above the reality of the threat on the ground. A novelist or filmmaker, alert to the personal demons that drive modern terror, would with fiction better clarify what is at stake. Start with the details of the eight defendants now on trial in England.

The names of the accused plotters, all men in their 20s, are Abdullah Ahmed Ali, Assad Sarwar, Tanvir Hussain, Mohammed Gulzar, Ibrahim Savant, Arafat Khan, Waheed Zaman and Umar Islam. They lived around London, in Walthamstow, Leyton, Plaistow and Barking. Most are Pakistanis. 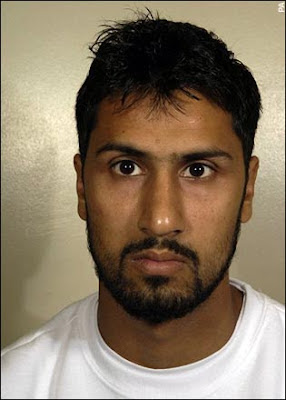 Abdullah Ahmed Ali was caught on a wiretap telling his wife that he wished to bring his baby son along on the suicide mission. She resists. His suicide video, intended to become public after the planes blew up and shown at trial, promises "floods of martyr operations against you" and "your people's body parts decorating the streets."

Waheed Zaman studied biomedical science at London Metropolitan University. In his video Zaman says, "I have been educated to a high standard. I could have lived a life of ease but instead chose to fight for the sake of Allah's Deen [religion]."

Umar Islam mocks complacent Brits: "Most of you too busy, you know, watching Home and Away and EastEnders, complaining about the World Cup, drinking your alcohol." This would be fascinating as one nut's reason for murder. It is instead the basis for an ideology to justify blowing up thousands.

The prosecution said a computer memory stick on one of the men at his arrest listed the targeted flights. They were: United Airlines Flight 931 to San Francisco; UA959 to Chicago; UA925 to Washington; Air Canada 849 to Toronto; AC865 to Montreal; American Airlines 131 to New York and AA91 to Chicago. The first flight would depart at 2:15 p.m., the last at 4:50 p.m., allowing all to be aloft and out of U.S. or British airspace when they fell.

The private intelligence-analysis agency, Stratfor, concludes from the trial that "al Qaeda remains fixated on aircraft as targets and, in spite of changes in security procedures since 9/11, aircraft remain vulnerable to attack."

The men planned to take the bomb pieces onboard for assembly: empty plastic bottles, a sugary drink powder, hydrogen peroxide and other materials to be detonated with the flash on disposable cameras.

The arrests of the men, who say they are innocent, were the result of broad and prolonged surveillance. For months, the suspects were bugged, photographed and wiretapped.

Here in the U.S., our politics has spent much of the year unable to vote into law the wiretap bill, which is bogged down, incredibly, over giving retrospective legal immunity to telecom companies that helped the government monitor calls originating overseas. Even granting there are Fourth Amendment issues in play here, how is it that Speaker Nancy Pelosi, Hillary Clinton and Barack Obama cannot at least say that class-action lawsuits against these companies are simply wrong right now?

Philip Bobbitt, author of the just released and thought-provoking book, "Terror and Consent," has written that court warrants are "a useful standard for surveillance designed to prove guilt, not to learn the identity of people who may be planning atrocities." Planning atrocities is precisely the point.

"Atrocity" is a cruel and ugly word, but it has come to define the common parameters of the world we inhabit. It is entertaining to watch the candidates trying to convince the American people of their ability to be presidential. It would be more than nice to know, before one of them turns into a real president this November, what they will do – or more importantly, will never do – to stop what those eight jihadists sitting in the high-security Woolwich Crown Court in London planned for seven America-bound airliners over the Atlantic Ocean.

Daniel Henninger is deputy editor of The Wall Street Journal's editorial page.
Posted by jtf at 10:58 AM