Patriots' leader is a three-time Super Bowl champion, but he seems more a quarterback for his time than for all time. In other words, he's no Unitas. 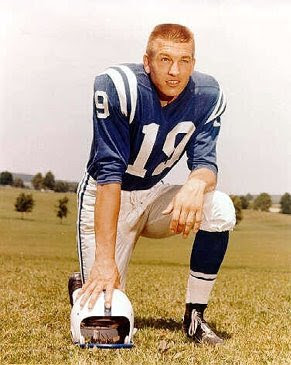 The first thing you notice about Tom Brady is, well, nothing.

He doesn't have a nick on his face because today's referees won't allow it.

He doesn't have a growl to his voice because today's huddles don't require it.

He doesn't have fire in his eyes because today's teams don't need it.

Tom Brady is fantastic, but he's formula. He's a champion, but he's a creation. And to anoint him as the best quarterback ever would be to forget that his position was invented, inspired and made famous by those who were neither.

If Brady leads the New England Patriots to a Super Bowl win over the New York Giants next Sunday, everyone will celebrate his four world championships.

They will forget that Otto Graham won seven league championships.

Everyone will marvel at Brady's 15-2 postseason record.

They will forget that Bart Starr was 9-1 in the postseason with a record 104.8 passer rating.

Everyone will wax about how, in two Super Bowls, Brady led his team on late fourth-quarter game-winning field-goal drives. 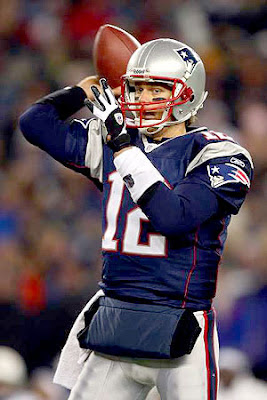 They will forget that, in one of his four Super Bowl championships, Joe Montana drove his San Francisco team 92 yards for a last-second, game-winning touchdown.

Everyone will applaud Brady for his tough defender's mentality.

They will forget that Slingin' Sammy Baugh actually played defense, picking off 31 passes in his career, which is more than he threw in his last three seasons combined.

Everyone will predict that Brady's 92.9% completion rate in the playoffs against Jacksonville is a record that will never be broken.

They will forget that Johnny Unitas once threw touchdown passes in 47 consecutive games, a record that will truly never be broken.

Yeah, everyone will forget Johnny Unitas.

He was the catalyst in the 1958 championship game between his Baltimore Colts and the New York Giants, an overtime victory by the Colts that changed pro football forever.

He was the first true quarterback of the modern era, setting the bar for toughness and accountability.

"You can look at all the numbers you want," said Dan Fouts, former San Diego Chargers great. "But to me, being a quarterback is all about a feeling." 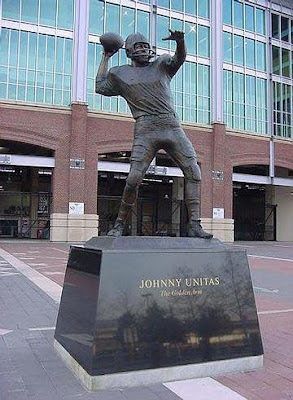 Nobody illustrated that feeling better than Unitas. He was football's Babe Ruth, and Bart Starr was its Lou Gehrig, and Sammy Baugh was its Ty Cobb, and Joe Montana was its Joe DiMaggio.

Rodriguez is great, he's headed for the Hall of Fame, but he will retire as neither the greatest third baseman nor shortstop in history.

Put him in the history books. But put him in context. Same goes for Brady.

"I hear all these people talking about Tom Brady and I just sort of smirk," said John Unitas Jr., the late quarterback's son. "It's an entirely different game. I'm biased, but what my father did, you can't compare it to anything today."

Start with the snap.

While Brady is famous for his "decision making," many of those decisions have actually been made for him by his offensive coordinators.

The Patriots' game plan is more homework than instinct, more science than scrabble.

Unitas, meanwhile, was renowned for once telling offensive coordinator Don McCafferty to "Sit back and enjoy the game, I won't need any help."

"My father never had a microphone in his helmet," said Unitas Jr. "He would study film two hours every night in the basement, figuring out his own plays."

Brady has been blessed with rules that prohibit defenders from taking cheap shots at the quarterback. This, combined with a strong offensive line, has allowed him to stand in the backfield poring over possible receivers for what seems like hours. 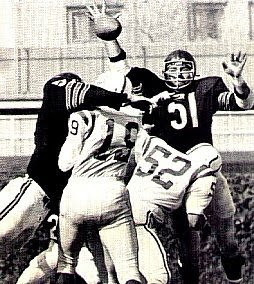 The ancient quarterbacks survived with no such rules, with defenders hitting them every play, smaller guys than today, but hits nonetheless.

There is a reason that one of most famous quarterback photos is not of Tom Brady pumping his fist into the air, but of Y.A. Tittle kneeling with blood trickling down his head.

"The beating those guys took was tremendous," Unitas Jr. said.

Finally, there is the pass.

Brady's receivers are protected by today's rules, to the extent that defensive backs cannot even accidentally graze them.

The ancients' receivers were routinely tackled. The mere act of putting the ball in the air was a gamble.

"My father played when there were mostly running offenses," Unitas Jr said. ''My father was the other way."

In 1959, Unitas' league-leading total of 32 touchdown passes was more than 50% higher than his closest competitor, Pittsburgh's Bobby Layne, who threw for 20.

Brady threw for a record 50 touchdowns this season, but he is playing in an era when career and season passing records are falling faster than Green Bay snow.

Brady is playing in an era when the following scenario would never happen:

Playing in overtime for the league championship, having driven his team to his opponent's eight-yard line, a quarterback decides to pass.

That was Unitas, 50 years ago. His Colts were in position to kick a field goal to beat the Giants for the title. Yet he saw a hole in the defense and threw a seven-yard pass to Jim Mutscheller to set up Alan Ameche's one-yard touchdown run. 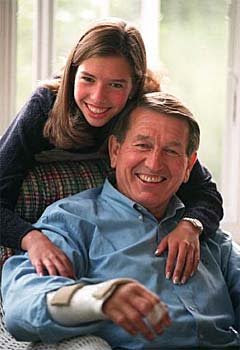 "My father controlled the game," said John Unitas Jr. "He stuck it all out there."

Today, Tom Brady stands alone. In this history of professional football, he stands in line.

Bill Plaschke can be reached at bill.plaschke@latimes.com. To read previous columns by Plaschke, go to latimes.com/plaschke.
Posted by jtf at 10:19 PM