MIKE VACCARO: UNTIL THE END, IT WAS ALWAYS ABOUT A-ROD 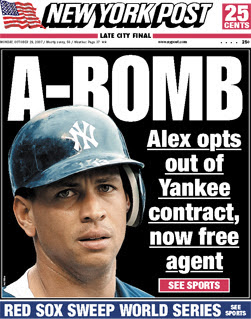 October 29, 2007 -- DENVER - In the end, this is the most appropriate way this latest twist in the Chronicles of A-Rod had to go. From the moment he first donned Yankee pinstripes on that all-smiles February day in 2004, he swore he would never make the most famous team in sports about Alex Rodriguez. He would be one of 25.

“If you're looking for a squeaky wheel," he said, “you'd better look somewhere else."

And yet, as we came to know quickly, and as we learn right to the bitter end, it was always all about A-Rod, is always about A-Rod. It was about his astonishing talent and his astounding ego. It was about watching the greatest regular-season player of his generation and one of the most star-crossed October players of all time.

And if this is indeed his final dash out the side door - and if we are to take the Yankees at their word, it is absolutely that - then it comes as part of a perfect A-Rod opera, a me-first symphony that would be appalling if it weren't so predictable.

A-Rod's decision to opt out on his contract is not only the biggest story in New York this morning - obscuring, among other things, the fact that Joe Girardi is going to be made an official offer to manage the team today - but it also big-foots the very sport from which A-Rod now intends to bleed his $300 million booty.

And if you think that's coincidence, then you've missed A-Rod's act these past four years. Too bad, too. As it turns out, it was a limited run.

Vintage A-Rod. Yesterday was a busy day in the A-Rod camp when it came to showing up baseball, reminding the sport who's the bat and who's the ball. He blew off pregame ceremonies announcing him as a winner, along with Prince Fielder, of the Hank Aaron Award, meaning he all but spit on Aaron's shoes from a faraway perch. But that was merely the warm-up.

“He was just too unsure with new ownership talking about a transition where the organization is going right now," A-Rod's agent, Scott Boras, told the Post's Joel Sherman last night. “He is not sure what is going to happen with (free agents) Mariano (Rivera) and (Jorge) Posada, and if Andy Pettitte is coming back. He needs more time to assess where the Yankees are going in the future."

Sure. As if the Yankees are suddenly going to embrace the ways of the Pirates, Royals and Devil Rays. Beautiful. A prefabricated phony clear to the end.

Don't blame Boras for this. A-Rod had to know how malodorous the timing of this is. If he cared, he sure didn't do anything about it. All about A-Rod. On Day 1, the all-smiles day at the Stadium Club nearly four years ago. And last night, too. All About A-Rod.

If this is really it?

Good luck to him, then.