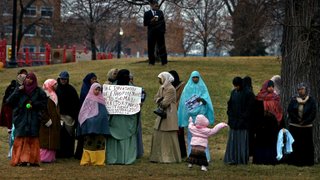 The Somali jihad is over for now, but it still has supporters worldwide – including within the United States.

The southern Somali city of Kismayo has fallen to a combined force of Ethiopian and Somali troops. The Somali Supreme Islamic Courts Council regime ruled Mogadishu for only a few months, instituting a particularly draconian version of Sharia. Now its leaders have fled, and the remnants of their forces are now trapped between the sea and Somalia’s border with Kenya. “Nobody expected the Islamists to show this little political resilience. They were the first movement to pacify southern Somalia for 16 years, yet they crumbled like a pack of cards,” said Matt Bryden of the International Crisis Group.

Despite reports in the Western press suggesting that Somalis were happy with the Sharia regime of the Islamic Courts, Mogadishu residents cheered the anti-jihad troops as they entered the city last Thursday. However, there were several indications that the Islamic Courts were indeed popular, especially with expatriate Somalis. In an Oslo café, a Somali named Zakharia Ahmed vowed: “If the Ethiopians continue to occupy Somalia, we won’t sit here. We will go back to Somalia and fight as one!” His companions responded, “Yes, we will go back and fight.” Another Somali, Abdi Muhamed, added: “There is virtually no one in Somalia, or Somalians here in Norway, who do not support the Islamist regime.”

The Islamic Courts also had supporters in the United States. Last Saturday, 1,500 Somalis gathered in Minneapolis’ Peavey Park for a demonstration in favor of the Sharia regime and against American support for the Ethiopian and Somali forces that toppled it. Hassan Mohamud, imam of St. Paul’s Al-Taqwa Mosque, who teaches Islamic law at William Mitchell College of Law and is also president of the Somali Institute for Peace and Justice, the group that organized the demonstration, won cheers from the crowd as he thundered: “We ask the president of the United States, Mr. Bush, and his administration to stop supporting the terrorists. Ethiopian troops are terrorists.” Mohamud has praised the Islamic Courts regime for bringing “peace and security to a large part of the country within 16 days where the international community could not help the Somalis for 16 years.” When asked if Somalis based in Minnesota were supporting the jihadists financially, Mohamud responded: “What I know is that they have overwhelming support inside of Somalia because of the peace and law and order. If you have the support of your people inside of Somalia you don’t need any support from outside.”

The peace and law and order that the Islamic Courts brought to Somalia was decidedly a matter of brute force and intimidation. In November 2005 Sharia supremacists in Mogadishu killed twelve people in the process of closing down movie theaters and video stores, both of which had been deemed un-Islamic. Last July they killed two people at a forbidden screening of a World Cup match. The regime staged public floggings and executions, banned television, music, and women swimming, and in one town a cleric aptly named Sheikh Rage announced that anyone who did not attend Muslim prayers five times a day would be beheaded. The regime repeatedly declared jihad on Ethiopia, making no secret of the expansionist aspirations that eventually led the Ethiopians to take action: Yusuf Mohamed Siad, an Islamic Courts defense official, declared Somalia open to mujahedin from around the world: “We’re saying our country is open to Muslims worldwide. Let them fight in Somalia and wage jihad, and God willing, attack Addis Ababa.”

Emblematic also of the nature of the Islamic Courts regime were statements by a Mogadishu cleric affiliated with the movement, Sheikh Abubukar Hassan Malin, after Pope Benedict XVI’s address in Regensburg, Germany that aroused Muslim ire worldwide: “We urge you Muslims wherever you are to hunt down the Pope for his barbaric statements as you have pursued Salman Rushdie, the enemy of Allah who offended our religion. Whoever offends our Prophet Mohammed should be killed on the spot by the nearest Muslim. We call on all Islamic Communities across the world to take revenge on the baseless critic called the pope,” said Malin.

The Islamic Courts’ first vice chairperson, Sheikh Al-Rahman Mohomood Jinikow, stated in September that “we will only approve a constitution based on theology, because an Islamic constitution is the only one that serves all of us justly. Secular constitution, whether it is democratic or any other, is never fair and right, and Muslims have only one constitution which is entirely based on Allah’s Qur’an.”

That seemed to be fine with the demonstrators in Minneapolis. Some carried signs that read, “Islam is the solution.” Abdul Mohamed, a member of the Somali Institute for Peace and Justice, denounced American policy toward Somalia as motivated by “Islamophobia.” Given the nature of the Islamic Courts regime, this raises questions that have less to do with Somalia than with Minneapolis and the United States. What are 1,500 supporters of Islamic jihad and Sharia law doing in Minneapolis? What are the implications of this for our own national security? Would these immigrants prefer to live under Sharia than under the United States Constitution? Why do immigration officials do absolutely no screening for Sharia supremacism, even though the U.S. is embroiled in a global war against Sharia supremacists? Why is no one with any power or influence even asking these questions?

The Somali Institute for Peace and Justice’s demonstration in Minneapolis was simultaneously a demonstration in favor of Sharia government in Somalia and, unwittingly, of the crying need for serious and searching immigration reform. One may only hope that at least some American officials understood it as such.

Robert Spencer is a scholar of Islamic history, theology, and law and the director of Jihad Watch. He is the author of six books, seven monographs, and hundreds of articles about jihad and Islamic terrorism, including Islam Unveiled: Disturbing Questions About the World’s Fastest Growing Faith and the New York Times Bestseller The Politically Incorrect Guide to Islam (and the Crusades). His latest book is the New York Times Bestseller The Truth About Muhammad.
Posted by jtf at 9:46 AM