I Just Called to Say I Love You

The sounds of 9/11, beyond the metallic roar.

Everyone remembers the pictures, but I think more and more about the sounds. I always ask people what they heard that day in New York. We've all seen the film and videotape, but the sound equipment of television crews didn't always catch what people have described as the deep metallic roar. 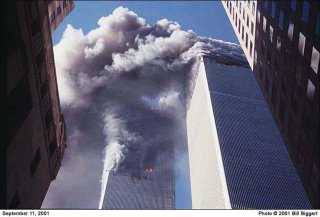 The other night on TV there was a documentary on the Ironworkers of New York's Local 40, whose members ran to the site when the towers fell. They pitched in on rescue, then stayed for eight months to deconstruct a skyscraper some of them had helped build 35 years before. An ironworker named Jim Gaffney said, "My partner kept telling me the buildings are coming down and I'm saying 'no way.' Then we heard that noise that I will never forget. It was like a creaking and then the next thing you felt the ground rumbling."

Rudy Giuliani said it was like an earthquake. The actor Jim Caviezel saw the second plane hit the towers on television and what he heard shook him: "A weird, guttural discordant sound," he called it, a sound exactly like lightning. He knew because earlier that year he'd been hit. My son, then a teenager in a high school across the river from the towers, heard the first plane go in at 8:45 a.m. It sounded, he said, like a heavy truck going hard over a big street grate.

I think too about the sounds that came from within the buildings and within the planes--the phone calls and messages left on answering machines, all the last things said to whoever was home and picked up the phone. They awe me, those messages.

Something terrible had happened. Life was reduced to its essentials. Time was short. People said what counted, what mattered. It has been noted that there is no record of anyone calling to say, "I never liked you," or, "You hurt my feelings." No one negotiated past grievances or said, "Vote for Smith." Amazingly --or not--there is no record of anyone damning the terrorists or saying "I hate them."

No one said anything unneeded, extraneous or small. Crisis is a great editor. When you read the transcripts that have been released over the years it's all so clear.

Flight 93 flight attendant Ceecee Lyles, 33 years old, in an answering-machine message to her husband: "Please tell my children that I love them very much. I'm sorry, baby. I wish I could see your face again."

Thirty-one-year-old Melissa Harrington, a California-based trade consultant at a meeting in the towers, called her father to say she loved him. Minutes later she left a message on the answering machine as her new husband slept in their San Francisco home. "Sean, it's me, she said. "I just wanted to let you know I love you."

Capt. Walter Hynes of the New York Fire Department's Ladder 13 dialed home that morning as his rig left the firehouse at 85th Street and Lexington Avenue. He was on his way downtown, he said in his message, and things were bad. "I don't know if we'll make it out. I want to tell you that I love you and I love the kids."

Firemen don't become firemen because they're pessimists. Imagine being a guy who feels in his gut he's going to his death, and he calls on the way to say goodbye and make things clear. His widow later told the Associated Press she'd played his message hundreds of times and made copies for their kids. "He was thinking about us in those final moments."

Elizabeth Rivas saw it that way too. When her husband left for the World Trade Center that morning, she went to a laundromat, where she heard the news. She couldn't reach him by cell and rushed home. He'd called at 9:02 and reached her daughter. The child reported, "He say, mommy, he say he love you no matter what happens, he loves you." He never called again. Mrs. Rivas later said, "He tried to call me. He called me."

There was the amazing acceptance. I spoke this week with a medical doctor who told me she'd seen many people die, and many "with grace and acceptance." The people on the planes didn't have time to accept, to reflect, to think through; and yet so many showed the kind of grace you see in a hospice.

Peter Hanson, a passenger on United Airlines Flight 175 called his father. "I think they intend to go to Chicago or someplace and fly into a building," he said. "Don't worry, Dad--if it happens, it will be very fast." On the same flight, Brian Sweeney called his wife, got the answering machine, and told her they'd been hijacked. "Hopefully I'll talk to you again, but if not, have a good life. I know I'll see you again some day."

There was Tom Burnett's famous call from United Flight 93. "We're all going to die, but three of us are going to do something," he told his wife, Deena. "I love you, honey."

These were people saying, essentially, In spite of my imminent death, my thoughts are on you, and on love. I asked a psychiatrist the other day for his thoughts, and he said the people on the planes and in the towers were "accepting the inevitable" and taking care of "unfinished business." "At death's door people pass on a responsibility--'Tell Billy I never stopped loving him and forgave him long ago.' 'Take care of Mom.' 'Pray for me, Father. Pray for me, I haven't been very good.' " They address what needs doing.

This reminded me of that moment when Todd Beamer of United 93 wound up praying on the phone with a woman he'd never met before, a Verizon Airfone supervisor named Lisa Jefferson. She said later that his tone was calm. It seemed as if they were "old friends," she later wrote. They said the Lord's Prayer together. Then he said "Let's roll."

This is what I get from the last messages. People are often stronger than they know, bigger, more gallant than they'd guess. And this: We're all lucky to be here today and able to say what deserves saying, and if you say it a lot, it won't make it common and so unheard, but known and absorbed.

Ms. Noonan is a contributing editor of The Wall Street Journal and author of "John Paul the Great: Remembering a Spiritual Father," (Penguin, 2005), which you can order from the OpinionJournal bookstore. Her column appears Fridays.
Posted by jtf at 4:40 PM

Email ThisBlogThis!Share to TwitterShare to FacebookShare to Pinterest
Labels: 9/11/01, Islam and Terrorism