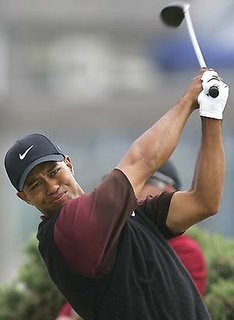 NOT long after Tiger Woods completed his 65 on Saturday to share the lead going into yesterday’s final round of the 88th P.G.A. Championship, he was asked a question. After he missed the 36-hole cut with two rounds of 76 in the United States Open at Winged Foot two months ago, could he have imagined being this close to winning three consecutive tournaments, two of them majors?

“If you enter a tournament, your goal is to win a tournament,” he said. “I figured I was going to enter a few tournaments after the U.S. Open, so yes.”

Yes indeed, because when he was asked not long afterward what his best attribute as a golfer was, he quickly replied, “My mind.”

Woods wasn’t boasting. He was just answering the question honestly. And for all of his talent as a ball striker and as a putter, that mind is what has put Tiger Woods up there in the golf clouds with all the other golf gods of all the other golf eras. That mind, with its sheer determination and tactical genius. That mind, which led him to his 12th major title and third P.G.A. Championship yesterday with a four-under-par 68 for an 18-under total at Medinah No. 3.

Asked if he ever felt sorry for his challengers, Woods smiled and said, “No.”

Perhaps nobody in golf, not even Jack Nicklaus or Ben Hogan, possessed the killer instinct that Woods thrives on. And he again won it his way, with as much strategy as power. Just as he mostly used his 2-iron off the tee to win the British Open on the brown, hard Royal Liverpool links, here he often depended on his 5-wood off the tee to Medinah’s pillow-soft green fairways, especially on the dogleg holes.

“With the driver, I would’ve worried about hitting through the fairway into the rough. With the 5-wood, I can take 20 or 30 yards off it and I can juice it as well, step up and hit it further. It was a perfect club.”

Since missing the cut at Winged Foot, where he was a rusty 12 over par for two rounds after eight weeks away from the PGA Tour, Woods has approached perfection. He tied for second at the Western Open at nearby Cog Hill, won the British Open at Royal Liverpool, won the Buick Open in Grand Blanc, Mich., and won the P.G.A. Championship at Medinah for a second time, after winning his second major there in 1999. Over those 16 rounds, he was 71 under par.

There were no tears this time, unlike at the British Open, where he sobbed and shook while hugging his wife, Elin, after holing out on the final green, a reaction to the death of his father, Earl, in May. But one of his headcovers had a Thai phrase on it in honor of his mother, Tida.
“It means, ‘Love from Mom,’ ” Woods said. “It’s her way of saying that she’s always there with me. Even though she can’t be there physically, she’s always there each and every round I play. It’s always comforting to look at that and know she’s always there in spirit.”

•At 30, Woods, with at least two majors in a year for the fourth time in his 10-year career as a professional, has won 12 of his first 40 majors as a pro — eight ahead of Jack Nicklaus’s pace en route to his record 18 majors. Nicklaus needed 48 majors before he won his 12th, the 1973 P.G.A. at Canterbury in Cleveland when he was 33.

“It’s still a long way away,” Woods said, alluding to Nicklaus’s total. “It took Jack over 20 years to do. It’s going to take a career, and I’ve just got to keep plugging along and keep trying. The majors are the most fun to play. I thoroughly enjoy coming down the stretch on the back nine with a chance to win it.”

Woods’s 12 majors, one short of Bobby Jones’s total — which included five United States Amateurs and one British Amateur, which were considered majors in his era — moved him ahead of Walter Hagen’s total of 11. Hagen won two United States Opens, four British Opens and five P.G.A. Championships.

So add those consecutive-year streaks by Hagen and Jones to Nicklaus’s record 18 majors, if only to give Tiger Woods something else to shoot for. And something for him to think about with that mind.
Posted by jtf at 7:28 AM