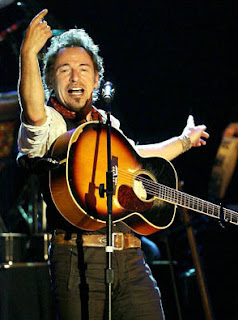 'The Boss' doesn't forget the fun

More than a handful of moments during Wednesday's Bruce Springsteen concert sparked memories of the musician's wild and innocent early days.

Before the simultaneous cover appearances on Time and Newsweek magazines, before the oversaturated success of "Born in the U.S.A.," and before Hollywood handed him an Academy Award, there were absurd lyrics, over-the-top instrumentation and a sense of fun when fun wasn't necessarily in style.

Springsteen brought all of his old-school tricks to Verizon Wireless Music Center for the fourth stop of his "We Shall Overcome" U.S. tour, yet most of his words were borrowed.

"Overcome" is a covers album of old-time songs associated with folk music icon Pete Seeger, and things don't get much sillier than the two songs that bookend the project -- "Old Dan Tucker" and "Froggie Went a Courtin'."

Springsteen performed loose-limbed versions of both tunes Wednesday, with "Froggie" being a rarity earned thanks to one young fan's gift of a plush toy frog.

Much weightier topics were addressed, of course, but the Rock and Roll Hall of Famer maintained his mission to entertain throughout the 2 1/2-hour performance.

"My Oklahoma Home," a downtrodden tale from the Dust Bowl era, showcased the breadth of the program within one song.

After featuring just Springsteen and his acoustic guitar, "Oklahoma" expanded to segments featuring a Western swing solo played on pedal-steel guitar and exaggerated wailing from a four-man horn section.

The singer sold the tune's gallows humor through the line, "Everything except my mortgage blowed away." Realizing that misery loves company, the audience echoed the song's refrain of "Blowed away" with gusto.

When Springsteen dipped into his own catalog, 1982 album "Nebraska" provided two highlights as well as the evening's only misstep:

• The show began with a surprise visit to "Atlantic City," which benefited from a striking banjo riff and a persistent drum beat. The instruments have been around for centuries, but the tune resembled a cutting-edge remix commissioned for "The Sopranos."

• "Open All Night" mashed a rapid spoken-word performance by Springsteen against a exuberant Big Band arrangement. By the time the clinching line of, "Hey, ho, rock 'n' roll, deliver me from nowhere," arrived, the pavilion erupted in cheers.

• Too much joy was heard, however, in the reworked "Johnny 99." A song in which the protagonist begs for death row is no picnic, regardless of the whistles and bells you hang on it.
Everywhere else, the flexibility of the 16-member Seeger Sessions Band (vocalist Patti Scialfa was absent) worked in Springsteen's favor.

When he needed harmony for "Overcome's" title track -- a civil-rights anthem that deserves a positive reputation on par with John Lennon's "Imagine" -- three backing vocalists answered the call.

And for earthy truths in songs such as "John Henry," attention turned to a pair of violinists and a banjo player.

Springsteen's workload on Wednesday may have rivaled "Henry's" hammering hero. And despite playing to a modest audience of less than 4,000, he also seemed to have a very good time.