Robert Ferrigno: The Making of 'Prayers for the Assassin' 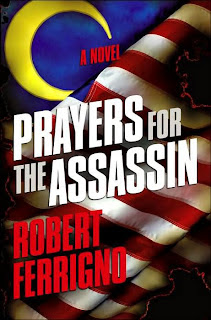 If I had never ditched church, stolen the family car and gone to the bowling alley with Carla Johnson, I might not have written Prayers for the Assassin. I was sixteen at the time, attending a fundamentalist southern Presbyterian church under great duress. Carla wasthe hottest girl in the congregation, the wild-eyed daughter of a church elder. We spent a couple hours at the bowling alley where we listened to loud music and rubbed thighs while playing pinball, the trifecta of sin in those more innocent times. That was the end of my formal church attendance.

While I left church, the church didn't leave me. As Simone de Beauvoir, a French atheist put it, "you can abolish water, but you can't abolish thirst." Amen to that. I've been writing crime thrillers for the last fifteen years, and for some time I had given thought to writing a crime novel about a man who lost his faith, and suffered the loss badly, a cop more interested in justice than legalisms and failing at both.

9-11 changed these plans. I live on the West Coast but get up early. I was watching the news when the second airplane hit the World Trade Center, and knew the world was changed forever. In the weeks that followed, I realized that my hero who had lost his faith would be a Muslim warrior.

The premise of Prayers for the Assassin is that the USA loses the war on terror and becomes an Islamic republic. I make it clear that the USA was never defeated militarily, but bled white by a conflict without end, weakened internally by dissent, economic malaise, and a consumer culture hostile to people's thirst for meaning in their lives. A lot of people have asked me if I think such a thing could really happen. As always, the answer can be found in The Godfather.

There's a great scene in Godfather II, where Michael Corleone goes to Havana to deliver twelve million dollars to the Batista government to set up some casinos. On the drive from the airport to the presidential palace, Michael sees a young rebel blow himself up with a grenade, taking out the military police attempting to arrest him. While his partner, Hyman Roth dismisses the chances of Castro's rebels being successful, Michael is discomforted, noting that the soldiers are paid to fight, but the rebels are dying for what they believe in. I think this is the key to the world of Prayers for the Assassin.

We live in an innovative, sectarian nation, which values personal freedom and creativity, but it also leaves us shortsighted and vulnerable, demanding quick fixes and steady progress. In a generation-long war, technology will not matter as much as the absolute belief in the rightness of one's cause and the willingness to die for those beliefs. The ongoing and deadly hostility between the Sunni and the Shiite branches of Islam stems from the martyrdom of Imam Hussein, the grandson of the prophet Muhammad, in a battle over 1300 years ago. Can you remember who won the World Series two years ago? Which culture do you think is better equipped spiritually to fight a fifty-year war?

In contrast to the moral certainty of Islam, we have the flabby pieties of our own leaders. George Bush talked about angels watching over the U.S. after 9-11, and then suggested that we all go shopping, lest the terrorists win. John Kerry's Catholicism was high on his resume when he ran for president, but he was unapologetic about his thirty-year record of voting against any limits on abortion, in clear violation of the most basic tenets of his Catholic faith. Now try to imagine an Islamic politician stumping with a ham sandwich in his hand, or suggesting that shopping is the best defense, and ask yourself what kind of leader would you trust to lead you through dark and perilous times? Moral ambiguity and cultural relativism are luxuries when the ground shakes beneath your feet.

Try this on for size. On October 23, 2001, six weeks after 9-11, David Weston, president of ABC News, told an audience at the Columbia University Graduate School of Journalism, that he didn't have an opinion as to whether the Pentagon was a legitimate target. "As a journalist I feel strongly that's something that I should not be taking a position on. I'm supposed to figure out what is and what is not, not what ought to be." Weston's sense of objectivity mirrors a statement former CBS News anchor made during a PBS discussion some years ago. Rather said that if he was attached to a Viet Cong patrol in his capacity as a newsman, and the Viet Cong were about to ambush American soldiers, he would not warn the Americans. Good night and good luck, Dan.

I sometimes think that people who can't imagine American's converting to Islam are deaf to the serenity and comfort of a deep religious faith. In my research, I discovered many aspects of Islam that I found appealing, particularly the sense of worldwide community. One of my favorite parts of the book is when the hero, Rakkim, is walking through the streets of Seattle at dawn and hears the call to prayer.

Rakkim stood there in the pink glow of daybreak, trembling with the sound, the perfect resonance. One heart. One soul. One God. He hadn't prayed in three years, but he found himself mouthing the words of the muezzin as people hurried past him toward the mosque, businessmen in three-piece suits, teenagers in jeans, women leading children by the hand, urging them on so as not to be late. Congregational prayers were said to be twenty-seven times better than individual prayers, and greater blessings were given to those who were first inside. In a few minutes the faithful would be on their knees, facing toward the Ka'aba in Mecca, a perfectly synchronized wave of submission, selfless and infinite, rolling through eternity. Rakkim watched them rush to mosque and he envied them their devotion.

I spent over two years researching the book, everything from theology and geopolitics to small unit battle tactics and the proper position of the hands and feet during Muslim devotions. As a former reporter, I utilized facts to bolster the story, from dietary proscriptions, to the second-class status of Christians under Islamic law, to the nature of the main antagonist in the book. This character, known as the Wise Old One, is in fact a figure from Islamic lore, the Mahdi, a descendent of Muhammad, who will someday unite all Muslims at their time of greatest crisis, and go on to conquer the world. I took great pains to internalize my research so as not to get in the way of telling a good story. My intention was always to tell a tale, to write a novel filled with love and violence and betrayal, a thriller set in the future that makes you forget it's not happening right now. If you read the first page and are not eager to turn to the next, then I've failed.

About Excerpt Making of
Posted by jtf at 6:59 AM

Email ThisBlogThis!Share to TwitterShare to FacebookShare to Pinterest
Labels: Books and Things, Islam and The West