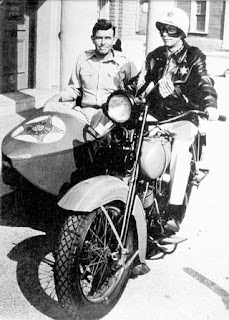 February 27, 2006
The New York Times
Don Knotts, Ever Proud to Be a Bumbler
By VIRGINIA HEFFERNAN

Don Knotts was a high-status comic who played low-status roles. Actors who worked with him almost universally deferred to him as a comedic grandmaster, yet his characters were not jokers but the butts of jokes. He was absolutely flappable. No one had a better tremor or double-take, and with his unmistakable homeliness — bulging eyes, receding chin, stooped shoulders, broad hips — he didn't bother to play the wise fool; he wisely stuck to just the fool.

Of Barney Fife, Mr. Knotts's character on "The Andy Griffith Show," Billy Bob Thornton said, "Don Knotts gave us the best character, the most clearly drawn, most perfect American, most perfect human ever."

Mr. Knotts, who died Friday, grew up during the Depression, in Morgantown, W.Va., where his mother leased a house and took in boarders. He slept in the kitchen. His older brothers, Sid and Shadow, were funny, but they also drank and fought, and Shadow died of an asthma attack while Don was a teenager. Their father, who had suffered hysterical blindness and a nervous collapse before Don was born, rarely left his bed.

The Depression was a high time for Mr. Knotts's act. He practiced magic and ventriloquism for the neighbors and the boarders, many of whom were students or jobless and welcomed satire.
When World War II came, his friends thought the Army wouldn't take him, since he looked unwell and undernourished, but he ended up serving out his duty as a comedian in the Stars and Gripes, a revue that played in the South Pacific. At first, he performed only with his ventriloquist dummy, Danny, but one day he caught Red Ford, an older Texas comic, staring at him and laughing. "You know something?" Mr. Knotts remembered Ford saying in "Barney Fife, and Other Characters I Have Known," his 1999 autobiography. "You're a funny little son of a bitch."

He was a generous performer who liked to share the stage, and he thrived in duets, teams, variety shows, ensembles. Back in New York, he noticed a man whose hands shook and who spilled water; he combined that with Robert Benchley's famous apologetic speaker from the monologue "Treasurer's Report," and the nervous character, who went on to fame on "The Steve Allen Show," was born.

Mr. Knotts plainly stole stuff, and other comics didn't mind lending him material. He was wonderfully unthreatening to other male comics, all of whom could think of themselves as one step closer to leading men than Mr. Knotts was. It's hard to think of an actor, in fact, who got more helping hands than Mr. Knotts in his early days. Male actors were forever offering him parts, trying to get him to join their acts. Sharing the stage with this skinny, spazzy guy could only make them look more commanding.

Among these mentors was Andy Griffith, whom he met when they were both cast in the play "No Time for Sergeants" in 1955. Mr. Griffith and Mr. Knotts cracked each other up. A few years later, when Mr. Knotts proposed himself as a deputy to Andy Taylor on Mr. Griffith's sitcom, Mr. Griffith went for it. Andy's crinkly, deep-set eyes conveyed calm and sagacity, while Barney's popped ones expressed pure anxiety — something akin to horror at the demands of ordinary life.

Mr. Knotts's popular movies, "The Ghost and Mr. Chicken," "The Incredible Mr. Limpet," "The Reluctant Astronaut" and "The Shakiest Gun in the West," put him on a winning streak. To comedy geeks, especially the preteen kind, his send-up of 60's superheroism came as a delight and a relief.

One by one, Mr. Knotts mocked the pretenses of the comic actor who often has his eye on nobler pursuits. In the nervous man, he reveled in the discomfort that most comics tend to pass off as indignation or savoir-faire. As Barney, he satirized swagger and self-importance. Finally, on "Three's Company" in the late 70's and 80's, he sent up the comedian's hypersexuality, which is often his pride. Mr. Knotts, over and over, was willing to play the desperate, pathetic low-man-on-every-pole. He did it so well — never forsaking his persona and trying to seize the lead, as nearly all major comedians do these days — that his talent for abasement became a source, paradoxically, of great authority. By revealing but never indulging these pretenses, he enlightened everyone he worked with, and his audiences.

And once in a great while he even got to be the hero. On "The Loaded Goat," a winning episode of "The Andy Griffith Show," it's Barney who saves the day. Playing an achingly melancholy song on his harmonica, he leads a dangerous goat, which has swallowed dynamite, out of town.
Posted by jtf at 1:28 PM