SEATTLE - Already designated a depleted species under one federal act, Washington state's killer whale population is getting more federal protection under another.

Since 2002, the orcas have been protected under the Marine Mammal Protection Act, which kept them from being killed or harassed, but their listing under the Endangered Species Act gives them the highest protection available under the law.

The listing was announced in November but goes into effect Thursday. 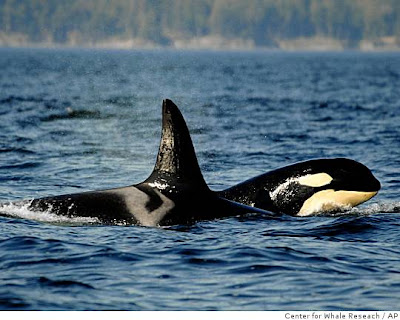 A female orca, or killer whale, travels with a calf near the San Juan Islands in Washington

The three pods of orcas that live in Puget Sound from late spring through early fall, known as the southern resident orca population, total 89 whales. That's down from more than 100 in the middle of the last century but up from a low of 79 in 2002. The decline has been blamed on pollution and a drop in the population of salmon, their primary food.

The National Marine Fisheries Service will upgrade its orca conservation plan because of the new designation. One of the first steps is defining the whales' critical habitat, said Bob Lohn, the agency's Northwest regional director.

Federal agencies will need to consult with NMFS to make sure activities they plan in areas designated as critical habitat don't harm the orcas, Lohn said.

"If you don't protect the homes they need to survive, you can't expect them to start recovering," said Brent Plater, with the Center for Biological Diversity.

Lohn said NMFS officers would start monitoring whale-watching operations more closely. There are no proposed changes in its rules, which bar harassment of orcas and operation of engines within 100 yards of the mammals.

Some environmentalists cheered the listing.

"People are beginning to understand just how unique and amazing they are and how lucky we are to have the southern resident population in this urban fishbowl," said Susan Berta of Orca Network.

Others, however, were more cautious, noting that the Bush administration has been pushing to reshape the Endangered Species Act.

If the act is rolled back, "you can rest assured that the legal protections that the southern residents need and deserve to survive and recover will be lost," said Plater.
___
On the Net:
National Marine Fisheries Service: http://us.rd.yahoo.com/dailynews/ap/ap_on_sc/storytext/endangered_orcas/18091184/SIG=10p3p94i7/*http://www.nwr.noaa.gov
Posted by jtf at 11:27 AM