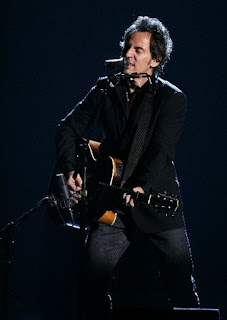 The Boss takes his fans to the promised land in a solo Northrop show
Jon Bream, Star Tribune
Last update: October 13, 2005 at 1:18 AM

Bruce Springsteen may have grown up Catholic, but he chose the Jewish Day of Atonement to redeem himself in Minneapolis.

Performing a soldout solo concert Wednesday at Northrop Auditorium, he redeemed himself for his solo show in May at St. Paul's Xcel Energy Center. Set up as a "theater" for 7,996 people in half the arena, Xcel was too big for Springsteen's one-man show. It was powerful, thought-provoking art, but not arena-worthy entertainment. What was missing was the human touch, which was in abundance at Northrop.

Springsteen, 56, seemed more relaxed, warmer and more talkative this time. And the intimacy of Northrop made a huge difference. With the walls close enough that all 4,700 concert-goers could actually read the red "exit" signs, you could feel the Boss' presence, notice the nuances of his grimaces and hear the one-liners he dropped (something he didn't even attempt in the impersonal Xcel).

Although he wasn't as whimsical as he was during his 1996 Northrop solo show, Springsteen made his 26-song, 140-minute performance very personal and very special. Before and after songs, he commented on lyrics and life. "It's time to bring the ukulele back; size does not always count," he said after playing a uke on "I Wanna Marry You" (during which he changed the lyric from "ring" to "I'd be proud if you'd wear my name hyphenated.")

The New Jersey hero told a long-winded story about growing up in a big Catholic family surrounded by various relatives (the Irish ones on one block, the Italian ones on another street). He and his sister would pick up the rice after weddings (Mom liked to see the bridal gowns), and they had so much rice that they threw it at funerals, too, he joked.

All this introduced "Jesus Was an Only Son," a spiritually tinged tune about the relationship between parent and child from Springsteen's current "Devils & Dust." Twice during the song on grand piano, the singer went off on talking tangents, relating funny, fictional tales about what Jesus did.

These kind of mirthful moments helped balance a set that was more down-tempo than demonstrative, more stripped-down than full of superstar turns, and more pensive than populist. To be sure, he threw in a handful of hits completely recast, including "Darkness on the Edge of Town" and "Thunder Road," which he heretofore hadn't done on this solo tour, which started in April.

He repeated only eight songs -- mostly from "Devils & Dust" -- that he had done at Xcel. This time, he added a new instrument, an autoharp (for "The New Timer" from 1995's "Ghost of Tom Joad") to an arsenal that included electric and acoustic guitars, harmonica, pump organ and electric piano.

Emotionally, the music covered a full spectrum -- birth, dreams, marriage, parenthood, yearning, struggles, redemption, death. You could see the yearning in his eyes and hear it in his voice on "Two Hearts." And you could feel the hope in the meditative "Promised Land," as he ended with a falsetto croon, dancing in the dark, taking 4,700 believers with him to that sacred place.