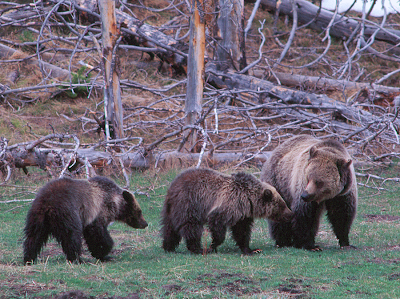 BOZEMAN, Mont. - By all accounts the turnaround of the Yellowstone grizzly is an all-too-rare success story of the Endangered Species Act.

After dwindling to 200 or so by the 1970's, the number of the big bears in the mountains and grassy meadows around Yellowstone National Park has grown to more than 600, thanks to the federal protections given to the species in 1975.

"It's the biggest success story under the Endangered Species Act because grizzly bears are one of the toughest species to manage," said Chris Servheen, who has been working on efforts to protect and to re-establish grizzlies in Yellowstone and elsewhere for 25 years and is coordinator for grizzly bear recovery for the Federal Fish and Wildlife Service in Missoula, Mont.

While there is widespread agreement that the story is a good one, however, there is disagreement on the next chapter.

The Fish and Wildlife Service, saying that the mission to bring the bear back has been accomplished, will propose removing the bear from the list of threatened species this fall and, after a comment period, make a final decision in 2006. Delisting has happened for only about 15 species out of the 1,830 on the imperiled list.

But opponents of delisting say the bear is still endangered, primarily because of threats to critical food sources.

Both sides say the science is on their side.

While the federal government says safeguards are in place to reinstate federal protections if the bear population falls, critics are beyond skeptical, many saying they do not trust the Bush administration on conservation issues.

"Quite frankly, they are lying through their teeth about relisting the bear," said Craig Pease, a population biologist who teaches science at the Vermont Law School and has studied the Yellowstone population.

Louisa Willcox, who advocates for bears with the Natural Resources Defense Council in Livingston, Mont., said the administration has been hostile to the Endangered Species Act. "How can we be sure they'll rush in and list the bear if something happens?" Ms. Willcox said.
Whether to recognize the Yellowstone bears as a recovered population is not just an abstract scientific debate. Grizzlies, which occasionally prey on people, are moving out of the park's mountain wilderness and federal forest refuges and into areas with growing human populations. Removing protections would allow the bears to be hunted.

Since the late 1960's, there have been 17 fatalities involving bears and many more attacks in Yellowstone and Glacier National Park, home to the only other large population of the bears in the lower 48 states. In mid-September an elk hunter was attacked and wounded by a grizzly in the wilderness near Cody, Wyo.

"As bear numbers increase they are getting into places they haven't been seen in 50 or 100 years," Dr. Servheen said.

One place where the bears are showing up is at the two-room Valley School, on the South Fork of the Shoshone River southeast of Yellowstone. Recently, a grizzly bear charged a couple of fishermen and followed them to their vehicle near the school, then scared a fencing crew into their truck.

Audra Morrow, the teacher for the four students at Valley School, recalls cooking dinner in her log cabin next to the school when she looked out her kitchen window and saw a grizzly sow with two cubs headed her direction. "I was face to face with Momma," Ms. Morrow said. "I was cooking a veggie burger. I'm convinced that's why she left." She now keeps a loaded shotgun and cans of pepper spray within reach, and local parents erected a fence around the school's playground.

While people who live along the South Fork of the Shoshone are used to a wild way of life, many say the bear population is too big and support removing the bears' protection. Ms. Willcox believes hunting will not solve the problem. "It's the nature of that ground," she says. "Bears move through there. If you remove a bear another bear will replace it."

Along with Old Faithful, bears were once the heart of a visit to Yellowstone Park. Both black bears and grizzly bears were allowed to wander the roads and to beg for handouts or be watched by delighted tourists as they scavenged in dumps. In 1967, two backpackers were attacked and killed by grizzly bears in separate incidents on the same night in Glacier National Park.

Biologists believed the bears attacked because they had lost their fear of humans, and officials in both parks ended the "Yogi Bear period," forcing bears to return to an all-wild diet. Bears who pursued human food were shot, and from 1969 until 1971 more than 220 grizzlies were killed in Yellowstone. By the early 1970's, the number of bears had plummeted to fewer than 200.

In the 1980's biologists began an aggressive campaign to bring the bear back. Helped by environmental groups, rewards were offered for poachers, sheep were moved out of bear country, garbage cans were replaced with bearproof versions and campers were given rules on keeping food away from bears.

The grizzly bear population is the healthiest it has been in 30 years, and biologists say it is growing 4 percent to 7 percent a year.

"Does that mean you turn your back and walk away?" said Chuck Schwartz, who personally supports delisting and heads the Interagency Grizzly Bear Study Team in Bozeman, a collection of biologists and other scientists from state and federal agencies who oversee greater Yellowstone. "Absolutely not. It's an animal that requires a high degree of vigilance."

Critics say that in the push to delist, federal agencies have painted an overly rosy picture and that the numbers are suspect. Dr. Pease of the Vermont Law School thinks the reproductive rate is much less than what is claimed. But, he says, the interagency team has refused to release some of its research for other scientists to analyze. "There's every reason to mistrust them," he said.

The plan designates a 9,200-square-mile primary conservation area, more than a third of which is Yellowstone. The conservation area contains 90 percent of the bear population and would continue many of the same restrictions on livestock grazing, roads and other development that are currently in place. "The average bear won't see any difference" after delisting, Dr. Servheen said.

If bear numbers decline below a certain level or other threats emerge, Dr. Servheen said, there are plans to relist the bear in as little as two weeks.

The sooner bears are delisted, said Marcos Gonzalez, a ranch foreman at the Brown Thomas Meadows Ranch near the Valley School, the better. Mr. Gonzalez is worried about bears near the school that his 7-year-old daughter, Alejandra, attends. "You used to see them once in a while," he said. "Now it's everywhere, all the time."