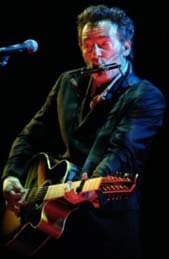 Big, big, big -- everything's just gotten too big. Years of arena rock and umpteen Lollapa-imitators, and aren't we just a little tired of the beer lines and the tent cities and the sight of our favorite performers way down there? (And here comes another Rolling Stones stadium swindle this summer. Yeesh.)

These days more artists -- and bigger names -- are launching theater tours and trying to sneak into cozier venues. Because, after all, music is not a mass experience. It's personal, probably spiritual, and it reaches people purely subjectively. We humans just happen to be wired with the same basic blueprints and tend to collect in crowds, digging the same things.

That, in a rather roundabout way, is the virtue of the Second Bruce Springsteen. We know that the First Springsteen, with his increasingly superfluous E Street Band, can rock those arenas and stadiums and fill every cubic inch of them with gut-wrenching, bone-crushing, sometimes even intelligent American rock 'n' roll. But the Second Springsteen exists to bring it all home -- as literally as possible. And, judging by Wednesday's 2-1/2-hour show at the Rosemont Theatre, this is the side of himself Springsteen is most comfortable with, or at least most passionate about.
The music that inspired these performances came from small spaces -- back porches, lonely rooms and, of course, cars. On albums or with the band, these songs are awesome; stripped down to one man, one guitar -- they're awe-inspiring. It's like telling ghost stories: A horror movie can scare the bejesus out of you, but a creepy legend told around a campfire probably keeps you awake longer.

Springsteen certainly knows a thing or two about ghosts. His Wednesday night show was haunted by them. His falsetto coos and howls filled the refrains and spaces between stanzas with paranormal chills. His songs of death came alive (the "sallow moon's glow" of "Silver Palomino," the starlight on the "Matamoros Banks" -- they would have been completely eclipsed in a larger venue). The wailing banshee that possessed him in "Reason to Believe" -- stomping out the funeral-march rhythm on the theater floor, huffing and even singing indecipherably through his harmonica like Darth Evader -- is clearly still wandering Highway 31 in "Nebraska."

On paper, little of this is comforting. These are mostly songs of loss and pain and the occasional direct recognition of larger social ills. (He acknowledged from the stage that he doesn't write many love songs.) In person -- one man to one fan -- it comes across as the kindness of a stranger, the comfort of company you don't get with 18,000 of your closest friends.

It's all invigorating despite the perils of such intimacy. Bruce at the piano can be touching as well as troublesome (or clunky, as when he, for whatever reason, started "Paradise" on an electric piano and moved over to the acoustic piano mid-song). Bruce plucking out "I'm on Fire" on a six-string banjo is cool, but his whistling the song's melody in a separate key is not. Small venue or no, he's more on fire with a guitar and a song that stirs him. He evokes Dylan in slower, intricate tales such as "If I Should Fall Behind" and "The Hitter," and he's an exciting rocker when he plays "Long Time Comin'," "Maria's Bed" and "The Rising," doing that First Springsteen thing -- squatting, strumming hard, biting his lower lip as he looks over his shoulder. You can take the boy outta the stadium ...

For a second encore, Springsteen sat down at the harmonium, where he had started the show with "My Beautiful Reward," and began a new song called "Dream." It's a hymn full of cliches -- "Keep on dreamin'/Keep the light burning/I just want to see you smile" -- that repeat and repeat, crescendoing into a religious ecstasy. A few lighters came on, but it went beyond that: Some people in the audience actually held up their hands, as if witnessing at a Baptist church. Springsteen, now playing the revival preacher, got his riffs into a computer loop and was able to walk away from the keyboard, grabbing the microphone and repeating the lines with his eyes closed, quietly, intimately: "Keep on dreamin'" ... "light burning" ... "see you smile" ...
Posted by jtf at 8:09 AM