To him, the testimony of the five past and present major-leaguers was so thigh-slapping wacky that even abuser-turned-author Jose Canseco came off as the most credible witness, outside of the medical experts. 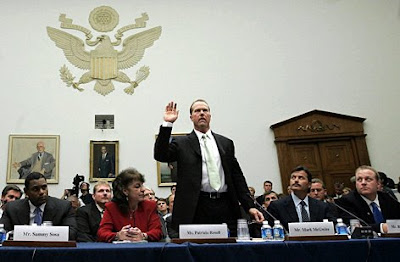 "The other baseball players, when they were doing their routines, it seemed like they were doing a 'Saturday Night Live' skit," said Chuck Yesalis, a Penn State professor, researcher and author in the field of performance-enhancing drugs. Boston's "Curt Schilling reminded me of Michael Corleone's uncle appearing before the Senate in 'Godfather 2.' When asked about the Cosa Nostra ... 'I never heard of it. I'm in the olive oil business.'

"I was laughing out loud, it was so funny.

Yesalis testified last week before a House Energy and Commerce Committee in a warm-up to the 11 1/2-hour session Thursday with the House Committee on Government Reform, and it "was far less comical than this hearing."

Some of the commentary was so absurd to Yesalis and his research findings of the past 27 years, that a friend and former steroid user kept telephoning his State College home during the breaks in testimony to chuckle over it: former Steelers lineman Steve Courson.

In their view, any discussion of performance-enhancing drugs must involve embracing two premises that this hearing proved no one inside Room 2154 of the Rayburn Building would accept:

All drug-testing is flawed to some degree.

You have to admit to a steroid problem before you can attempt to beat it -- something professional sports owners might not do, considering bigger and better athletes make money for the baseball, football or other teams that employ them.

Moreover, Yesalis said, speaking seriously of the gravity of any such discussion, "Far beyond drugs and sports, this is a major social issue here. Our kids are doing these drugs."

Medical experts and politicians alike quoted figures that showed about 500,000 American high school students have used performance-enhancing drugs at least once. Yesalis is the researcher who struck upon that figure in 1988, though he said it probably has doubled since.

He credited President Bush with igniting political interest in the subject, with the President mentioning it in his State of the Union address and with his administration placing a federal spotlight on the BALCO investigation in California.

But discussion has to be meaningful in order to make any advances, and what Yesalis heard from the televised hearings didn't satisfy that requirement.

For one, Schilling had been outspoken previously about the rampant use of steroids in baseball. In front of the TV cameras and many of the 39-member committee Thursday, he stated that he knew of only five to 10 teammates who used them over the past decade and a half. Meanwhile, Baltimore's Sammy Sosa and Rafael Palmeiro denied using steroids, and retired slugger Mark McGwire declined to speak on the matter despite admitting to using a steroid compound, androstenedione, then permissible in baseball while breaking the home run record in 1998.

"As Canseco said, we need to agree this is a problem," Yesalis said. "If you listen to these other guys, he was the only one to take steroids. That was laugh-out-loud funny."

He found himself agreeing with Canseco on the notion that self-correction won't happen under commissioner Bud Selig and Major League Baseball Players Association boss Donald Fehr.

"I don't think that's going to happen," Yesalis said. "It bothers me that government is sticking its nose into private business. It will argue, appropriately so, about the health and welfare of children."

And it also has baseball's antitrust powers in its hands, a tool that many members of Congress threatened to invoke if the game didn't clean up its perceived steroid problem and strengthen its new drug policy.

He added he could make the argument that performance-enhancing drugs also helped to enhance bottom lines, turning owners' franchises into billion-dollar assets. He said as much in his March 10 introductory remarks on Capitol Hill.

Yesalis also maintains that drug-testing, especially the Olympic form that continuously was called "the gold standard" in these hearings, has loopholes through which he could drive an Abrams tank "and not scrape the body armor." He testified he could take a team of steroid cheats and pass the standard drug test every day, what with masking agents and expertise at the disposal of wealthy and insulated elite athletes. Such performance-enhancing drugs as human growth hormone, insulin and BALCO's infamous "cream" and "clear" still avoid detection in testing.

"There are a ton of people, including Congress in that room, who believe drug-testing will solve the issue," he said. "That's what causes my hair to hurt more than anything else."

Drug-testing is beneficial at the professional level as a public-relations tool and a way to ferret out the less-schooled cheats, he added. Major League Baseball would be wise to adopt the committee's suggestions, though.

"These guys are ticked off," Yesalis said. "You want to see tough guys? Mess with these national politicians."