Hi Robert! Someone forwarded me a copy of the email you recently sent to a number of animal rights nuts, I mean, activists. In your letter, you called for my investigation by the ATF for “stockpiling weapons.” You really should watch what you say on these liberal mailing lists. Just for fun, conservatives sometimes join the lists using pseudonyms. And, sometimes, they even forward the emails to me.

But, Robert, I have no intention of berating you for what you said. In fact, I have more concern for your feelings than for those of a whitetail deer or a wild boar. I value human life more than animal life, even if the human is a liberal who wants to take my guns. 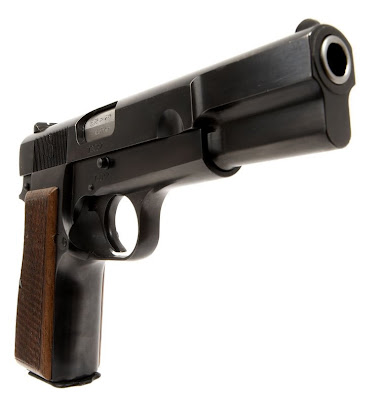 I also want to thank you for reminding me why I am a gun owner. It doesn’t bother me that liberal animal rights activists like yourself prefer not to own guns. But it does bother me that you want to have my guns taken away by government agents wielding guns. When the assumption that rights apply exclusively to governments and not to citizens goes unchallenged, tyranny is the inevitable consequence.

So, today, I plan to fight your strategy to disarm me by making a few additional gun purchases. The guns I plan to purchase have been selected for two reasons. First, I do not actually need any of them. Second, the guns are all pretty. Here are my top selections:

The Remington 597 chambered in .17 HRM. Last summer on the way back from a speaking engagement in Washington, DC, I found a gun store called Gander Mountain in Fredericksburg, Virginia. While there, I picked up a Remington 597 stainless .22, with a brown laminated stock. Nice gun. The .17 version with a blue barrel and a gray laminated stock is even nicer. It is a great gun for small varmints. It is deadly accurate beyond 100 yards, even with a low-powered scope.

The 9mm Browning. This gun fits me like a glove. With a 4 ¾” barrel it is a very accurate sidearm. It is good for the woods or for personal protection. The stainless tactical version of this gun is both good-looking and weather resistant.

The Kimber .45 ACP. My last article offering gun recommendations lacked any mention of the 45 ACP. Many owners of 1911-style 45s were upset with the omission. I have decided to remedy the problem with a custom Kimber. This gun is so nice I will be tempted to keep it in my gun safe without ever firing a shot. On second thought, I don’t see that happening.

The Colt Python .357 Magnum. Dirty Harry first gave me the inspiration to own one of these beauties. After seeing one up close at Gander Mountain, complete with stainless frame and walnut grips, I was immediately sold.

The Marlin 45-70 “Guide Gun.” My recent decision to start boar hunting in the brush necessitates another lever action rifle by Marlin. I actually decided to get this after they removed the porting from the 18.5” barrel. It was an unnecessary feature creating a lot of extra noise. This gun will be good for elk in the brush, too.

The Browning White Medallion .300 Winchester Magnum. I was very pleased with my 30.06 Medallion, so I decided to buy the stainless version. My big-game hunting readers have been screaming for me to move up to a .300 Win Mag. This gem is the obvious choice.

Well, Robert, seven new additions to the gun safe should be enough for now. I have also decided to mount the head of my latest kill in my office at the university. Below the deer, which sports 29-inch main beams, I intend to put a plaque thanking “my deer friends at PETA.”

I hope the psychologists in my building will not object to the dead deer in my office. After all, they have live rats in their offices. In fact, some of those rats have taught the psychologists to give them pellets whenever they press a lever. Since the rats are smarter than the professors, I promise not to hunt them. Finally, it appears we agree on something, Robert.

Mike S. Adams will speak at Wabash College on January 27th. He will buy a new gun on January 28th.

Welcome to the Ivory Tower of Babel: Confessions of a Conservative College Professor

David Limbaugh says Mike Adams's first book "is a brilliant, but disturbing expose of life in postmodern academia today. No one better reveals the fraud pervading America's college campuses under the seductive euphemisms of political correctness, multiculturalism, and diversity-destructive forces that have led to sheer chaos. Adams is a modern-day Jeremiah whose warnings we cannot afford to ignore."
(read Townhall's review)
Order it now and save 30% off the cover price!