With bullpen, Joe Girardi manages to give one away for New York Yankees in Game 3 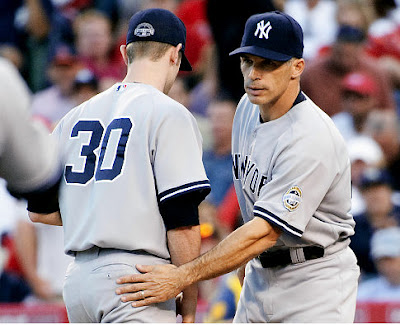 ANAHEIM - Here came Joe Girardi to get David Robertson in the bottom of the 11th at Angel Stadium, the Angels fighting to keep a baseball season alive, no real prospects for them in the 11th, two outs and nobody on. We have talked a lot about the bad plays the Angels have made in this series, and they made two bad plays on the bases yesterday on a day when they were really playing for their season. Now here came Joe Girardi to do some bad managing, at a bad time, on a day when his team could have gone up three games to none on the Angels.

Everything had already happened in this game, the way everything had happened Saturday night and into Sunday morning in Game 2. The Yankees had gone ahead 3-0 on three home runs, come back to tie the game at 4-4 on Jorge Posada's home run in the eighth, nearly lost the game in the 10th.

Oh yeah, the Angels seemed to have the game in the bottom of the 10th after the kind of error from Mo Rivera on a bunt that you couldn't remember seeing in a big spot since Game 7 against the Diamondbacks in a World Series eight years ago. First and third after that, nobody out. Then bases loaded and one out. Somehow Rivera, being Rivera, got out of it.

Again, you thought the Angels were ready to go. One more time in this series the Angels had to be wondering what they had to do to get a game off the Yankees.

"We could have quit right there," Torii Hunter said, "but we didn't."

Played into the 11th, two outs and nobody on, Robertson having gotten a ground ball and a harmless fly to left. Howie Kendrick coming up. He had faced Robertson twice and couldn't even remember those two times when it was over yesterday. "Don't recall," Kendrick said. "Might have walked." Two at-bats, lifetime, one hit, one strikeout. But Girardi decided he liked Alfredo Aceves' stuff better than Robertson's against Kendrick, and maybe Jeff Mathis after that. You know why? Because managers always have their reasons when they're over-managing.

"It's just a different kind of stuff against those hitters," Girardi said. "And we have all the matchups, and all the scouting reports, and we felt, you know, it was a better match for us."

They always have their reasons. They have their reports and a lot of times they work like a charm. Or it doesn't matter how they work because of the way the Yankees hit and come back.
Monday the matchup reports did as much good for the Yankees as Aceves did.

Howie Kendrick - who often looks like the best hitter in the world against the Yankees no matter who is pitching - took Aceves up the middle. Then Mathis, Angels catcher, a guy who had started the Angels' big chance in the bottom of the 10th with a hard double to left-center, was up there against Aceves.

Mathis hit one harder in the 11th than he had in the 10th. Jeff Mathis was having the game of his life and so maybe it didn't matter who he was facing yesterday. "The postseason is about one thing," he would say in front of his locker later. "One big hit."

This one came off his bat, high and deep to left-center, splitting Melky Cabrera and Jerry Hairston. It looked like it might go out. Didn't. Didn't matter. Because with two outs Kendrick was running all the way, all the way home with the run that made it 5-4 for his team and started the fireworks at Angel Stadium. Finally the Angels got a game against the Yankees, the hard way.

"Why'd they change pitchers there?" one of the Angels said. "Ask them."

A half-hour after the game, Robertson was standing at the bottom of some stairs near the Yankees clubhouse as Hal Steinbrenner and Randy Levine, the team president, slowly walked past him. Robertson watched them pass, smiled and said in a quiet voice, "Another game tomorrow."

It didn't matter in the end that Derek Jeter led this one off with a home run, that Alex Rodriguez hit his fourth homer of the postseason, that Johnny Damon followed with one of his own and the Yankees were up 3-0 in Game 3. Or that Bobby Abreu looked like an idiot on the bases leading off the eighth with what should have been a triple. But Abreu stopped after a huge turn around second, scrambled back, Jeter took the cut-off throw, threw to Mark Teixeira, over covering second because he's never in the wrong place on the field.

It didn't matter that Hunter got thrown out at second after nearly getting picked off first in the fourth, or that Rivera somehow got out of the 10th or that the Angels looked as if they'd blown Game 3 the way they blew Game 2 at the Stadium.

They didn't, even after the way the 10th ended, even with two outs, nobody on in the 11th. Stayed in there in the 11th even as the kid - Robertson - was breezing along. A kid who wants the ball. Had it Monday. Until the Yankee manager took it away from him. One move too many.
One game for the Angels now. And Howie Kendrick is 1-for-1 lifetime against Aceves now.
Posted by jtf at 1:00 PM