An exclusive report on the recent arrest of American Tarek Mehanna and the author's online monitoring of his jihadist activities.

By all accounts, Tarek Mehanna seems an unlikely aspiring terrorist. He grew up in the Boston suburb of Sudbury, went to private schools, and, following in his father’s footsteps, earned a Ph.D. in pharmacology. Given all the advantages of wealth, education, and freedom afforded in America, Tarek Mehanna had a bright future.

But a federal complaint against Mehanna describes aspirations of killing former President George W. Bush, mowing down shoppers with automatic weapons at a mall, and failed efforts at joining the ranks of terrorists abroad.

A former religious teacher described him as a “fun-loving, ordinary, typical American kid.” Mehanna would bring comics to class and was a big fan of Superman. A friend laughed at the notion that Mehanna could ever be a terrorist. At his court appearance on Wednesday, Mehanna’s father claimed that the charges against his son were “a show.” 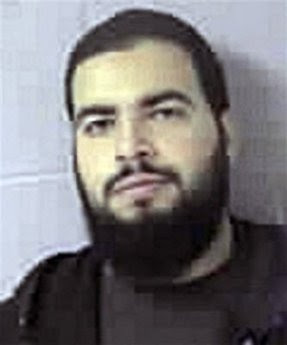 This booking photo released by the Sudbury, Massachusetts Police Department shows Tarek Mehanna. Officials Wednesday charged Mehanna with plotting to attack US and allied forces in Iraq and strike at a shopping mall as he sought to wage "jihad" on American interests.
(AFP/SPD-HO)

An online acquaintance of Mehanna argued with me, saying that the charges had no merit. Mehanna, he claimed, was a “moderate” Muslim who had always argued against the killing of innocents. His arrest, his acquaintance told me, was evidence that Muslims in America are guilty until proven innocent — inferring that Mehanna’s arrest was just another in a larger, anti-Muslim conspiracy.

The shock of Mehanna’s friends and family is typical. Those acquainted with terrorists often insist that the accused was shy, polite, helpful, or empathetic. It juxtaposes with our natural inclination to want to believe that people aspiring to evil deeds should somehow manifest the true nature of their characters in their day-to-day behavior. That such people aren’t typically raving lunatics, overtly sociopathic, or belligerent fanatics doesn’t dawn on most. It makes us feel safer to assume that a potential terrorist will give us some sort of warning sign.

But in Mehanna’s case there were warning signs. If his friends’ shock is real, then Tarek Mehanna was living a compartmentalized and double life. For the Tarek Mehanna I knew online was not the “moderate” that his apologists portray him as. He was a fanatical Islamist, devoted to the same ideas as al-Qaeda. He spent countless hours translating Arabic texts into English in order to inspire others to become violent jihadists.

Mehanna went by the handle “Abu Sayaba” online. In addition to frequently commenting at radical forums and online discussion groups, “Abu Sayaba” also ran his own blog. His Iskandari blog posted translations of Arabic texts. Typical of the writings he posted were calls for the establishment of an Islamic state and Islamic law. He also encouraged violent jihad as a means of attaining these two goals.

Tarek Mehanna may seem to have been an unlikely terrorist candidate to some, but given his online support for violent jihad revealed through his “Abu Sayaba” persona, should it really come as a surprise that he would aspire to become a violent jihadist himself?

Online, Mehanna reveals that the arrest of Aafia Siddiqui — a woman married to Khalid Sheik Mohammed’s nephew — caused him so much anger that he felt obligated to make the trip to New York City to attend one of her hearings.

Ironically, Mehanna went to her hearing because he claimed to believe that she was innocent — a victim of the perceived vast conspiracy against Muslims. She must be innocent, he claimed, because those who knew her described her as a “very small, quiet, polite, and shy woman.”

If Mehanna’s online activities as “Abu Sayaba” were unknown to friends and family — and therefore an excuse for their ignorance about his extremism — then unless he was living a very compartmentalized life, it is difficult to see how his real-world activities wouldn’t raise alarms.

Among the unsavory characters in Mehanna’s clique is another homegrown jihad aspirant, Daniel Maldonado. Maldonado, who changed his name to “Al-Jughaifi” upon his conversion to Islam, is serving a 10-year sentence in a federal penitentiary. Like Mehanna, Maldonado also had an active online life. He worked at an Islamic forum giving advice to young people. Some of them followed that advice and are now serving prison sentences here in the U.S. and Canada.

It was this connection to Maldonado that first brought Mehanna to the attention of federal agents. Maldonado traveled to Somalia, where he received weapons training from al-Qaeda operatives. While there, he called his friend Mehanna and encouraged him to come and join the cause.

When questioned by the FBI about the call, Mehanna denied knowing his friend was in Somalia and claimed that he thought he was in Egypt. It was this lie to the FBI that led to his first arrest last year. It now appears that the underlying reason for the arrest was to prevent Mehanna from leaving the country as he was about to depart for Saudi Arabia.

The details in this week’s federal complaint against Mehanna reveal why authorities would use the rather minor charge of lying to the FBI to keep him from leaving. In 2004, Mehanna and an accomplice traveled to Yemen to “find a terrorist training camp to learn how to conduct, and to subsequently engage in, jihad,” with the hope that they would fight against their own countrymen: U.S. soldiers in Iraq. Ultimately, they were unsuccessful. They found the training camps they were looking for closed and their intended contacts either away on a religious pilgrimage or already in jail.

Mehanna’s accomplice, named as Ahmad Abousamra, continued to seek the life of a jihadist. In Iraq, insurgents turned him down because they didn’t trust him as an American. In Pakistan, two different jihadist groups turned him down because he was an Arab. After being questioned about these trips by federal authorities, Abousamra fled the U.S.; he is now believed to be living in Syria.

In addition to Daniel Maldonado and Ahmad Abousamra, the federal complaint also claims that at least two other unnamed individuals plotted with Mehanna. The group frequently sat around discussing various acts of violence and justifications for killing civilians. They also watched propaganda videos. Many of these discussions might be chalked up to the world of fantasy, but on at least one occasion a group representative was sent to visit Maldonado in an attempt to acquire automatic weapons.

So who is the real Tarek Mehanna? Is he the typical American kid described by some friends and family as incapable of being a terrorist? Or is he the supporter of violent jihad as seen in his publicly available online writings and described in the federal complaint against him?

Those who believe that there must be some mutual exclusivity between acting in a typically American fashion and supporting terrorism have built a glass house of perception on which they hang their hopes of safety at their own peril. Mehanna is both typically American and a supporter of terror.

That is to say, there is no inherent contradiction in aspiring terrorists being outwardly typical of the larger community. I recall photos of a young Adam Gadahn wearing an L.A. Dodgers baseball cap. Gadahn is now a member of al-Qaeda and the only U.S. citizen indicted for treason.

Nor is there any temperamental requirement for terrorism. In my experience, people watching videos of Osama bin Laden for the first time are often confused by the fact that he is so soft-spoken. In their minds all nihilistic maniacs ought to give speeches like a frenzied Hitler at a Nuremberg rally.

Muslims are especially at peril of falling into this pattern of thought. While homegrown terrorism is not exclusively limited to the Muslim community — the KKK being our nation’s oldest terrorist organization, for example — it is a fact that the vast majority of terrorists today are Muslims inspired by the ideology of jihad. Denying that someone could possibly be involved in terrorism because “he is so nice” or “seems so normal” can lead to an atmosphere of denial and paranoia. Since it is assumed that person after person charged is innocent because of a lack of abnormal behavior, it is often concluded that many Muslims are being arrested due to racism, religious bigotry, or an even larger conspiracy.

The signs of terrorism are there, but you will not necessarily find them by searching for outwardly antisocial behavior. The common denominator to most would-be terrorists is a devotion to the jihad ideology. And ideologies are hard to detect. There are few, if any, T-shirts in the U.S. celebrating Osama bin Laden and no reports of a homegrown terrorist wearing one.

Dr. Shackleford is an educator and runs the Jawa Report.
Posted by jtf at 6:51 AM