No stopping Alex in his comfort zone

ANAHEIM, Calif. – There it was, another missile that was as good as gone the moment it left Alex Rodriguez’s bat. Listen closely enough and you hear the difference in those beasts – they’re not just hit, they’ve had damage inflicted upon them. They don’t just leave the ballpark, they seem to pick up speed on the way to Mars. 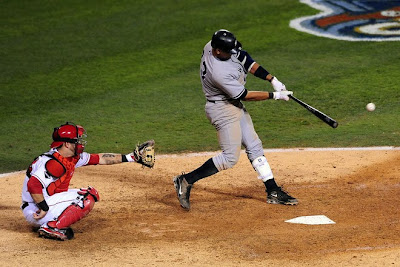 ANAHEIM, CA - OCTOBER 20: Alex Rodriguez(notes) #13 of the New York Yankees hits a double to left field during the ninth inning in Game Four of the ALCS against the Los Angeles Angels of Anaheim during the 2009 MLB Playoffs at Angel Stadium on October 20, 2009 in Anaheim, California. (Photo by Jacob de Golish/Getty Images)

None of this is supposed to be possible, but Rodriguez is too busy rewriting the record books to care. The slugger, who was 3-for-4 with a home run and two RBI in the Yankees’ 10-1 rout of the Angels, has now driven in a run in eight straight postseason games, tying him with Lou Gehrig for the most in Yankee history.

Crazy, isn’t it, that a little more than six months ago A-Rod was asking the world to forgive him for crossing the line on steroids. His reputation was shot, his place in Cooperstown was suddenly in doubt and then, as if his life couldn’t have been any more miserable, his hip blew out.

Rodriguez has since said the time he spent in Colorado rehabbing was the darkest of his career. He had doubts about returning to the game, or if he did, whether he’d ever be the same graceful athlete that he’d been in his 20s.

About to turn 34, Rodriguez had run smack into the wall of baseball middle age and there was no guarantee he’d win this war with time. A-Rod had admitted to cheating during his MVP years in Texas, so it was anyone’s guess whether he could flourish without the syringe.

The run-producing surge this October has been hailed by most as proof that A-Rod has found himself – finally at peace in a good relationship with Kate Hudson, finally free of the hangers-on and sycophants who’d turned him into a Hollywood diva.

Rodriguez has stopped hungering for bold-face mentions on Page Six. The third baseman now considers himself a Yankee instead of a celebrity who happens to wear pinstripes. His loyalty is to his teammates, or as one person in the organization said, “Alex finally stopped acting like he was always ‘on.’ He’s not on stage anymore.”

Rodriguez has discovered there’s no upside to giving extended interviews, so he’s stopped doing one-on-one interviews. He doesn’t make small talk with reporters anymore. Instead, A-Rod has limited his exposure to brief postgame sound bites, making sure to live within the boundaries of safe, Disney-rated quotes.

But what about the power, is what the doubters want to know, How can a confessed cheater ever be trusted again? Fair point. There are enough people who are convinced Rodriguez is still on something – anything – that’s turned October into his calisthenics.

Perhaps A-Rod never fully will escape the steady drizzle of suspicion. It’ll continue to soak him for years, maybe the rest of his career. It’s impossible to see his home runs tower into the air – seemingly higher and farther than anyone else’s – and not wonder what fuels the engine.

But Rodriguez has also had enough embarrassment for a lifetime. His need for steroids was rooted in his narcissism and his vanity, and the allegations in Selena Roberts’ book were like a wake-up call to him. So says one friend who believes “the all-about-Alex fantasy world Alex was living in is over.”

So is he clean? The Yankees believe it. So does Major League Baseball, which tests Rodriguez on a random basis. If A-Rod is using growth hormone, which is thus far undetectable by baseball’s testing regimen, he’s either stupid or a sociopath. Somehow, we suspect neither is true.

Rodriguez is carrying the Yankees because he was good enough to do so in the first place. All he needed were three essential components: health, self-confidence and his timing, all of which have been factors this month. 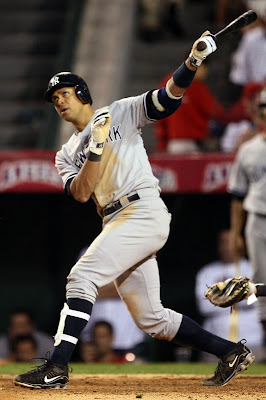 ANAHEIM, CA - OCTOBER 20: Alex Rodriguez(notes) #13 of the New York Yankees hits a two run home run during the fifth inning in Game Four of the ALCS against the Los Angeles Angels of Anaheim during the 2009 MLB Playoffs at Angel Stadium on October 20, 2009 in Anaheim, California. (Photo by Stephen Dunn/Getty Images)

He blasted HR No.5 of this postseason in the fifth inning Tuesday night, a signature shot off reliever Jason Bulger. This time, it was Mike Scioscia, not Joe Girardi, who got burned moving the chess pieces, as the Angels’ skipper had pulled starter Scott Kazmir for the sole purpose of containing Rodriguez.

Bulger, a harder thrower than Kazmir, would have a better chance of winning the at-bat, especially since he’s right-handed. But Rodriguez calmly hit a two-run HR that gave the Yankees a commanding five-run lead, which would ultimately turn into a nine-run gap that all but ended the ALCS.

There was no preening or gloating as the ball cleared the wall. There was no Manny Ramirez moment of self-glorification. Instead, Rodriguez put his head down and started a fast, respectful trot around the bases, blowing a bubble as he rounded towards second.

“I’m in a good place, I’ve felt that way all year,” is what he says now, getting no argument or rolled eyes from anyone in the room. Even Reggie Jackson, who used to privately question Rodriguez’ courage, says, “You’re talking about a different player.”

Rodriguez even takes care of the smallest details, like covering home plate in the sixth inning when Jorge Posada thought Juan Rivera’s double play was the third out. The catcher jogged towards the dugout, leaving the plate uncovered with Torii Hunter on third.

A-Rod rushed to protect the gaping hole in the Yankees’ defense – a reflex that told you his head was in the game, not the clouds, and as is so often the case these days, not into himself, either.
Posted by jtf at 3:19 PM