A Stimulus for Hill Democrats' Fortunes?

By George F. Will
The Washington Post
http://www.washingtonpost.com/
Sunday, October 18, 2009 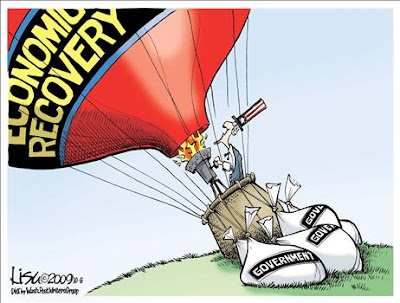 As Harvard's president, Larry Summers, economist and former Treasury secretary, was a lion in a den of Daniels. The faculty Daniels, their tender feelings hurt by his occasional testiness, cowered together and declared him a meanie. Facing a faculty vote of no confidence, he resigned.

Now he is Barack Obama's principal economic adviser. So, weary of John Boehner, leader of House Republicans, dwelling on rising unemployment, Summers sent him a letter. In it he said, as Obama and his minions so consistently do, something that may be the text of this year's White House Christmas card: At least we are not George Bush, so there.

Summers said Obama "is committed to not repeating the fiscal mistakes of the last eight years." The letter, like its author, is trenchant and intelligent. He notes that job creation was much better during the eight Clinton years -- an average of 225,000 per month -- than between November 2001, the end of the last recession, and December 2007, the beginning of this one, when the monthly average was just 94,000. And Summers tartly reminds Boehner that in 2003 the Republican-controlled Congress passed a prescription drug entitlement "that was not offset by either spending cuts or tax increases" and that in its first decade will cost more than $1 trillion, including interest on the necessary borrowing.

But speaking of unfunded medical entitlements: The furrowed Washington brows that currently express faux puzzlement about how the health-care entitlement -- aka "reform" -- will be paid for are theatrical. There is no mystery. The new entitlement will be paid for, to a significant extent, the way much of government is paid for -- by borrowing from China.

Republicans are operatic when they pretend to take seriously, in order to wax indignant about, the Democrats' professed plan to partially pay for Sen. Max Baucus's version of reform by cutting at least $400 billion from Medicare. Supporters of the Baucus bill are guilty of many things but not, regarding such cuts, of sincerity. Congress regularly vows to make Medicare cuts, and as regularly defers them.

Today, Washington routinely speaks of trillions, as in: This year's trillion-dollar deficit. And the $9 trillion in projected deficits over 10 years. And the upwards of $1.8 trillion that Baucus's "$829 billion plan" would actually cost in the first 10 years (2014-23) in which its provisions would be fully operational. But the number from which Washington flinches is precisely 999,999,999,997 less than a trillion. It is: 3.

Many Democrats believe that rising unemployment means the nation needs a "second" stimulus -- but one they could call something other than a stimulus because it would be the third. The first was passed in February 2008, two months after the recession began. Its $168 billion tax rebate failed to stimulate because overleveraged Americans perversely saved much of it.

Admitting that the first stimulus existed would complicate the task of justifying a third one, given that the second one -- the $787 billion extravaganza that galloped through Congress in February -- has not been the success its advocates said it would be. The administration predicted that if Stimulus II were passed, unemployment would not go above 8.5 percent. On CNN on Feb. 9, Summers was asked how soon Americans would "feel results, the creation of jobs." Summers answered, "You'll see the effects begin almost immediately," starting with "layoffs that otherwise would have happened." Summers's formulation resembled various presidential statements, such as his goal "to create or save" 600,000 jobs in 100 days and up to 4 million jobs by 2010, and the statement that as of June, Stimulus II had "created and saved" 150,000 jobs.

Assertions that things would be much worse if Stimulus II had not been passed cannot be refuted because they are based on bald claims about numbers of jobs "saved." Because those cannot be quantified, the assertions are unfalsifiable and analytically unhelpful. They are, perhaps, helpful to the administration by blurring the awkward fact that since Stimulus II was passed, the unemployment rate has risen from 8.1 percent to 9.8 percent and probably soon will pass 10 percent.

georgewill@washpost.com
Posted by jtf at 9:26 AM