Global Warming And The Second Battle of Copenhagen 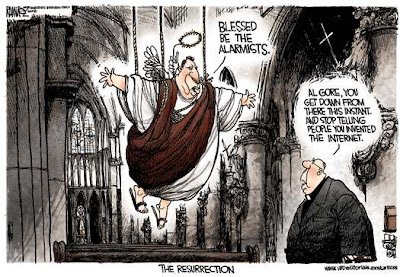 Before President Obama even landed at Andrews Air Force Base, returning from his mission to Copenhagen to win the 2016 Olympic Games, Chicago had been voted off the island.

Many shared the lamentation of Indiana Gov. Mitch Daniels, "What has become of America, when Chicago can't steal an election?"

A second and more serious battle of Copenhagen is shaping up, in mid-December, when a world conference gathers to impose limits on greenhouse gases to stop "global warming." Primary purpose: Rope in the Americans who refused to submit to the Kyoto Protocols that Al Gore brought home in the Clinton era.

The long campaign to bring the United States under another global regime -- the newest piece in the architecture of world government -- has been flagging since 2008. Then, it seemed a lock with the election of Obama and a veto-proof Democratic Senate.

Why has the campaign stalled? Because global warming has stalled. The hottest year of modern times, 1998, came and went a decade ago.

As BBC climate correspondent Paul Hudson writes: "For the last 11 years, we have not observed any increase in global temperatures. And our climate models did not forecast it, even though manmade carbon dioxide, the gas thought to be responsible for warming our planet, has continued to rise."
What this powerfully suggests is that what man does and does not do is far less responsible for climate change, if it is responsible at all, than other factors over which he has no control.

Consider. Though the emissions of carbon dioxide rose constantly throughout the 20th century -- with the industrialization of the West, Japan, Southeast Asia and, finally, China and India -- global temperatures have not risen steadily at all. They have fluctuated.

But if there is no crisis, why are we even going to Copenhagen? And if there is no causal connection between carbon dioxide and global warming, what is the true cause of climate change?

One solar scientist, Piers Corbyn, claims to have found a link between solar charged particles hitting the Earth and global warming and cooling.

Others, like professor Don Easterbrook of Western Washington University, contend that the oceans explain climate change. As they heat and cool cyclically, the Earth heats and cools. And where the oceans were cooling for 40 years before the 1990s, they have lately been heating up. Easterbrook says these cycles tend to last for 30 years.

As Hudson notes, there are scientists who claim they have taken all these factors into consideration and insist that the Earth, over the long haul, is warming. But Hudson cites Mojib Latif of the Intergovernmental Panel on Climate Change, who says we are in the first stage of a long-term cooling trend that will last another 10 to 20 years.

The anecdotal evidence almost daily contradicts Al Gore and the end-of-times environmentalists. Lately, there have been record-breaking cold spells in the Midwest and West. Snow came to Colorado this October, postponing a baseball playoff game. The hurricane season turned out to be among the mildest on record. Contrary to predictions, the polar bear population seems to be doing fine.

While the ice cap at the North Pole is receding, the Antarctic ice cap, which contains 90 percent of the world's ice, is expanding.

Moreover, receding ice in the Arctic is opening up a northwest passage from Europe to Asia. The Russians believe the immense mineral resources of the Arctic may soon be accessible. While we wring our hands, they are rushing to get them.

The mounting evidence that global warming has halted and man is not responsible for climate change has thrown the Kyoto II lobby into something of a panic. Barbara Boxer and John Kerry are re-branding the Senate cap-and-trade bill as a national security measure.

If, however, cap-and-trade, which the Congressional Budget Office says will be another blow to economic growth, can be stopped before the Copenhagen summit in December, the republic may have dodged another bullet. And the goal of the globalists -- an end to the independence and sovereignty of the United States, and the creation of a world government -- will have sustained yet another welcome postponement.

- Patrick J. Buchanan needs no introduction to VDARE.COM readers; his book State of Emergency: The Third World Invasion and Conquest of America, can be ordered from Amazon.com. His latest book is Churchill, Hitler, and "The Unnecessary War": How Britain Lost Its Empire and the West Lost the World, reviewed here by Paul Craig Roberts.
Posted by jtf at 10:35 AM