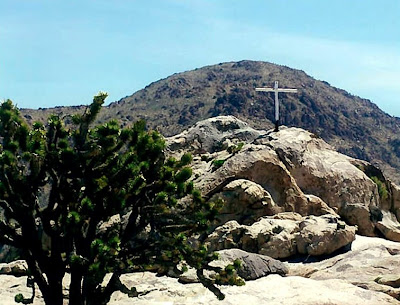 So, the ACLU is at it again. They are suing to take down a cross on a huge public swath of desert in Southern California. The cross is a memorial to Americans who died in war. It has been there for decades although now it's wrapped up in a box. As you might guess, the ACLU says the cross offends Jews and Moslems and atheists. The issue is before the Supreme Court as a First Amendment Freedom of Religion issue. To the ACLU this means "a right of the atheists to dominate everyone else" issue. And, of course, the Supreme Court makes whatever law it chooses to make so there is no controlling precedent except what the Court makes up. So, in that spirit, a few humble thoughts....

Here are a few reasons why the cross should stay:

The great majority, the overwhelming majority, of the Americans who have died to keep us free were and are Christians. Take a look at Arlington National Cemetery or the American graveyard at Normandy, France. What you see are almost all crosses or crosses on monuments. It is an insult to the memory of those people for some lawyers to take down the symbol of the faith they believed in as they fell. Are we going to take all of those crosses down and replace them with meaningless rectangles? Those crosses represent Christians who died to keep America free for us Jews and everyone else. Are we now going to thank them by taking down their crosses? That would be revolting. 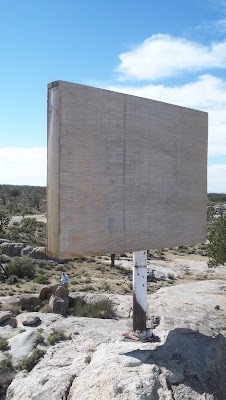 Anyway, if we head down this path, is there any stopping point short of state-ordered atheism? Will we bar chapels at military bases? Will we close the chapels at West Point and Annapolis and Colorado Springs? Will we fire all the military chaplains and replace them with peoples' commissars? Will we end prayers at Congress? Where in the history of this country is there any precedent for such an attack on religion?

Look, this is a nation founded on faith. The dominant faith is Christianity and I am happy it is. It is a generous, tolerant faith that has been incredibly good to every other faith and to atheists. Those of us who are not Christians might want to stop pushing Christians around. They don't deserve it. It won't be pretty if they are ever start pushing back. Not only that, I will tell you when I start to worry: when this country no longer is a Christian country. That will be bad times for everyone, and really, the end of America. The cross out there in the desert is not hurting anyone and it helps some. There is no reason to take it down except for pure trouble making and meanness of spirit.

Ben Stein is a writer, actor, economist, and lawyer living in Beverly Hills and Malibu. He writes "Ben Stein's Diary" for every issue of The American Spectator.
Posted by jtf at 4:25 PM