A cold war is "the key to understanding the Middle East in the 21st century." So argue Yigal Carmon and three of his colleagues at the Middle East Media and Research Institute (MEMRI) in a recent study, "An Escalating Regional Cold War."They have identified a major confrontation that the media has somehow missed – and which is the more important for Mahmoud Ahmadinejad's just having been re-designated as president of Iran. 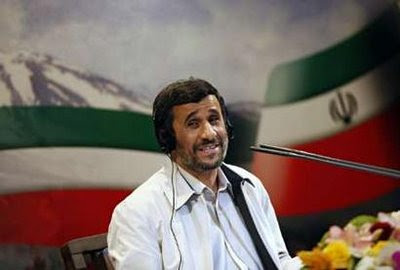 A cold war, according to the Merriam-Webster dictionary, is "a conflict over ideological differences carried on by methods short of sustained overt military action and usually without breaking off diplomatic relations." Note the three elements in this definition: ideological differences, no actual fighting, and not breaking off diplomatic relations.

The classic instance of a cold war, of course, involved the United States and the Soviet Union between 1945 and 1991, a long lasting and global standoff. The "Arab cold war" of 1958-70, shorter and more localized, offers a second notable instance. In that case, Gamal Abdel Nasser, an Egyptian revolutionary, tried to upend the region while the Saudis led the effort to maintain the status quo. Their conflict culminated in the Yemen War of 1962-70, a vicious conflict that ended only with the death of Abdel Nasser.

The revolutionary bloc and its allies: Iran leads Syria, Qatar, Oman, and two organizations, Hezbollah and Hamas. Turkey serves as a very important auxiliary. Iraq sits in the wings. Paradoxically, several of these countries are themselves distinctly non-revolutionary.

The status-quo bloc: Saudi Arabia (again) leads, with Egypt, Jordan, Lebanon, Tunisia, Algeria, Morocco, and most Arabic-speaking states following, along with Fatah. Israel serves as a semi-auxiliary. Note that Egypt, which once led its own bloc, now co-leads one with Saudi Arabia, reflecting Cairo's diminished influence over the last half century.
Some states, such as Libya, sit on the sidelines.

The present cold war goes back to 1979, when Ayatollah Khomeini seized power in Tehran and harbored grand ambitions to destabilize other states in the region to impose his brand of revolutionary Islam. Those ambitions waned after Khomeini's death in 1989 but roared back to life with Ahmadinejad's presidency in 2005 along with the building of weapons of mass destruction, widespread terrorism, engagement in Iraq, and the claim to Bahrain.

The Middle Eastern cold war has many significant manifestations; here are four of them.

(1) In 2006, when Hezbollah fought the Israel Defense Forces, several Arab states publicly condemned Hezbollah for its "unexpected, inappropriate and irresponsible acts." An Iranian newspaper editorial responded with an "eternal curse on the muftis of the Saudi court and of the pharaoh of Egypt."

(2) The Moroccan government in March 2009 announced that it had broken off diplomatic relations with Tehran on the grounds of "intolerable interference in the internal affairs of the kingdom," meaning Iranian efforts to convert Sunnis to the Shiite version of Islam.

(3) The Egyptian government arrested 49 Hezbollah agents in April, accusing them of destabilizing Egypt; Hezbollah leader Hassan Nasrallah then confirmed that the group's leader worked for him.

By diverting passions away from the seemingly interminable Arab-Israeli conflict, the Middle Eastern cold war may appear to help reduce tensions. That, however, is not the case. However venomous relations between Fatah and Hamas may be, with each killing the other's operatives, they will in the end always join forces against Israel. Likewise, Washington will not find significant support in Saudi Arabia or any other members of its bloc vis-à-vis Iran. In the end, Muslim states shy from joining with non-Muslims against fellow Muslims.

Looking more broadly, the Middle Eastern cold war internationalizes once-local issues – such as the religious affiliation of Moroccans – imbuing them with Middle-East wide repercussions. Thus does this cold war add new flashpoints and greater volatility to what was already the world's most unstable region.

- Mr. Pipes (www.DanielPipes.org) is director of the Middle East Forum and Taube distinguished visiting fellow at the Hoover Institution of Stanford University.
Posted by jtf at 6:30 AM No comments: Links to this post

Don't Call What Happened in Iran Last Week an Election

It was a crudely stage-managed insult to everyone involved.


For a flavor of the political atmosphere in Tehran, Iran, last week, I quote from a young Iranian comrade who furnishes me with regular updates:

I went to the last major Ahmadinejad rally and got the whiff of what I imagine fascism to have been all about. Lots of splotchy boys who can't get a date are given guns and told they're special. 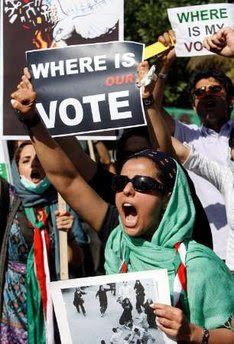 It's hard to better this, either as an evocation of the rancid sexual repression that lies at the nasty core of the "Islamic republic" or as a description of the reserve strength that the Iranian para-state, or state within a state, can bring to bear if it ever feels itself even slightly challenged. There is a theoretical reason why the events of the last month in Iran (I am sorry, but I resolutely decline to refer to them as elections) were a crudely stage-managed insult to those who took part in them and those who observed them. And then there is a practical reason. The theoretical reason, though less immediately dramatic and exciting, is the much more interesting and important one.

Iran and its citizens are considered by the Shiite theocracy to be the private property of the anointed mullahs. This totalitarian idea was originally based on a piece of religious quackery promulgated by the late Ayatollah Ruhollah Khomeini and known as velayat-e faqui. Under the terms of this edict—which originally placed the clerics in charge of the lives and property of orphans, the indigent, and the insane—the entire population is now declared to be a childlike ward of the black-robed state. Thus any voting exercise is, by definition, over before it has begun, because the all-powerful Islamic Guardian Council determines well in advance who may or may not "run." Any newspaper referring to the subsequent proceedings as an election, sometimes complete with rallies, polls, counts, and all the rest of it, is the cause of helpless laughter among the ayatollahs. ("They fell for it? But it's too easy!") Shame on all those media outlets that have been complicit in this dirty lie all last week. And shame also on our pathetic secretary of state, who said that she hoped that "the genuine will and desire" of the people of Iran would be reflected in the outcome. Surely she knows that any such contingency was deliberately forestalled to begin with.

In theory, the first choice of the ayatollahs might not actually "win," and there could even be divisions among the Islamic Guardian Council as to who constitutes the best nominee. Secondary as that is, it can still lead to rancor. After all, corrupt systems are still subject to fraud. This, like hypocrisy, is the compliment that vice pays to virtue. With near-incredible brutishness and cruelty, then, the guardians moved to cut off cell-phone and text-message networks that might give even an impression of fairness and announced though their storm-troop "revolutionary guards" that only one form of voting had divine sanction. ("The miraculous hand of God," announced Supreme Leader Ali Khamenei, had been present in the polling places and had announced a result before many people had even finished voting. He says that sort of thing all the time.)

The obvious evidence of fixing, fraud, and force to one side, there is another reason to doubt that an illiterate fundamentalist like Mahmoud Ahmadinejad could have increased even a state-sponsored plebiscite-type majority. Everywhere else in the Muslim world, in every election in the last two years, the tendency has been the other way. In Morocco in 2007, the much-ballyhooed Justice and Development Party wound up with 14 percent of the vote. In Malaysia and Indonesia, the predictions of increased market share for the pro-Sharia parties were likewise falsified. In Iraq this last January, the local elections penalized the clerical parties that had been making life a misery in cities like Basra. In neighboring Kuwait last month, the Islamist forces did poorly, and four women—including the striking figure of Rola Dashti, who refuses to wear any headgear—were elected to the 50-member parliament. Most important of all, perhaps, Iranian-sponsored Hezbollah was convincingly and unexpectedly defeated last week in Lebanon after an open and vigorous election, the results of which were not challenged by any party. And, from all I hear, if the Palestinians were to vote again this year—as they were at one point supposed to do—it would be highly improbable that Hamas would emerge the victor.

Yet somehow a senile and fanatical religious clique that has failed even to condition the vote in a country like Lebanon, where it has proxy and surrogate parties under arms, is able to reward itself by increasing its "majority" in a festeringly bankrupt state where it controls the media and enjoys a monopoly of violence. I think we should deny it any official recognition of this consolation. (I recommend a reading of "Neither Free Nor Fair: Elections in the Islamic Republic of Iran" and other productions of the Abdorrahman Boroumand Foundation. This shows that past penalties for not pleasing the Islamic Guardian Council have included more than mere disqualification and have extended to imprisonment and torture and death, sometimes in that order. A new movie by Cyrus Nowrasteh, The Stoning of Soraya M., will soon show what happens to those who dare to dissent in other ways and are dealt with by Ahmadinejad's "grass roots" fanatics.)

Mention of the Lebanese elections impels me to pass on what I saw with my own eyes at a recent Hezbollah rally in south Beirut, Lebanon. In a large hall that featured the official attendance of a delegation from the Iranian Embassy, the most luridly displayed poster of the pro-Iranian party was a nuclear mushroom cloud! Underneath this telling symbol was a caption warning the "Zionists" of what lay in store. We sometimes forget that Iran still officially denies any intention of acquiring nuclear weapons. Yet Ahmadinejad recently hailed an Iranian missile launch as a counterpart to Iran's success with nuclear centrifuges, and Hezbollah has certainly been allowed to form the idea that the Iranian reactors may have nonpeaceful applications. This means, among other things, that the vicious manipulation by which the mullahs control Iran can no longer be considered their "internal affair." Fascism at home sooner or later means fascism abroad. Face it now or fight it later. Meanwhile, give it its right name.

- Christopher Hitchens is a columnist for Vanity Fair and the Roger S. Mertz media fellow at the Hoover Institution in Stanford, Calif.
Posted by jtf at 3:00 PM No comments: Links to this post