CONFESSIONS OF AN ISLAMOPHOBE

Donald Trump—the Grownup in the Room on Immigration President Donald Trump speaks during a meeting with lawmakers on immigration policy in the Cabinet Room of the White House, Tuesday, Jan. 9, 2018, in Washington. Associated Press/Evan Vucci

Donald Trump gets called crazy a lot. Or infantile. Or senile. More than a bit of projection may be operative in these allegations, however. Watching Tuesday's televised discussion of immigration (video here) with Democratic and Republican congressional leaders, which the president opened to the media, it was hard not to come to an opposite conclusion.
Donald Trump was the real grownup in the room.

Yes, he made occasional jokes, but that's what grownups do to relax tense situations. To get politicians from both sides of the aisle talking to each other cordially in the current hyper-partisan atmosphere is no easy feat.  But Trump did that.  He showed himself to be what many of us have thought him to be from the outset, whatever the attendant melodrama -- a pragmatic businessman with moderately conservative views, even, dare I say it, sometimes weirdly wise. Above all, he is a man who likes to make progress, who wants to move things forward to a better day while recognizing that there is no perfect. How adult is that.

And, yes, it's possible this event was arranged to counteract the bad publicity from Michael Wolff's bilious, factually challenged book, but so what?  Basically, Trump (with the help of the cameras) shamed his fellow and gal politicians into civility and evidently cajoled them into at least a partial solution,  later, in closed session, to that most intractable of problems - immigration.  If Trump were anything like his detractors say he is, he couldn't have done either.  He even urged them on to a more global solution on immigration, reminding the politicians at the table they were closer to that goal than they realized. If that's crazy, maybe we need more of it.


But what of this partial solution?  By its very nature, ideologues of the left and right will not be satisfied. (Are they ever?)  Lefties want to solve DACA first and then, once the "Dreamers" have their "pathway to citizenship," the left promises to deal with border security and such things as chain migration and the trendily named Diversity Visa Lottery later.  Of course, that's nonsense. They have no intention of doing anything to mitigate the latter two and to the former they will only pay lip service.

Every politician in the room knew that and so, of course, did Trump.  He made sure it didn't happen.

On the right, Anne Coulter and others of her ilk will doubtless be disappointed, to put it mildly, that an impregnable border wall will not immediately be erected across the entire Southern border and all eleven million illegal aliens summarily ejected from our country. They will claim Trump promised this during the campaign, and he did at moments, but if you were listening carefully, you knew where he was ultimately going -- he hinted at it and more many times -- compromise.

And why not? Short of revolution, that's the only way in the end to get what you want.  Trump's a negotiator and we're all lucky for it.  As of now it looks as if chain migration and the lottery are dead and gone.  Good thing too, because they were both conduits for lethal terrorism, as we have seen, potential murder weapons. As for the wall, that awful word compromise will apply again. Some of it will be built. The question is -- will it be enough? Probably not.  Second question is -- will border security be better than it is now?  Probably yes.

Call me a wuss, but in the real world, I'll take "probably yes" any time.  And also, while I'm being a slavish Trump admirer, which undoubtedly I am (I admit it), I will remind all of the conclusion of Monday night's fantastic football game.  As fans will recall, seconds after things looked disastrous for Alabama, its young quarterback sacked for a 25-yard loss or whatever, putting the game seemingly out of reach, the Tide's same prodigious 18-year old freshman threw a forty-some yard pass for a touchdown and victory.  He did this by "looking off" his opponents, making them think he was throwing in another direction.

That's what Trump does.  He looks us off a lot. Everyone, especially the press, goes running off in another direction.  Then, when we're not paying attention or when we think all is lost and calamity is upon us,  something good happens -- tax reform passes, the American embassy is moved to Jerusalem, etc.  For a crazy, eleven-year old idiot, this guy seems to know what he's doing. For now, he's the best quarterback we've got.

One more thing, as they say at Apple. Some are feigning outrage that Trump, at the same meeting, proposed something as retrograde as a return to the dreaded earmarks (unrelated pet projects added to bills to get them passed). Mon Dieu! Trump's advocating corruption.  Well, not exactly. He's a realist who realizes that there was something good in earmarks -- Democrats and Republicans actually talked with each other and worked together -- mixed in with the bad.  Whether a return to earmarks would be a solution to this or whether, as he indicated might be true, there is a way to reform earmarks to make them work is not clear.  But Trump made his point.  Our politicians should learn to cooperate for the good of the people the way they used to -- or we like to think that they used to. Whichever is the case, again, his point is made.

Roger L. Simon is an award-winning novelist, Academy Award-nominated screenwriter and co-founder of PJ Media.  His latest book is I Know Best:  How Moral Narcissism Is Destroying Our Republic, If  It Hasn't Already.
Posted by jtf at 9:15 AM No comments: Links to this post

Everything you know about the Gospel of Paul is likely wrong

David Bentley Hart
is an Eastern Orthodox scholar of religion, and a philosopher, writer and cultural commentator. He is an associate at the Notre Dame Institute for Advanced Study, and his latest book is The New Testament: A Translation (2017). He lives in South Bend, Indiana.
This Idea was made possible through the support of a grant from Templeton Religion Trust to Aeon. The opinions expressed in this publication are those of the author(s) and do not necessarily reflect the views of Templeton Religion Trust.
Posted by jtf at 11:01 AM No comments: Links to this post

Posted by jtf at 10:20 AM No comments: Links to this post

Email ThisBlogThis!Share to TwitterShare to FacebookShare to Pinterest
Labels: Europe, Film Reviews and Features, Islam and The West

Sorry, SEC, Nick Saban is still the king -- and he's not going anywhere

Turning to libertarians for wisdom on immigration control is like asking Christian Scientists for advice about the best hospitals. 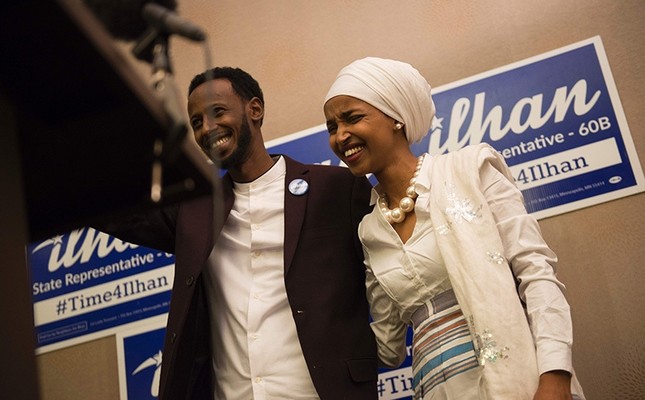 Ilhan Omar, candidate for State Representative for District 60B in Minnesota, with her husband Ahmed Hirisi, arrives for her victort party on election night, November 8, 2016 in Minneapolis, Minnesota. (AFP Photo)

Posted by jtf at 7:51 AM No comments: Links to this post

Posted by jtf at 7:38 AM No comments: Links to this post