Email ThisBlogThis!Share to TwitterShare to FacebookShare to Pinterest
Labels: The War on Drugs, Today's Tune

Why Fiction Mirrored Grim Reality on ‘Homeland’ This Season

Email ThisBlogThis!Share to TwitterShare to FacebookShare to Pinterest
Labels: Islam and Terrorism, Television 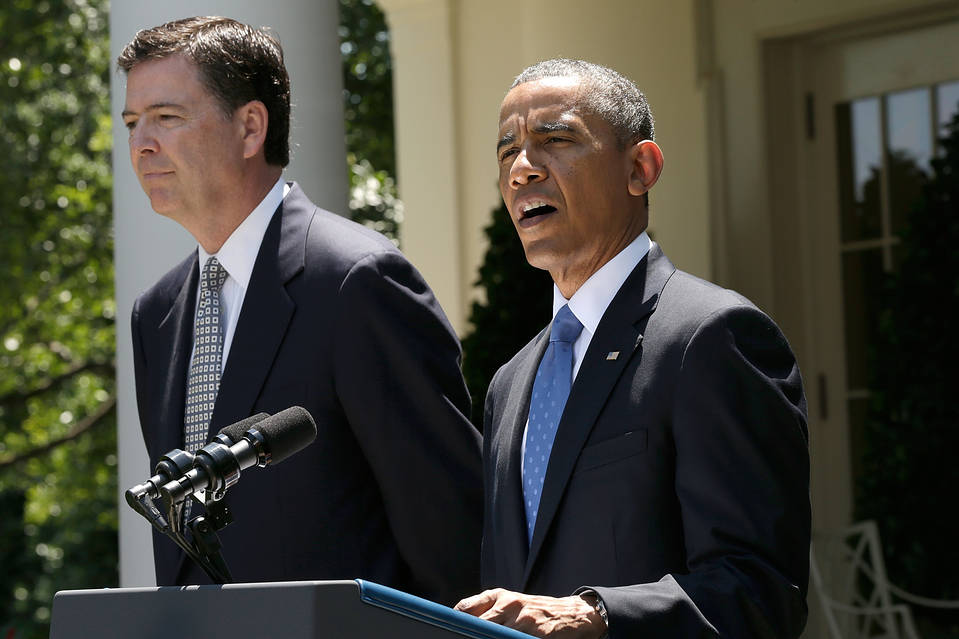 President Obama at the White House announcing his nomination of James Comey as FBI director in 2013. PHOTO: GETTY IMAGES

When President Obama in 2013 named James Comey to head the Federal Bureau of Investigation, the president must have sensed that he had picked someone who could be trusted to have his back, even if Mr. Comey had served in the George W. Bush administration. This week, Mr. Obama’s bet paid off when the G-man let Hillary Clinton skate.
Not that Mr. Comey had an explicit understanding with the White House. It’s just that Mr. Obama and his savvy political team must have known from the start that Mr. Comey was no John Adams.
Not the Adams of Founding Father fame, but John Adams when he was a younger man, who in 1770 agreed to defend British soldiers accused of massacring Boston colonists. The legal task was so unpopular, so dangerous, that nobody else would do it. Yet Adams believed that the law trumped politics, and that the men deserved a fair trial. In taking the case, he risked both his economic and political future. He took it anyway.
Mr. Obama announced Mr. Comey’s appointment by praising his “fierce independence and deep integrity.” And the press drooled over several episodes in his history that had given the former Justice Department official a reputation as tough and impartial. What this missed was that Mr. Comey had risen through the ranks precisely by being the opposite of tough. Washington rewards officials who are best at currying public favor, best at surviving, best at creating unfounded legends. And Mr. Comey had been steadily rising in Washington a long time.
Consider the episode for which he is perhaps most famous: opposing the George W. Bush administration’s “warrantless wiretapping” program in 2004. The left cast the then-deputy U.S. attorney general as a hero, breathlessly relating how he had rushed to the hospital bedside of then-Attorney General John Ashcroft to oppose reauthorization of the program. Mr. Obama, in choosing Mr. Comey, furthered this lore, feting him as a man who “was prepared to give up a job he loved rather than be part of something he felt was fundamentally wrong.”
Yet there was nothing tough or bold about opposing a program that was always going to be explosively controversial. Intervening wasn’t brave; it’s what any watch-your-own-backside official would do. There was nothing courageous in later spinning his role, or tarnishing well-meaning government lawyers whose interpretations of the policy differed from his own. Tough would have been standing behind a program that was vital in the war on terror; tough would have been defending the policy when it became a lightning rod for liberal and media criticism.
There was nothing tough, when Mr. Comey was a federal prosecutor in 2003, about expending vast time and resources to harass banker Frank Quattrone over the wording of a single ambiguous email. Tough would have been withstanding the post-Enron, antibusiness populist climate and refusing to burnish one’s prosecutorial credentials by turning Mr. Quattrone into a whipping boy. There was nothing tough about continuing to defend the FBI’s hapless investigation of non-anthrax-mailer Steven Jay Hatfill.Tough would have been admitting the FBI had bungled it.
And there was certainly nothing tough in 2003 about appointing a special prosecutor—an old buddy named Patrick Fitzgerald—to investigate the leak of Valerie Plame’s identity as a CIA employee. How tough was it to allow the hounding of Bush officials after Washington had turned against the war in Iraq? Tough would have been exercising the authority Mr. Comey had to shut the case after Mr. Fitzgerald quickly discovered the leaker’s identity. Mr. Comey instead let it run for three years, let it temporarily put a journalist in jail for refusing to disclose a source, and let it end with the scandalous perjury conviction of Scooter Libby. This isn’t tough. It’s going with the popular flow.
All of which is why it was no surprise that Mr. Comey this week let Mrs. Clinton off, despite the damning evidence amassed by the FBI of gross negligence in her handling of classified material. A prosecutor—for this was the position Mr. Comey essentially assumed on Tuesday—who put the law above all else would have brought charges, holding Mrs. Clinton to the same standard as other officials convicted of similarly “extremely careless” handling of classified material.
A prosecutor who had spent a lifetime with one eye on politics and one eye on his résumé would have behaved exactly as Mr. Comey did. He must have noticed that Mrs. Clinton, leading in the polls, had recently dangled a job offer in front of his boss, Attorney General Loretta Lynch. He saw President Obama pressing not just his thumb, but his whole body, on the scales of justice. Reporters were on Mrs. Clinton’s side. Democrats were ready to be furious if he decided the wrong way.
Mr. Comey wasn’t ready to go it alone and impose accountability on Mrs. Clinton. That would have been tough. That would have been brave. He instead listed her transgressions in detail and left it to the public to pass judgment at the ballot box in November. That isn’t how the system is supposed to work. But Mr. Comey is no John Adams.
Write to kim@wsj.com.
Posted by jtf at 7:31 AM No comments:

Somali teens and men in their 20s invaded the Linden Hills neighborhood for three consecutive days during Ramada in late June.


Editor’s note: The name of the victim in this story has been changed to protect her safety. Sarah Penskey is not her real name.


Politician raped by Muslims, lies to cops to protect them

Read WND’s initial report from earlier this week on the terrorizing of Linden Hills by Somali refugees.
Posted by jtf at 6:02 AM No comments: