Venezuela provides a lesson to anyone tempted to feel the Bern. 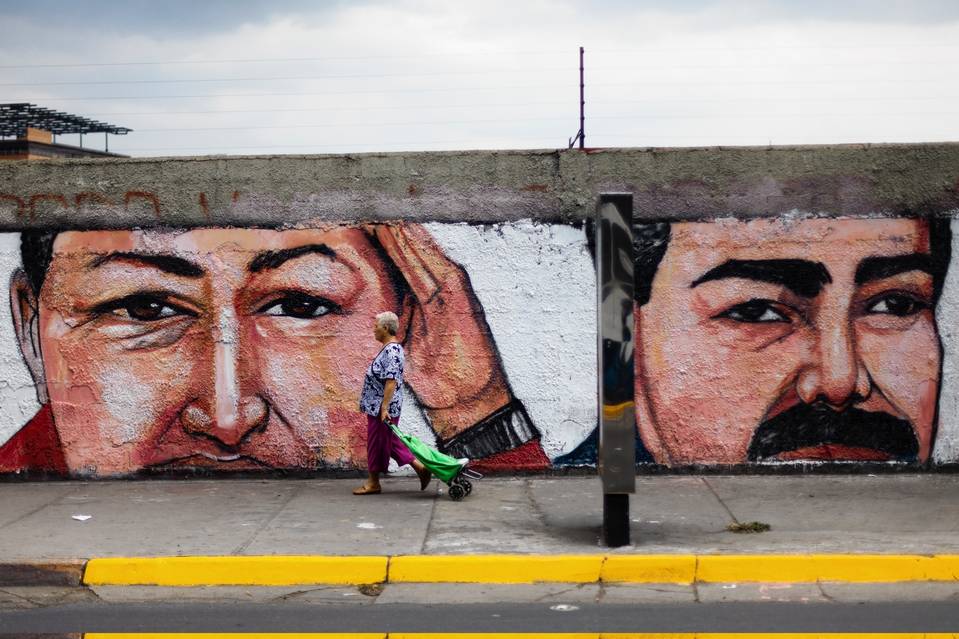 The Big Brothers are watching in Caracas, Venezuela. PHOTO: AFP/GETTY IMAGES
BRET STEPHENS
http://www.wsj.com/
May 16, 2016
Noah, my 10-year-old son, was reading over my shoulder a powerful story about the state of medicine in Venezuela by Nick Casey in Sunday’s New York Times. We scrolled through images of filthy operating rooms, broken incubators and desperate patients lying in pools of blood, dying for lack of such basics as antibiotics.
“Dad, why are the hospitals like this?”
“Socialism.”
“What’s socialism?”
I told him it’s an economic system in which the government seizes and runs industries, sets prices for goods, and otherwise dictates what you can and cannot do with your money, and therefore your life. He received my answer with the abstracted interest you’d expect if I had been describing atmospheric conditions on Uranus.
Here’s what I wish I had said: Socialism is a mental poison that leads to human misery of the sort you see in these wrenching pictures.
The lesson seems all the more necessary when discredited ideologies are finding new champions in high places. When Venezuelan President Hugo Chávez died in 2013, an obscure U.K. parliamentarian tweeted, “Thanks Hugo Chavez for showing that the poor matter and wealth can be shared. He made massive contributions to Venezuela & a very wide world.”
The parliamentarian was Jeremy Corbyn, now leader of the Labour Party.
Let’s not stop with Mr. Corbyn. In its day, Chavismo found champions, apologists and useful idiots among influential political figures and supposed thought leaders. In Massachusetts there were Joseph P. Kennedy and Rep. Bill Delahunt, who arranged a propaganda coup for the strongman by agreeing to purchase discounted Venezuelan heating oil for U.S. consumers. The Nation editor Katrina vanden Heuvel extolled Chávez for defying the Bush administration and offering “an innovative four-point program to renew and reform the U.N.”
Up north, Naomi Klein, Canada’s second-most unpleasant export, treated Chávez as heroically leading the resistance to the forces of dreaded neoliberalism. Jimmy Carter mourned Chávez for “his bold assertion of autonomy and independence for Latin American governments and for his formidable communication skills and personal connection with supporters in his country and abroad to whom he gave hope and empowerment.”
There are lesser names to add to this roll call of dishonor— Michael Moore, Sean Penn—but you get the point: “Democratic socialism” had no shortage of prominent Western cheerleaders as it set Venezuela on its road to hyperinflation, hyper-criminality, water shortages, beer shortages, electricity blackouts, political repression and national collapse. Chávez and his successor, Nicolás Maduro, gained prestige and legitimacy from these paladins of the left. They are complicit in Venezuela’s agony.
And so to the U.S. election, specifically the resolutely undead presidential candidacy of Vermont Sen. Bernie Sanders.
The Sanders campaign is no stranger to accusations that its brand of leftism is cut from the same cloth that produced Chavismo.
“Yesterday, one of Hillary Clinton’s most prominent Super PACs attacked our campaign pretty viciously,” Mr. Sanders complained in September, noting that they “tried to link me to a dead communist dictator.”
The senator protests too much. As mayor of Burlington, Vt., in the 1980s, he boasted of conducting his own foreign policy, including sister-city relations with Puerto Cabezas in Nicaragua and Yaroslavl in the Soviet Union. On a 1985 trip to Nicaragua, he lavished praise on Daniel Ortega’s communist regime—Chavismo’s older cousin.
“In terms of health care, in terms of education, in terms of land reform . . . nobody denies they [the Sandinistas] are making significant progress in those areas,” then-Mayor Sanders told one interviewer in 1985. “And I think people understand that and I think the people of Nicaragua, the poor people, respect that.”
If Mr. Sanders ever rethought or recanted those views, I’m not aware of it.
But the point isn’t what Mr. Sanders may have thought of the Sandinistas in the 1980s or the Chavistas in the past decade. It’s that the type of socialism that the senator espouses—$18 trillion in additional government spending over the next decade, accusations that Wall Street is a criminal enterprise and the continuous demonization of “millionaires and billionaires”—is not all that different from its South American cousins.
Democratic socialism—whether Chavez’s or Sanders’s—is legalized theft in the name of the people against the vilified few. It is a battle against income inequality by means of collective immiseration. It is the subjugation of private enterprise and personal autonomy to government power. Mr. Sanders promises to pursue his aims on the Scandinavian model, as if that was a success, and as if Americans are Scandinavians. It wasn’t. We aren’t. Bernie’s Way paves the same road to serfdom that socialism does everywhere.
That’s a fact Americans might have learned after the Berlin Wall fell in 1989. We didn’t. Take the time to tell your kids what socialism is, and does, before they too feel the Bern.
Write bstephens@wsj.com.
Posted by jtf at 8:50 AM No comments: Links to this post

Posted by jtf at 8:02 AM No comments: Links to this post 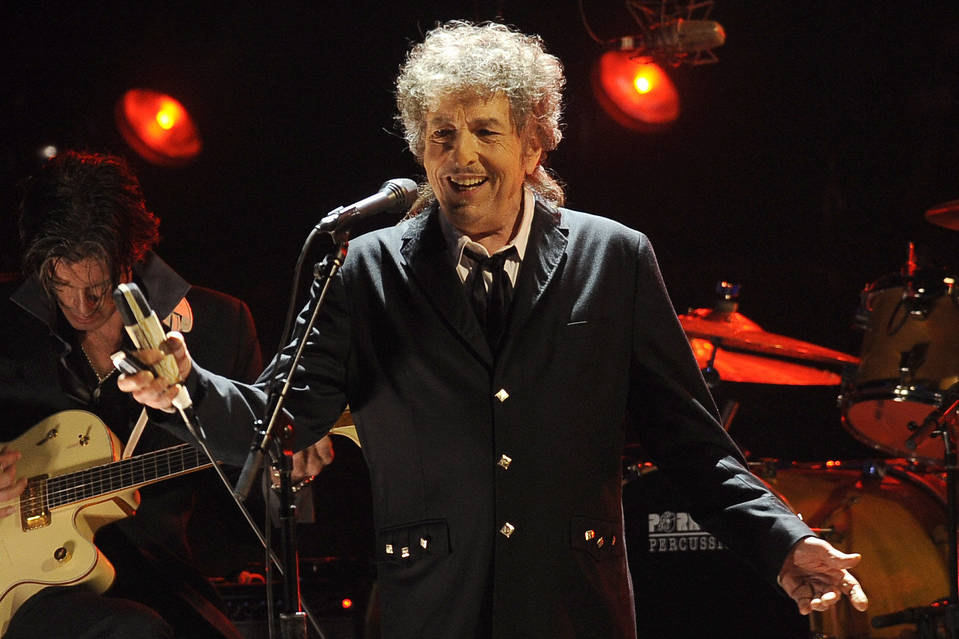 Today's Tune: The Monkees - You Bring The Summer

Posted by jtf at 11:46 AM No comments: Links to this post 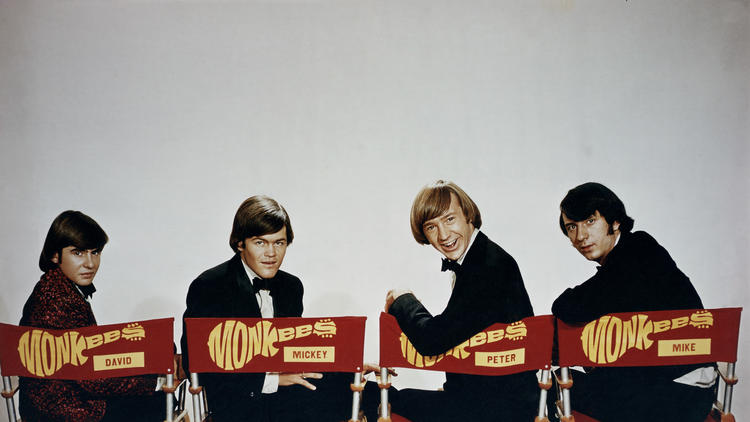 Who's the Conservative Heretic? In his coquettish refusal to accept the Donald, Paul Ryan says he cannot betray the conservative "principles" of the party of Abraham Lincoln, high among which is a devotion to free trade.

But when did free trade become dogma in the Party of Lincoln?

As early as 1832, young Abe declared, "My politics are short and sweet, like the old woman's dance. I am in favor of a national bank ... and a high protective tariff. These are my sentiments and political principles."

Campaigning in 1844, Lincoln declared, "Give us a protective tariff and we will have the greatest nation on earth."

Abe's openness to a protective tariff in 1860 enabled him to carry Pennsylvania and the nation. As I wrote in "The Great Betrayal: How American Sovereignty and Social Justice Are Being Sacrificed to the Gods of the Global Economy" in 1998:

"The Great Emancipator was the Great Protectionist."

Vermont's Justin Morrill, who shepherded GOP tariff bills through Congress from 1860 to 1898, declared, "I am for ruling America, for the benefit, first, of Americans, and for the 'rest of mankind' afterwards."

In 1890, Republicans enacted the McKinley Tariff that bore the name of that chairman of ways and means and future president.

Too few Republicans of McKinley's mindset sat in Congress when NAFTA and MFN for China were being enacted.

Under protectionist policies from 1865 to 1900, U.S. debt was cut by two-thirds. Customs duties provided 58 percent of revenue. Save for President Cleveland's 2 percent tax, which was declared unconstitutional, there was no income tax. Commodity prices fell 58 percent. Real wages, despite a doubling of the population, rose 53 percent. Growth in GDP averaged over 4 percent a year. Industrial production rose almost 5 percent a year.

In McKinley's first term, the economy grew 7 percent a year. After his assassination, Vice President Theodore Roosevelt took over. His reaction to Ryan's free-trade ideology? In a word, disgust.

"Pernicious indulgence in the doctrine of free trade seems inevitably to produce fatty degeneration of the moral fibre," wrote the Rough Rider, "I thank God I am not a free trader."

When the GOP returned to power after President Wilson, they enacted the Fordney-McCumber Tariff of 1922. For the next five years, the economy grew 7 percent a year.

While the Smoot-Hawley Tariff, signed eight months after the Crash of '29, was blamed for the Depression, Nobel laureate Milton Friedman ferreted out the real perp, the Federal Reserve.

Every Republican platform from 1884 to 1944 professed the party's faith in protection. Free trade was introduced by the party of Woodrow Wilson and FDR.

Our modern free-trade era began with the Trade Expansion Act of 1962. Among the eight no votes in the Senate were Barry Goldwater and Prescott Bush.

Even in recent crises, Republican presidents have gone back to the economic nationalism of their Grand Old Party. With the Brits coming for our gold and Japanese imports piling up, President Nixon in 1971 closed the gold window and imposed a 10 percent tariff on Japanese goods.

Ronald Reagan slapped a 50 percent tariff on Japanese motorcycles being dumped here to kill HarleyDavidson, then put quotas on Japanese auto imports, and on steel and machine tools.

Reagan was a conservative of the heart. Though a free trader, he always put America first.

What, then, does history teach?

The economic nationalism and protectionism of Hamilton, Madison, Jackson, and Henry Clay, and the Party of Lincoln, McKinley, Teddy Roosevelt, and Coolidge, of all four presidents on Mount Rushmore, made America the greatest and most self-sufficient republic in history.

And the free-trade, one-worldism of Bush I, Clinton, Bush II and Obama enabled Communist China to shoulder us aside us and become the world's No. 1 manufacturing power.

Like Britain, after free-trade was adopted in the mid-19th century, when scribblers like David Ricardo, James Mill and John Stuart Mill, and evangelists like Richard Cobden dazzled political elites with their visions of the future, America has been in a long steady decline.

If we look more and more like the British Empire in its twilight years, it is because we were converted to the same free-trade faith that was dismissed as utopian folly by the men who made America.

Where in the history of great nations -- Britain before 1850, the USA, Bismarck's Germany, postwar Japan and China today -- has nationalism not been the determinant factor in economic policy?

Speaker Ryan should read more history and less Ayn Rand
Posted by jtf at 9:51 AM No comments: Links to this post

Disturbing pronouncements on the faith from the Vicar of Christ. The Party of Scientism, Not Science

Karl Marx
In a commencement speech at Rutgers, President Obama took an indirect shot at Donald Trump and the Republicans:

Facts, evidence, reason, logic, an understanding of science: These are good things. These are qualities you want in people making policy . . . We traditionally have valued those things, but if you’re listening to today’s political debate, you might wonder where this strain of anti-intellectualism came from.

The Faith of Christopher Hitchens