The ageless legend and the powerful new face of the game are at the extreme arcs of those lives, but they are now serving as gifted bookends for nearly three-quarters of a century worth of this baseball-mad town's rich St. Louis Cardinals history. The 88-year-old Musial is gracefully approaching the end of the journey, while the 29-year-old Pujols is only now blossoming in the fullness of his prime. 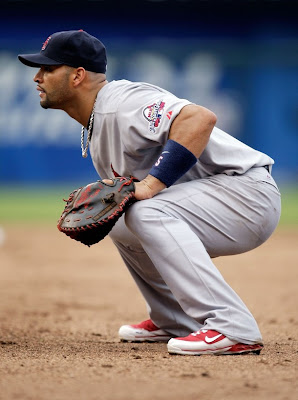 KANSAS CITY, MO - JUNE 20: Albert Pujols of the St. Louis Cardinals awaits a play during the game against the Kansas City Royals on June 20, 2009 at Kauffman Stadium in Kansas City, Missouri.

So why are they laughing and smiling so gleefully?

Probably because they both realize that with all the eyes of the baseball world focused on St. Louis during Major League Baseball's All-Star Game celebration, this event should be remembered mostly as a Cardinal-centric doubleheader:

This will be a long overdue tribute to Musial's glorious past and a high-profile showcase of Pujols' ascent to the pinnacle of their sport. If baseball does this Midsummer Classic party right, the moment will serve as a belated and incredibly emotional reminder to the contemporary baseball world why Stan the Man belongs on that very narrow cliff where only baseball's most regal immortals dwell.
If we're lucky, during Tuesday night's pregame festivities, Musial will get the same poignant royal treatment the late Ted Williams received 10 years ago when he was the guest of honor at the All-Star Game in Boston's Fenway Park. That's what I'm hoping for.

I want to see Musial come onto the field sitting on the back of a fancy convertible, then see him engulfed by the current stars of the game when he is carted out to the pitcher's mound during pregame introductions. I want to hear an ovation from Cardinal Nation that will shake the foundations of new Busch Stadium and leave no dry eyes. I want this night to make up for all the slights, both real and imagined, that Musial has dealt with over the past half-century when he was never quite given the praise he richly deserved.

Even while smart baseball folks have long understood he belonged in the conversation whenever discussing the greatest players of all time, history continues to show that most casual baseball lovers have little sense of the enormity of The Man's place in history.

In 1999, Musial was named to the Major League Baseball All-Century Team, but only because a special baseball committee corrected a stunning fan-vote slight (the 24-time all-star finished 11th in fan voting among outfielders).

"I can't think of any all-time great in any sport who gets left out of more who's-the-greatest conversations than Stan Musial," ESPN baseball writer Jason Stark wrote in 2007.

Cardinal Nation, a particularly sensitive lot, use Musial as Exhibit A in its case that the Redbirds have been constant victims of East Coast media bias. The most often uttered words you hear to describe Musial in these parts is "If Stan had played in Boston or New York, he'd be bigger than Ted Williams or Joe DiMaggio."

And maybe they're right.

But the times have changed, and conspiracy-preoccupied Redbirds loyalists can't cling to those suspicions with Pujols, who has reaped the benefits of our 24-hour, multi-media modern world. Pujols does not need to perform on the New York stage to get his just props. "I always thought up until last year that the best player in baseball was Alex Rodriguez," said Pete Rose, baseball's career hits leader. "But Pujols has certainly earned the reputation of being the most feared hitter in baseball now. Albert plays hard, he plays every day, and the reason he's probably the best hitter in baseball is because he's a very intelligent hitter with two strikes. When you put the ball in play with two strikes that's what makes you the best hitter."

Rose lives in Los Angeles, but he has no difficulty discovering Pujols' many athletic gifts now that El Hombre has become the very visible face of baseball. He was a Sports Illustrated cover boy during spring training, and this week the magazine revisited the Pujols saga, hailing him as "maybe, just maybe, the most perfect player who ever did live."

ESPN has made him mandatory SportsCenter viewing. On Friday night, it put together a montage of his 32 home runs. During the offseason, Pujols traveled to Bristol, Conn., to film a SportsCenter TV commercial (note to visiting baseball lovers: though it is a clever commercial, no one — I mean NO ONE — in St. Louis calls him The Machine. That's not his nickname. El Hombre is).

So whenever Pujols' splendid career is done, no one will have to fret that he was ever a victim of circumstance toiling in obscurity in some publicity-starved Midwest berg. Everyone knows him. Everyone sees him each night on ESPN. They have vivid televised evidence of why he's the best in the business.

"There's nothing he can not do on a consistent basis," said former Cardinals all-star outfielder Vince Coleman. "Albert is one of those guys who was touched by God to be a complete player. He's a guy that could have played with our teams with Whitey Herzog, and I can't say that about a lot of guys who hit home runs. Albert hits a lot of home runs, but doesn't strike out. He puts the ball in play, plays good defense, produces RBIs."

Everyone loves Pujols. Ex-players sing his praises in reverent tones. Listen to former all-star Jack Clark, who considers it a treat to see Pujols work every night.

"What do I like the most about Albert?" Clark asked. "Oh that's easy. It's that drive, that intensity where he will not give away an at-bat, will not give away a pitch. It is a long season, 162 games, and sometimes you just don't feel like (playing). You're struggling. You're in different time zones. Day games, night games, planes, buses, the traveling. Sometimes you just don't have it. I remember Willie Mays telling me that there were times when he was in a slump (but) 'I never let the other team know I was ... by the way I carried myself to the plate like I didn't know what I was doing, like I didn't have a chance.'

"Albert's just like Willie, because he's always focused," said Clark. "Every day, he has the energy, the will to win, the drive to beat the other team and be the best player in the league — in both leagues — maybe even in the history of the game when all is said and done." 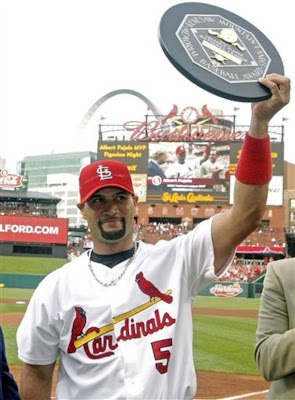 St. Louis Cardinals' Albert Pujols acknowledges the fans as he receives his Most Valuable Player Award from the 2008 season before the baseball game against the Kansas City Royals, Friday, May 22, 2009, in St. Louis.

Yes, Pujols really is that good, all-time good, just like Musial. Maybe one day this connection will be even stronger, when they erect a statue to Pujols and memorialize him as another "perfect knight."

But of course we know that nobody's perfect, not even Pujols. So I went to Cardinals Hall of Famer Lou Brock, the swiftest Redbird of them all, to see if there was some flaw he could detect in El Hombre. "Well when you only steal 10 bases, that's not great, that's a surprise," the Base Burglar said with a devilish chuckle. "He gets his stolen bases by the element of surprise. He does it when they're not looking. But Albert is aggressive. .. But when you start talking about great base stealers, this is a guy who says 'Look at me, I'm going to steal this base anyway when you're looking.'"

Brock still had that playful look on his face.