Musial tribute was kind of a dud

In 1994, PBS aired the documentary "Baseball," by acclaimed filmmaker Ken Burns. It was a terrific piece of work, but in St. Louis we remembered it for a regrettable reason: Stan Musial was largely overlooked. 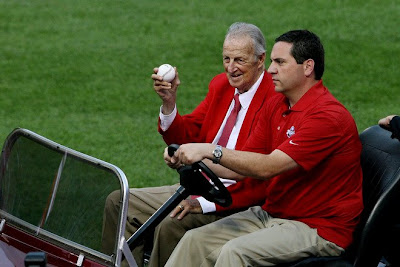 ST LOUIS, MO - JULY 14: Hall of famer Stan Musial holds up the ball for the ceremonial first pitch at the 2009 MLB All-Star Game at Busch Stadium on July 14, 2009 in St Louis, Missouri. (Photo by Elsa/Getty Images)

"The Man" was an afterthought, squeezed in for what seemed to be about 90 seconds in between the loving tributes and fawning testimonials to Joe DiMaggio, Ted Williams and other East Coast baseball icons.

And the slight just reinforced the notion that Musial — for whatever reason — had never quite received the accolades he has deserved through many years of graceful, ambassadorial retirement. Musial, after all, wasn't even voted onto the All-Century team by the fans in 1999. Commissioner Bud Selig added Musial to the team to correct an embarrassing oversight.

That's the way it's been for Musial, and I'm not sure why. Maybe he didn't have that so-called signature moment, like DiMaggio's 56-game hitting streak in 1941, or Ted Williams' .406 batting average the same year. Maybe it's because Musial never spent a lot of time promoting himself and campaigning for respect and making sure to brand his name on a more prominent spot in history.
When the All-Star Game came to St. Louis in the summer of 2009, we thought all of that would change for Musial. Finally, he'd have the kind of showcase that would reopen the vault and display his collection of 3,630 hits, 475 homers, 1,951 RBIs, three MVPs, seven batting titles and 24 All-Star Games. And then it would be impossible for any baseball fan, young or old, to ignore the magnitude of his career.

Except that it didn't happen, at least not the way it should have. Tuesday night, Busch Stadium was filled to capacity with 46,760 fans who couldn't wait to embrace The Man, and his moment. If you were there, you were probably ready to cry, to let it all out, to share a deeply sentimental experience with other Cardinals fans. You were probably hoping for a memory that would last a lifetime. Something truly special. 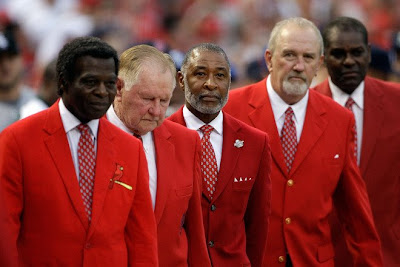 Sadly, the moment fell flat. Musial was brought out in a golf cart, and it transported him slowly along the dirt path leading from the wagon gate in right field, past the first-base (National League) dugout, and toward home plate.

I don't know about you, but I expected someone — anyone — to lead the National League players out of the dugout to shake his hand, or just offer a highly visible standing ovation. I expected the American League players to do the same. And we would have a tender scene, reminiscent of the spontaneous affection bestowed upon Williams at Fenway Park in 1999. That was the gold standard.

And what Major League Baseball did for Musial wasn't close to enough to hitting that standard. It came off as a bit cold, and spare.

LA Dodgers manager Joe Torre — an NL coach and popular former Cardinal — pointed to Musial and clapped. Excellent. So where were the other National Leaguers? Hello? Anybody want to chip in? Say hello to Stan? Maybe a little pat on the back, fellas?

No. The great Musial was carted down to the grassy area between the NL dugout and home plate. Musial was left in place, so he'd be at the right spot to hand the baseball to President Barack Obama for the ceremonial first pitch.

Obama came over to Musial and paid respect, warmly shaking the legend's hand and talking to Musial for a few moments. And then Obama went to the mound and threw a soft changeup that was scooped up by designated catcher Albert Pujols, who prevented a wild pitch.

Obama greeted the other Cardinals Hall of Famers, shook their hands, and thoughtfully returned to say goodbye to Musial. And that was it. The Man was in the golf cart, still sitting there, with nothing really happening around him. 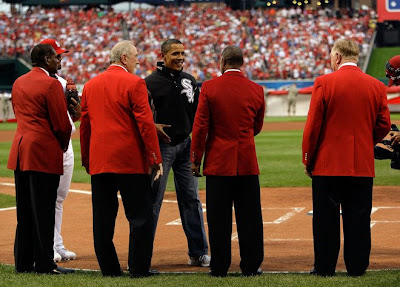 The Man was sitting there, all alone. No players approached him, and then the classy Torre came over and chatted with Stan for a minute or so. One baseball guy in the entire ballpark — Torre — seemed to understand what was required here.

Look, maybe I'm being petty and unreasonable about all of this. I understand that this was a national game, and it's a celebration of all players and all franchises and the game we love so much. That's why I don't have an issue with Obama wearing the jacket of his favorite team, the White Sox, though I do think the president could have given a nod to the host team and host city by also wearing a Cardinals hat.

Musial was overshadowed by presidential pomp and circumstance and that's inevitable. When the president comes to town, he's going to upstage everyone in the place, and that includes the baseball heroes — even the gallant baseball hero with the .331 career batting average who is 88 years old and slowing down.

Maybe my expectations were too high. MLB tried to do what was best. And I know how much Selig personally appreciates Musial. But after "Baseball" by Ken Burns, and after the snub in the voting for the All-Century baseball team, I believed there was no way it could happen again, not on this grand occasion, not in St. Louis, not in Stan's town. But it did.

You deserved better.
Posted by jtf at 6:32 AM