Dissent on college campuses during the Vietnam War could turn nasty.
When students gathered in common rooms to watch television in the early 1970s, the seditious insisted on “Star Trek” reruns; the best and brightest would demand to switch to “Cronkite.”

Back then, “Cronkite” meant the news. 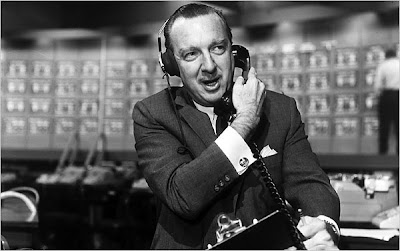 It’s almost impossible to convey the place Walter Cronkite held in American life for the 19 years he spent as the anchor of “The CBS Evening News.” It wasn’t just that he narrated the spikes in modern history, from the Kennedy assassination to the civil rights movement to the election of Ronald Reagan.

People tuned in to his program even on routine days when his broadcast — Senate subcommittee hearings, gas prices, détente talks with the Soviet Union — was as dull as toast. Mr. Cronkite’s air of authority, lightly worn and unquestioned, was unusual even then, but nobody comes close to it now.

Mr. Cronkite retired in 1981 at 64 and spent much of his remaining years giving charmingly self-deprecating interviews for tributes and retrospectives with titles like “Cronkite Remembers.” In one he explained his legendary status by saying, “Everything we did was for the first time.”

For viewers, however, it sometimes seems as if everything Mr. Cronkite did was for the last time, that his outsize tenure bracketed a bygone era when America was, if not a more confident nation, certainly a more trusting one.

And there’s a reason Mr. Cronkite stood out from other television newsmen of his time, and it wasn’t his credentials, even though he covered D-Day from a B-17 as a United Press correspondent, went on bombing missions over Germany and opened United Press’s first postwar bureau in Moscow.

It was his looks.

Mr. Cronkite, a dentist’s son who began his career as a radio announcer in Kansas City, Mo., wasn’t glossily good-looking in the starched, blow-dried way of so many of his successors; if anything, he was closer to homely than handsome. But behind a crisp speaking style, he had a natural, unaffected demeanor that made him more inviting than other television reporters.

When he took over from Douglas Edwards in 1962, Mr. Cronkite would announce the day’s events, and then, as anchors do now, turn to correspondents in the field. Those reporters — and in the early 1960s the CBS A-team included Mike Wallace, Howard K. Smith and Morley Safer — often read their reports sitting at desks in front of curtains in out-of-town studios, as stiff and unsmiling as hostages in a ransom tape.

Mr. Cronkite, who sat at a desk next to a typewriter in what at least seemed like a bustling newsroom, would fiddle with his earpiece, move his chair and glance down at his notes; he looked like a kindly newspaper editor interrupted in the middle of a big news day, busy, of course, but never too busy to explain the latest developments to out-of-town visitors. 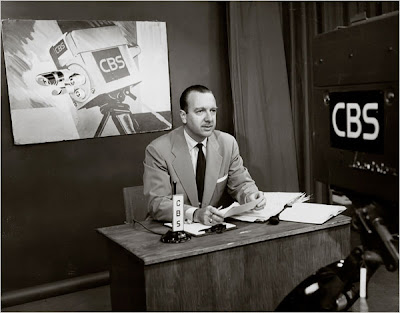 Mr. Cronkite became a star when he was chosen to lead CBS’s coverage of the Democratic and Republican national conventions in 1952, the first presidential election year in which television outshone radio.
Photo: CBS News

He made history just by rising from that desk to check the wires. Every Kennedy documentary includes the clips of Mr. Cronkite announcing that the president had been shot and removing his thick black glasses for a pause after stating that Kennedy was dead. Those live moments of television news are as embedded into the tragedy as John-John’s salute and the Zapruder film.

No account of Lyndon B. Johnson’s presidency leaves out the night in February 1968 when Mr. Cronkite concluded, on the air, that the Vietnam War could not be won. He had a toehold on the first manned lunar landing and a hand in the Begin-Sadat Middle East peace talks.

Viewers mostly associate him with calamity, but he liked to align himself with good news, shedding his famed neutrality to express boyish enthusiasm for what he called, somewhat quaintly, “the conquest of space.” (His first words when Neil Armstrong walked on the moon on July 20, 1969, were “Oh, boy.”)

But he didn’t turn into “Uncle Walter” overnight, and his last name didn’t become synonymous with television news until well into the 1970s. For many years “The Huntley-Brinkley Report” on NBC had higher ratings and more pizzazz; CBS caught up only after Chet Huntley retired in 1970.

When Mr. Cronkite was No. 1, the nightly news mattered. College students nowadays get their information from blogs and Comedy Central, not CBS. Families don’t gather in the den to eat dinner in front of “World News Tonight With Charles Gibson.” Brian Williams and Katie Couric wouldn’t dare sign off with the words “and that’s the way it is.”

The television news business long ago lost that kind of prestige and importance; the audience for evening newscasts has so dwindled that this year there were more viewers on an average night for “American Idol” than for the programs on CBS, NBC and ABC combined.

Anchors try to project authority with sprawling desks and fancy computer graphics: “The CBS Evening News” studio today looks like a NASA command post. When Mr. Cronkite became anchor, the setting was somber and almost touchingly low-tech. For a report on unrest in Algeria in August 1962, Mr. Cronkite looked up at a screen to introduce a correspondent in Paris connected “via Telstar.” The boxy television sets along the wall of his studio look like the portholes of a Jules Verne submarine.

For years Mr. Cronkite read the news as if he were still on radio. On April 4, 1968, the night the Rev. Dr. Martin Luther King Jr. was assassinated, the news came too late in the day for CBS to provide many images from the scene. America went into shock while staring at Mr. Cronkite as he read the bare facts aloud. His face, subdued, grave but studiously unemotional, was reassuring in a way that President Johnson, who that night gave a speech urging people to stay calm, was not.

Over the years, not only did the CBS studio get fancier, but also the technology, production values and expectations. But Mr. Cronkite didn’t change much, and that was the most reassuring thing of all.

Multimedia
Slide Show
The Most Trusted Man in America