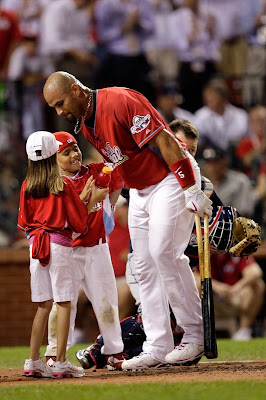 ST LOUIS, MO - JULY 13: National League All-Star Albert Pujols(notes) of the St. Louis Cardinals is greeted by children after competing in the second round of the State Farm Home Run Derby at Busch Stadium on July 13, 2009 in St. Louis, Missouri. (Photo by Jamie Squire/Getty Images)

The St. Louis Cardinals first baseman is having one of the greatest seasons in history, putting up numbers last approached by Babe Ruth, Hack Wilson and Jimmie Foxx more than 70 years ago. Yet, it is his 32 home runs, 85 RBI and .338 batting average that have drawn suspicion, leaving Pujols hurt and angry.

"For people to be suspicious of me because of the year I'm having and for people to say I just haven't been caught, that makes me angry and disappointed.

Pujols, who fell .012 points short in batting average of becoming the first player since Hank Aaron in 1957 to hold the Triple Crown at the All-Star break, has spent most of his 8½-year career putting up MVP numbers and building an impeccable reputation. But he has become more outspoken, talking about baseball's drug problem, players who don't respect the game and his future in St. Louis.

Pujols, 29, says he was tested six times last year as part of MLB's drug policy. But if that's not good enough, Pujols vows to take a test every day and, if he is caught using performance-enhancing drugs, he says, he will pay back the Cardinals every penny he has earned.

"Come test me every day if you want," says Pujols, who has the most home runs at the All-Star break since Barry Bonds hit 39 and Luis Gonzalez hit 35 in 2001. "Everything I ever made in this game I would give back to the Cardinals if I got caught."

Pujols realizes America is looking for a hero. He is volunteering, only if America will let him.

"I can understand why people don't know who they can trust or their hero was caught," says Pujols, who has finished first or second in the National League MVP balloting in five of his eight seasons, with numbers remaining consistent before and since steroid testing began in 2003. "I want to be the guy people look up to. But I want to be the person who represents God, represents my family and represents the Cardinals the right way.

"So many people can't wait until I do something negative. I can't understand it. That's sad, because I want to be that poster boy in baseball. Just give me the chance."

Pujols, who has three children with his wife, Deidre, and another baby on the way, goes to great lengths to maintain his untarnished image and uphold his deep religious beliefs. He doesn't drink or smoke. He doesn't have a tattoo or wear earrings. He doesn't go to bars, nightclubs or any place where his character could be assaulted.

"If we're in a hotel and a woman gets on the elevator by herself, I'll wait for the next one," Pujols says. "People have their agenda. You have to be careful who you can trust.

"It's the same thing with pictures. I'll have my picture taken on the field, but not off the field. Nowadays with photo technology, you can do so many things." 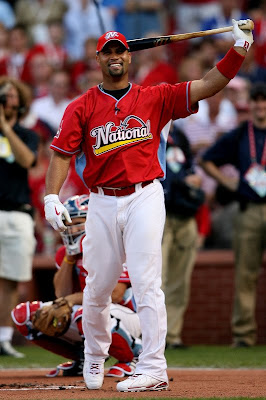 Pujols' on-field skills are admired by nearly every major leaguer, but he is also among the game's most respected players.

"He's my man," San Francisco Giants third baseman Pablo Sandoval says. "He's one I look up to. I think we all do."

Says Giant Randy Johnson, a five-time Cy Young Award winner, "I think Albert is the one guy in our game who could go to the opposition, say something, and they'd listen. That's how highly people regard him."

And the 6-3, 230-pounder is saying things more often, especially when it comes to showing respect for the game. The baseball cap should be worn properly. The jersey tucked. The back pockets in.

"I see teams take their jerseys out when the game is over," he says. "To me, that's not professional. I don't care what you do when you get off the field, but don't do it on the field. You don't want kids to see negative things."

Pujols, drafted in the 13th round in 1999, lives by his creed. He is in constant motion from the moment he enters the clubhouse five hours before game time until he departs late at night after lifting weights. Never is he clowning around, playing cards or watching TV.

"You've got to stay hungry," says Pujols, whose four grand slams this season are one shy of the NL record. "I see talent that is wasted after guys have one big year. I see players in the draft getting all of this money, thinking that guarantees them a trip to the big leagues.

"Just because you make $100 million, just because people say you're one of the best, doesn't mean you don't work hard."

Pujols' hard work has him on pace to go where only Ruth, Wilson and Foxx have been — a season with at least 50 home runs, 150 RBI and a .330 average. Then again, he already surpassed those Hall of Famers and every other player in history with at least 30 home runs and 100 RBI in his first eight seasons.

"It's as if he wants to not only be the best player today," Cardinals outfielder Chris Duncan says, "but the greatest player who ever played."

Pujols received a record 5.3 million votes in All-Star Game fan voting and is eager to be the unofficial host of the festivities in his hometown, where he is scheduled to catch President Obama's first pitch Tuesday. He purchased a 24-person suite and tickets for 42 other friends and family members. It's a chance for everyone to celebrate his career and recognize he is the best player.

It also could be the prelude to his farewell.

Pujols, who signed a seven-year, $100 million contract in February 2004, is a free agent in two years. There are 16 players this year earning more than his $16 million salary, which includes four players who will be at the game. The question that haunts Cardinal Nation is whether the team will pay to keep him.

"I'm happy where I am and would love to be a Cardinal for the rest of my career," Pujols says. "If it's time for me to move on, I'll let God show me." 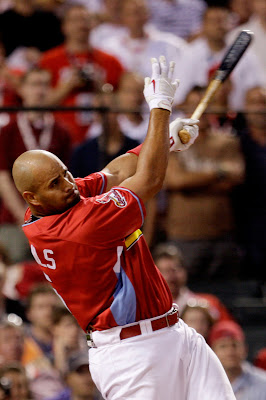 Pujols and the Cardinals have yet to open negotiations about a contract extension, but team owner Bill DeWitt says he hopes to begin talks this winter. For the Cardinals, time is running out.

"He knows we want him to be here, and we're going to make every effort to see that happen," DeWitt says.

Pujols is watching closely, trying to determine the Cardinals' plans. Will manager Tony La Russa, whom he adores, return? Will they be a big-time player in the free agent market? Or will they be content to keep their payroll below $100 million, leaving Pujols without adequate protection in the lineup?

"When you already made the money Albert has, you don't need to compromise," says Pujols' agent, Dan Lozano. "He is not going to chase the money. He wants to chase the rings."

The Cardinals, who haven't reached the playoffs since winning the World Series in 2006, enter the break in first. Yet there are fears of what will transpire in the second half. Pujols has been walked 71 times, including 32 intentionally, the most by any hitter outside Bonds since the stat became official in 1955.

It's this fear for Pujols, and the fact the cleanup hitters are batting .225 behind him, that could derail the season. It also could halt Pujols' bid to surpass Roger Maris' mark of 61 home runs, set in 1961. It since has been surpassed six times — all within a four-year period — and all by players linked to steroids. Pujols could become baseball's clean single-season home run king.

But Pujols doesn't need the record to help his legacy. "History will be the litmus test," Cardinals general manager John Mozeliak says. "If he continues like this and there are no blemishes, he will go down as one of the greatest, if not the greatest, in an era that has been questioned."

Related
LOPRESTI COLUMN: Is St. Louis really that baseball-crazy?
BASEBALL PARADISE? St. Louis gets All-Star nod from players
TWITTER Quick hits from the All-Star Game from the USA TODAY staff
Posted by jtf at 5:47 AM