The Little Sisters of Limousine Liberalism

How much is Sr. Carol Keehan worth to the pro-Obamacare Catholic Health Association? Answer: $962,467. 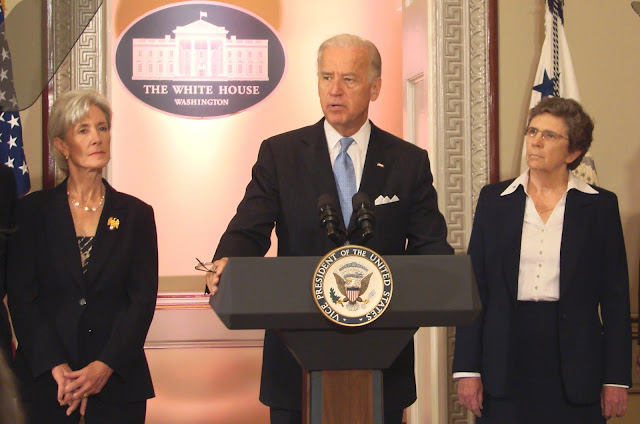 Sr. Carol Keehan, CHA president and CEO, (right) looks on as Vice President Joseph Biden speaks at a White House event on July 8, 2009 to announce an agreement between hospitals, Senate leaders and the Administration on health care reform. Health and Human Services Secretary Kathleen Sebelius (left) was also in attendance as were representatives of the American Hospital Association and the Federation of American Hospitals. (CHAUSA)


I called up the Catholic Health Association (CHA) yesterday. I wanted to nail down the exact compensation figures for some of its executives, including the salary and benefits of Sister Obamacare, also known as Daughter of Charity nun Carol Keehan, who last week helped Barack Obama engineer his latest con job -- the bogus conscience "compromise" designed to hoodwink Catholics into voting for his reelection.

As it has been widely reported, Obama conferred with Sister Keehan before his announcement last Friday. Then, lo and behold, she praised his revision as an inspiring resolution to the thorny issue of "religious freedom" soon after the sham event concluded.

So let's get down to brass tacks. How much is Sister Keehan worth for such political interventions? The checkered Catholic hospitals Keehan represents as chief executive officer of the Catholic Health Association stand to receive gobs and gobs of cash from the federal government if Obamacare holds up past 2012. Consequently, the members of the association are more than happy to pony up huge salaries to executives skilled at manipulating the Catholic electorate for Obama.

Keehan is worth $962,467 to them in total salary and benefits, according to the Schedule J (Form 990) 2010 document sent to me by CHA. Theoretically, this is paid to the nun's order, though CHA adds an intriguing caveat to its compensation figures:

The descriptions below provide an overview of the composition of the five compensation figure columns (B, C, D, E and F). Note that for Sisters Carol Keehan and Patricia Talone and for Father Tom Nairn, all amounts in column B, except for certain fringe benefits included in column (B)(iii), were paid to their respective orders.

It turns out that left-wing "Catholic Social Justice" is a good career move. Sister Talone, to which the caveat refers above, pulls down for the Sisters of Mercy "$416,623" in total compensation, while Fr. Nairn's order, the Franciscan Friars, snatched $194,947.

Who knew that lobbying for the corporal works of mercy paid so well? Of course, the dirty little secret of secularized "non-profit" Catholic hospitals is that they rake in enormous profits. Hence, some of its executives garner salaries/benefits north of $9 million. Obamacare will release another avalanche of federal government cash with which to feather their nests.

"For where your treasure is, your heart will be also," said Jesus Christ. A pedestrian reduction of the Son of God's saying is: Follow the money.

But say this at least for Sister Obamacare: she displays gumption that the waffling U.S. bishops lack. She still wears the pants in the clerical family.

She spun Obama's "compromise" effortlessly, while the United States Conference of Catholic Bishops (USCCB) was caught flatfooted. In his tiresomely inane and people-pleasing way, USCCB president Cardinal-designate Timothy Dolan initially praised Obama's con job as a first "step in the right direction." This gave the White House nearly a day of good publicity with which to confuse Catholics.

Later that Friday, the USCCB issued a new statement pronouncing Obama's revision "unacceptable." But the damage was already done.

Keehan must chuckle at the cluelessness and doctrinal timidity of the bishops. The USCCB still can't decide if "Catholic" pols whipping the Church in America on issues like abortion and gay marriage should be denied Communion. This is too tough a call for the USCCB, so no uniform policy exists. (In a typical comment from the USCCB crowd, Cardinal Donald Wuerl of Washington, D.C. has said that he won't withhold Communion from Nancy Pelosi, as that "style" of confrontation makes him uncomfortable.)

While the bishops dither, Keehan ruthlessly organizes the Little Sisters of Leftism for Obama's reelection. Her task is a little trickier this year but she could still pull it off.

In 2008, many bishops, priests, and nuns voted for Obama and they probably will again. At the end of the day, they are Democrats first and Catholics second. Besides, they agree with Obama on issues like birth control. They, too, view the Church's teachings as passé.

Indeed, Saul Alinsky couldn't have organized Obama's Fifth Column within the Church any better than Sister Keehan and company.

"Obama is not a pro-abortion president," Giovanni Maria Vian, editor of L'Osservatore Romano, said a while back, while former papal household theologian Cardinal Georges Cottier congratulated Obama for his "humble realism."

Catholic Washington Post columnist E.J. Dionne, who got Keehan's memo and is back on the team (not that he was ever off it) after Obama's "compromise," enjoys seeing traditional Catholics in America get their wires crossed with ostensible allies at the USCCB and Vatican. The "Vatican clearly views Obama through a broader prism," said Dionne after the remarks of Vian and Cottier.

Santa Fe Archbishop Michael Sheehan told the openly heretical National Catholic Reporter that he supported Notre Dame's decision to confer an honorary degree upon Barack Obama and could not understand the "big scene" of protests about it. Asked by NCR if other bishops agreed with him, he replied, "Of course, the majority."

He declared that "we don't want to isolate ourselves from the rest of America by our strong views on abortion and the other things."

The rise of the Tea Party frankly scares these bishops. Nervous headlines they didn't dare run in their diocesan newspapers after the election of Barack Obama suddenly appeared after the House Dems got clocked in November of 2010. Catholic San Francisco ran a headline after the election that read: "Social Justice Agenda in Jeopardy in US."

America magazine, the Jesuit journal of dissent, also found the Tea Party-inspired results troubling. Steve Schneck, director of the Institute for Policy Research & Catholic Studies at the Catholic University of America, wrote in a piece on its website that the Church's "years of efforts in America to support public policies that reflect its moral vision were dealt a blow Tuesday evening."

No doubt Obama will reassemble his "Catholic advisory committee" and continue to generate donations from Catholic colleges and universities. Last time around, the faculty at Jesuit Georgetown led all college faculties, religious and non-religious, in donations to Obama.

Several Jesuit schools joined Keehan in praising Obama for his HHS "compromise," which was awfully big of them since they never needed it in the first place, given that they already hand out condoms and contraceptives to their students.

Obama's 2008 Catholic advisory committee included such national co-chairs as Sr. Jamie Phelps, OP, professor of theology at Xavier University, and Sr. Catherine Pinkerton with the Congregation of St. Joseph. Surely, his 2012 one will be chaired by an even worthier champion -- Sister Keehan, the Daughter of Charity worth close to a million bucks a year.


- George Neumayr is a contributing editor to The American Spectator.
Posted by jtf at 9:34 AM