Have you heard about the Saudi journalist who faces a potential death sentence under sharia? 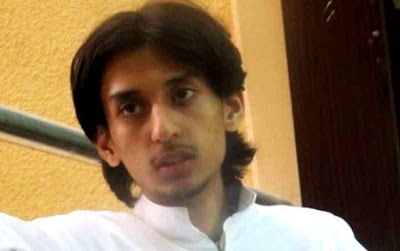 You probably haven’t, at least if you’ve been watching FoxNews.
Hamza Kashgari (pictured above), as Nina Shea and yours truly have noted in recent days, is a Saudi journalist and blogger who took the occasion of Mohammed’s birthday to tweet some uncomplimentary things about Islam’s founding prophet. The Daily Beast recounts the three offending tweets:

“On your birthday, I will say that I have loved the rebel in you, that you’ve always been a source of inspiration to me, and that I do not like the halos of divinity around you. I shall not pray for you,” he wrote in one tweet.
“On your birthday, I find you wherever I turn. I will say that I have loved aspects of you, hated others, and could not understand many more,” he wrote in a second.
“On your birthday, I shall not bow to you. I shall not kiss your hand. Rather, I shall shake it as equals do, and smile at you as you smile at me. I shall speak to you as a friend, no more,” he concluded in a third.
Doesn’t sound too terrible, especially if you compare it to the sort of things the Obama Left has been saying about faithful Christians. Yet, it is a profound sin under classical sharia law, which happens to be the law of Saudi Arabia. The 23-year-old’s tweets instantly touched off a firestorm. Kashgari desperately tried to delete the posts within six hours, but it was too late: the damage was done as Saudi clerics and thousands of Saudi citizens started baying for his blood.

Kashgari attempted to flee to New Zealand. But Saudi authorities issued a warrant for his arrest on blasphemy charges. In fact, the Daily Beast reports that the kingdom’s leading news site says the warrant was issued by King Abdullah himself. Reportedly with the assistance of Interpol, Kashgari was apprehended in Malaysia and swiftly extradited to Saudi Arabia. In an interview with the Daily Beast prior to his arrest, Kashgari explained, “I view my actions as part of a process toward freedom. I was demanding my right to practice the most basic human rights — freedom of expression and thought.” These rights may be unalienable in Western thought, but they are unrecognized in sharia. Kashgari could well be executed.

As I’ve related before, Reliance of the Traveller — A Classic Manual of Islamic Sacred Law, is an authoritative translation of sharia that has been endorsed by, among others, the Islamic Research Academy of al-Azhar University in Cairo (the ancient seat of Sunni jurisprudential scholarship) and the International Institute of Islamic Thought, an influential Muslim Brotherhood think-tank. The manual instructs that, under sharia, the penalty for apostasy from Islam is death. (See, e.g., Sec. o8.1, “When a person who has reached puberty and is sane voluntarily apostatizes from Islam, he deserves to be killed.) The apostasy section goes on to describe “Acts that Entail Leaving Islam” (Sec. o8.7), and these include, “to speak words that imply unbelief”; “to revile Allah or His messenger [viz., Mohammed]“; to mock or deny faith; or to deny “scholarly consensus.” In Islam, the consensus is that Mohammed is the perfect example whose life is to be emulated, not questioned or disparaged.

Mr. Kashgari’s tweets have thus placed him in grave peril under the Saudi sharia system. Given the palpable jeopardy this poses for free speech globally — particularly in light of Interpol’s reported involvement in issuing a “red notice” based on the Saudi blasphemy charge, and the Obama administration’s strange 2009 move to expand Interpol’s legal immunity (see here, here and here) — one would think his plight would be a big deal. But my friend Diana West has discovered that it is not a big deal on FoxNews. A word search for “Kashgari” on the Fox website turns up no hits.

As I mentioned a few weeks back, the number two shareholder at Fox (after NewsCorp) is Alwaleed bin Talal, a member of the Saudi royal family whose bottomless pockets back various American projects designed to cast sharia law in a favorable light — such as Islamic studies programs at Georgetown and Harvard. In 2006, Accuracy in Media reported that Prince bin Talal had pressured Fox into downplaying the Muslim role in rioting in France. And it just so happens that, late last year, bin Talal plunked down $300 million for a stake in Twitter, the social media service that published the tweets that have Mr. Kashgari in such dire straits.