Bruce Springsteen - The Boss is cross

When Bruce Springsteen has something to say, the world listens. A new album from the New Jersey giant, almost 40 years after his first, is still a huge deal - demonstrated by the three coaches waiting yesterday outside Sony Records' Paris headquarters to take journalists from as far afield as Denmark and Australia to a special listening event. Even next month's advance airing of Madonna's latest album will be more low-key than this. 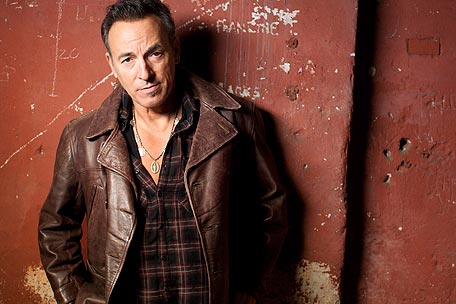 The gilded Théâtre Marigny, just off the Champs-Élysées, was the venue for the first European airing of Wrecking Ball, 62-year-old Springsteen's 17th album and his first to address America's current financial situation.

"You tend to do your best work when there's something you can really push against," he told the writers once the album's 11 tracks had played through.

Blasted loud in the darkness, with its cutting lines about bankers and fat cats displayed on a cinema screen, the songs broadcast a fury that showed him once again to be his country's musical conscience, the good angel perched on the shoulder of a conflicted nation that has seen better days.

The discussion (chaired, somewhat bizarrely to British eyes, by Antoine de Caunes of saucy Channel 4 show Eurotrash) moved quickly away from the music, which is as breast-beating and anthemic as we have come to expect, to the songwriter's views on everything from Barack Obama's achievements to last year's Norwegian massacre.

A political career would surely come naturally to this voice of the working people if he ever shaved off that silly miniature beard below his lip but Springsteen still professes to know his place: "I could never be a politician - I just don't have the skills. I have no interest in any other job."

Yet he voices the thoughts of the masses as adeptly as any professional speechwriter. He doesn't deny that there are big ideas behind his songs.

"My work has always been about judging the distance between reality and the American Dream," he says. "It's often claimed by different political groups because there is a strand of patriotism underneath but it's a critical, questioning, often angry form of patriotism."

That voice is heard most clearly on the new album's first single, We Take Care of Our Own. Over strident guitars and bold marching drums he repeats: "We take care of our own/Wherever this flag's flown".

Since its release last month its reception has recalled the confused response to Springsteen's biggest hit, Born in the USA - released in 1984 and famous for sounding like a rabble-rousing new national anthem to those who wilfully ignored the bitter lyrics about a soldier returning from Vietnam in the verses.

The LA Times has called the new song "an affirmation of national glory" but lines that explicitly reference the nation's slow response to Hurricane Katrina ("From the shotgun shack to the Super Dome/There ain't no help, the cavalry stayed home") suggest the opposite of taking care.

Springsteen clarifies from his stool on the stage: "The song asks the question that the rest of the record tries to answer which is, 'Do we?' - we often don't." He disputes the idea that songs such as this and Born in the USA, with a bright hummable tune and an apparently positive chorus, are open to misinterpretation. "I write carefully and precisely and I believe clearly. If you're missing it you're not quite thinking hard enough."

In any case, there's no mistaking the righteous ire in many of the album's other tracks. Shackled and Drawn has an upbeat and downhome feel but its toe-tapping sounds give false positivity to lines about "trudging through the dark in a world gone wrong".

It paints a picture of the working man versus the "gamblers", proclaiming: "It's still fat and easy up on banker's hill". On Jack of All Trades, a tale of an everyman figure adapting to survive, the simple piano melody and mournful horns give voice to a man who is both resigned and angry: "The banking man grows fat, working man grows thin/ It's all happened before and it'll happen again." He becomes more incensed as the song progresses: "If I had me a gun I'd find the bastards and shoot 'em on sight."

Death to my Hometown has a military feel, with its martial drum patterns and even bagpipes. It's as catchy as anything he's written and supremely uplifting, despite painting a picture of a town that's been ravaged even though there hasn't been a war. "They destroyed our families, factories, then they took our homes," Springsteen sings. "Send the robber barons straight to hell."

Perhaps he shies from a political career because he knows he doesn't have the answers, and he doesn't offer many here. But in Wrecking Ball's second half, what he does provide is hope - gallons of the stuff. The title track swells inspirationally, doubling the pace to a busy strum halfway through as the horns burst in. "Take your best shot, let me see what you've got," he urges in a song about rebuilding that could easily be addressing Obama himself.

By the time he gets to Rocky Ground he's using Biblical language over a church organ and gospel backing vocals: "Rise up, shepherd, rise up/Your flock has roamed far from the hill". Then there's Land of Hope and Dreams, an overwhelmingly rousing giant of a song that will work wonders when The E Street Band reaches Britain's football stadiums and festival fields this summer.

It roars into a vast chorus on a note of high optimism: "Leave behind your sorrows, let this day be the last/Tomorrow there'll be sunshine, and all this darkness past". It's the only song to feature the saxophone of Clarence Clemons, who died in June last year, and it's more than worthy of his mighty notes. "Losing Clarence was like losing something elemental. It was like losing air," Springsteen said.

Although The E Street Band are joining him on tour (with Clemons's nephew Jake handed the torch on saxophone duties) this is essentially a solo Springsteen record. A new producer, Ron Aniello, has pushed him into the occasional unusual corner.

"We used quite a lot of looping techniques," says Springsteen of the smatterings of electronic drums that dot the album. Keyboard atmospherics are often present and there's even a female voice rapping briefly on Rocky Ground. But he still begins writing every song on an acoustic guitar, so there's little here to frighten away long-term fans.

The closing track, We Are Alive, has a folksy feel reminiscent of his work with the Seeger Sessions band. Going one step beyond his being the voice of the people, it's sung from the perspective of the dead who have risen again.

That's a miracle way beyond this man who confesses to being steeped in Catholicism but it won't stop his followers from looking to him once again for something far more than catchy tunes. The People's President is addressing the nation again.