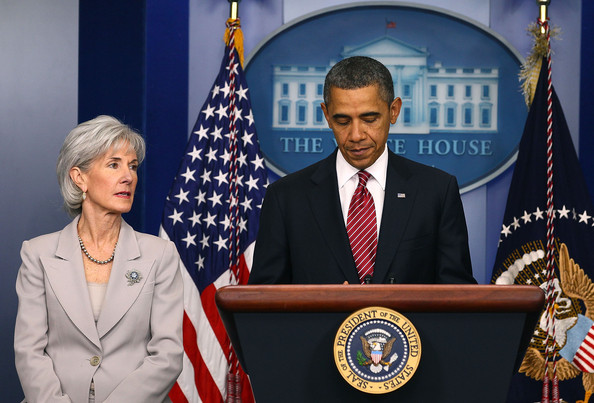 President Barack Obama is joined by Health and Human Services Secretary Kathleen Sebelius while making a statement in the briefing room at the White House on February 10, 2012 in Washington, DC. (February 9, 2012 - Photo by Mark Wilson/Getty Images North America)

One theory for why Barack Obama pushed the contraception mandate right now is that it helps Rick Santorum. Others theorize it's because Obama is an anti-religious bigot with a left-wing agenda. Reasonable minds can disagree on this.

This isn't a Catholic issue or even a religious issue. Conservatives are falling into the Democrats' trap by denouncing it as such. It's a freedom issue. (Or, as Democrats call it, "the F-word.")

If liberals like it, it's subsidized; if they don't, it's prohibited. And now they can impose their left-wing authoritarianism on the entire country by calling their mandates and prohibitions "insurance."

Screw you, liberals. I don't know why anyone needs an abortion, free contraception, crap-ass "art" with photos of vaginas on the Virgin Mary, non-farming farmers or a $1 million pension for Anthony Weiner.

But I'm forced to subsidize all of that.

And now we're all going to be forced to subsidize the entire wish list of the Berkeley City Council, recast as "health insurance."

Insurance is not supposed to be for normal expenses in the ordinary course of events, such as multivitamins, house painting or oil changes. Insurance is for unexpected catastrophes: fires, accidents, cancer.

So why is birth control covered by insurance? Birth control pills aren't that expensive -- generics are about $20 a month -- nor is the need for them a bolt out of the blue. Why not have health insurance cover manicures, back massages, carrot cake and nannies?

Liberals huffily ask why it's so important to the Catholic Church not to pay for insurance plans that cover birth control, but the better question is: Why is it so important to liberals to force them to? (Wait until they have to buy coverage for vibrating butt-plugs!)

The answer is: They want the government giving official sanction to birth control and, later, abortion. That comes next. They want it for same reason gays want gay marriage -- it's purely symbolic.

Following Betty Friedan, gender feminists believe the pill is so central to what we are as a nation that it must be paid for by all, i.e. by insurance. The argument for fully subsidized abortions will be: We don't vote on a basic human right!

Whether or not it's a "right," it's not an area for "insurance." Abortion is an elective procedure. No families are going bankrupt because they had to pay for an abortion -- which costs about as much as a haircut for John Edwards or Bill Clinton. Can't we limit the health insurance we are all required by federal law to purchase to financially ruinous, actual medical problems?

No, that is not in the cards. Just as liberals have turned the Constitution into a vehicle for achieving all the left-wing policies they could never get Americans to vote for, now they are going to use "insurance" for the same purpose. Their new method doesn't even require them to get votes from five justices on the Supreme Court.

The secretary of Health and Human Services, Kathleen Sebelius, will do it all on her own.

Anything close to the beating heart of feminism is about to become a mandatory part of insurance coverage: fertility treatments, chemical sensitivities, a year's leave of absence for fathers after the birth of a child, attention deficit disorder, massages, aromatherapy, watching MSNBC, sex change operations, gender reassignment surgery, gender re-reassignment surgery.

The contraception diktat is only the beginning of the government controlling your life under ObamaCare. There are approximately 100,000 more decisions the HHS Secretary will have to make under ObamaCare that you will not be able to appeal.

The bill should have been called "Kathleen Sebelius' Dream Journal."

As we have seen, Sebelius is not a go-with-the-flow kind of secretary. She is a doctrinaire feminist who thinks it's important to make a statement by ordering something that has only a tangential connection to health care but will have the effect of costing everyone more money.

Are you getting why this isn't a Catholic issue? So what if some "compromise" is reached that makes the Catholic bishops happy? They supported ObamaCare to begin with! They ought to be forced to live with the consequences of the totalitarian regime they helped foist on the rest of us.

Maybe they'll get a waiver from the contraception mandate on religious grounds -- just like unions and Obama-friendly corporations got waivers on the grounds that they realized ObamaCare would suck and they didn't want to be a part of it.

What about the rest of us? You know, the ones who didn't support ObamaCare? We still have to live under the thumb of a nutcase gender-feminist with unlimited authority to ban whatever she doesn't like, subsidize whatever she does like and call it "insurance."

If Obama is re-elected this November and ObamaCare is not repealed, Republicans' only option will be to make Rick Santorum the head of HHS under the next Republican president (if we ever have one).

He can prohibit insurance companies from covering anything related to contraception, AIDS and substance abuse, and mandate that insurance plans pay subsidies to stay-at-home mothers, tuition for home-schooled kids and cover the purchase of his book, "It Takes a Family."

Those particular lifestyle choices have as much to do with "insurance" as contraceptives do.