Yes, Violence Can be the Answer 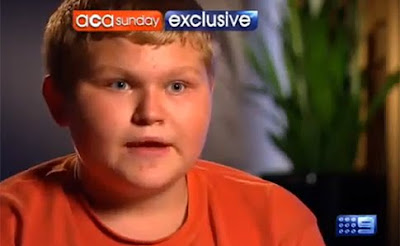 Casey Heynes says he exploded with anger after years of being tormented by bullies when he lashed out at 12-year-old who punched him several times.

It was the body slam heard around the world. When some Australian schoolboys decided to videotape themselves bullying 15-year old Casey Heynes, one of them got more than he bargained for. Casey, who had been pushed around and humiliated for years, responded to a punch in his face and other attempted blows by hoisting his tormentor WWE style and introducing him to the pavement. The result was a video that went viral in a way the bullies had never imagined and for a reason they certainly had never hoped: Casey has become a hero worldwide.

That is, a hero to everyone except the "experts." Ah, the experts, uncommon people you can rely on for all-too-common senselessness. As The Sydney Morning Herald writes[1]:

[P]olice and bullying experts are concerned by...the overwhelmingly positive reaction to the older boy's retaliation against his attacker.

"We don't believe that violence is ever the answer," Mr Dalgleish [John Dalgleish, head of research at Kids Helpline and Boys Town] says. "We believe there are other ways that children can manage this."

Yes, Casey could have done a ‘50s-style duck-and-cover. Hey, kid, don't you know you should just cower and curl up into a ball? And, for sure, violence is never the answer...except with the Nazis, Mussolini, and Napoleon; during the American Revolution, the Barbary Wars, and the Battle of Tours; and when stopping the criminals during the North Hollywood Shootout, University of Texas Tower Shooting, and incidents every single day in which someone, somewhere uses physical force to thwart a crime. It's never the answer -- except, sometimes, when you actually have to deal with reality.

It's hard to say what is more irritating about the "Violence is never the answer" nonsense, the stupidity or the insincerity of it. It's much like the mantra "Our strength lies in our diversity." It's something people say because it's a repeated big lie that has become "truth" and is politically correct; it's a reflexive platitude uttered politician-like because that's what "experts" are expected to say. But if Mr. Dalgleish's wife or child is attacked on the street, will he not find violence a very good answer?

The problem today is that we elevate experts above wise men. And one of the signs of a decaying civilization is when those in authority prescribe unrealistic rules for the population, rules that they themselves would never, and could never, follow. As to this, here is the rest of Dr. Bartell's advice: "...walk away, and go and find the principal, the guidance counselor, teacher and tell them what had just happened to him. Because those adults are really in a position to stop a child who is a bully...."

Again, this is ideology; it's what she learned to say in psychology class. And let's apply this to the adult world. If Mr. Dalgleish tried to "manage" an attack on his child by walking away and finding a police officer, the help he'd need might be in the area of forensic medicine. And even if he were alone, it's not always possible to walk away. This is why billions of dollars are made off self-defense classes.

Another bit of obligatory-utterance advice offered by psychologist Bartell is the nonsense that "those adults [school officials] are really in a position to stop a child who is a bully." What bunk. It's hard to even call these adults authority figures anymore, as handcuffed by the law and their own ideology as they are. These are people who think that "punishment" is a dirty word and a "time out" is enough to forestall dirty deeds. And, even insofar as they may possess a hidden firm hand, they're too shackled by education's "rules of engagement" and the fear of lawsuits to exercise it. Why do you think educators have, outrageously, sometimes responded to a bullied pupil by telling him to leave school? The truth is that the only time punishment doesn't fail to measure up to the behavior today is when a student violates a code of political correctness, such when a little boy doodles a gun on a piece of paper, gives a willing six-year-old girl a peck on the cheek or politely holds open a school door for an adult. As far as real transgressions go, however, it's see, hear and speak no evil; keep your head down; and punch the time clock.

And all you have to do is ask Casey. A nice, extremely articulate boy, as this interview shows[3], he had been bullied virtually every day for many years now. And where were the "adults"? Perhaps they didn't know -- and for sure they didn't act. Either way, they were incompetent and guilty of a grave sin of omission. And the kicker is that, after failing to secure a safe environment for their students, these educators turn around and tell the kids that they also may not save themselves. They'll say that "violence is never the answer" and then punish the victim the same as the victimizer. But would they want to be subject to the same standard? If they're assaulted on the street, perhaps they should go to prison for as long as the assailant. I mean, it takes two to tango, right?

And understand that this is the gun-control mentality, the mind-set that disempowers the people. It's much as during Hurricane Katrina. Like declawing a cat and then throwing him to the wolves, the New Orleans police confiscated weapons from law-abiding citizens while doing nothing about the roving gangs that would prey upon those citizens (hey, gangs might actually shoot back).

As for law enforcement, while I generally defend cops, they're much the same as school administrators. They make the same politically correct statements, such as saying they're "concerned" about the support for Casey's actions or responding to an obvious anti-white "hate crime" by claiming that they're unsure of the motive. They will tell citizens not to take matters into their own hands and instead call the proper authorities, yet, when people do the latter, they find that they sometimes end up like the gun-doodling little boy. (There recently was a New Jersey case in which a social worker called the police because she was worried that her son might be suicidal, and the man ended up being arrested and going to prison for possession of legally obtained firearms.)

So we're not supposed to take the law into our own hands even though, increasingly, the law isn't handling things. Students have to deal with do-nothing teachers and citizens with do-the-wrong-thing cops, and we're supposed to lay down our fists and arms and have confidence in the powers-that-be?

And this brings me back to violence never solving anything. If the Dalgleishes of the world really believed this, they would dissolve the military and trade the police for social workers. But it's not surprising that people famous for situational values (i.e., liberals) would also subscribe to situational pacifism. If a criminal resists arrest, they will expect the cops to use violence to apprehend him; moreover, they will actually relish it, I'm sure, if some miscreant is imperiling them. And this is fine. But here is what isn't fine: saying that what is often valid for people inside government is never valid for people outside government. Their real message is that violence is never the answer -- for the subjects. It's just peachy for the state, though.

And this way lies tyranny. There is a balance to things, and as citizen courage wanes government power inevitably waxes. G.K. Chesterton spoke of this phenomenon, writing, "[T]he Pretorian guard became more and more important in Rome as Rome became more and more luxurious and feeble. The military man gains the civil power in proportion as the civilian loses the military virtues." And when pondering this, I think of the parents who called the police to deal with an unruly prepubescent child. Like so many today, perhaps spanking was anathema to them as "violence is never the answer." But it was the answer. All their weakness did is ensure that the government would become the agent of it.

The reality is that, like amputation and many other unpleasant things, physical force has its place. After all, violence is not the best way to settle differences. Sometimes, however, it is the only way to prevent them from being settled for you.

Email ThisBlogThis!Share to TwitterShare to FacebookShare to Pinterest
Labels: Education, Media and Culture