Is it America’s duty to intervene wherever regime change is needed? 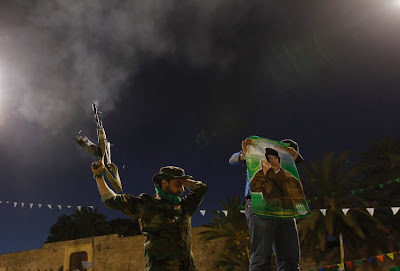 A Libyan army soldier loyal to Muommar Gadhafi fires shots in the air on Sunday as Western forces pound the country's air defenses and patrol its skies.(Reuters)

The missile strikes that inaugurated America’s latest attempt at regime change were launched 29 days before the 50th anniversary of another such — the Bay of Pigs of April 17, 1961. Then the hubris of American planners was proportional to their ignorance of everything relevant, from Cuban sentiment to Cuba’s geography. The fiasco was a singularly feckless investment of American power.

Does practice make perfect? In today’s episode, America has intervened in a civil war in a tribal society, the dynamics of which America does not understand. And America is supporting one faction, the nature of which it does not know. “We are standing with the people of Libya,” says Secretary of State Hillary Clinton, evidently confident that “the” people are a harmonious unit. Many in the media call Moammar Gaddafi’s opponents “freedom fighters,” and perhaps they are, but no one calling them that really knows how the insurgents regard one another, or understand freedom, or if freedom, however understood, is their priority.

But, then, knowing is rarely required in the regime-change business. The Weekly Standard, a magazine for regime-change enthusiasts, serenely says: “The Libyan state is a one-man operation. Eliminate that man and the whole edifice may come tumbling down.” And then good things must sprout? The late Donald Westlake gave one of his comic novels the mordant title “What’s the Worst That Could Happen?” People who do not find that darkly funny should not make foreign policy.

In Libya, mission creep began before the mission did. A no-fly zone would not accomplish what Barack Obama calls “a well-defined goal,” the “protection of civilians.” So the no-fly zone immediately became protection for aircraft conducting combat operations against Gaddafi’s ground forces.

America’s war aim is inseparable from — indeed, obviously is — destruction of that regime. So our purpose is to create a political vacuum, into which we hope — this is the “audacity of hope” as foreign policy — good things will spontaneously flow. But if Gaddafi cannot be beaten by the rebels, are we prepared to supply their military deficiencies? And if the decapitation of his regime produces what the removal of Saddam Hussein did — bloody chaos — what then are our responsibilities regarding the tribal vendettas we may have unleashed? How long are we prepared to police the partitioning of Libya?

Explaining his decision to wage war, Obama said Gaddafi has “lost the confidence of his own people and the legitimacy to lead.” Such meretricious boilerplate seems designed to anesthetize thought. When did Gaddafi lose his people’s confidence? When did he have legitimacy? American doctrine — check the Declaration of Independence — is that governments derive their just powers from the consent of the governed. So there are always many illegitimate governments. When is it America’s duty to scrub away these blemishes on the planet? Is there a limiting principle of humanitarian interventionism? If so, would Obama take a stab at stating it?

Congress’s power to declare war resembles a muscle that has atrophied from long abstention from proper exercise. This power was last exercised on June 5, 1942 (against Bulgaria, Romania and Hungary), almost 69 years, and many wars, ago. It thus may seem quaint, and certainly is quixotic, for Indiana’s Richard Lugar — ranking Republican on, and former chairman of, the Senate Foreign Relations Committee — to say, correctly, that Congress should debate and vote on this.

There are those who think that if the United Nations gives the United States permission to wage war, the Constitution becomes irrelevant. Let us find out who in Congress supports this proposition, which should be resoundingly refuted, particularly by Republicans currently insisting that government, and especially the executive, should be on a short constitutional leash. If all Republican presidential aspirants are supine in the face of unfettered presidential war-making and humanitarian interventionism, the Republican field is radically insufficient.

On Dec. 29, 1962, in Miami’s Orange Bowl, President John Kennedy, who ordered the Bay of Pigs invasion, addressed a rally of survivors and supporters of that exercise in regime change. Presented with the invasion brigade’s flag, Kennedy vowed, “I can assure you that this flag will be returned to this brigade in a free Havana.” Eleven months later, on Nov. 2, 1963, his administration was complicit in another attempt at violent regime change — the coup against, and murder of, South Vietnam’s President Ngo Dinh Diem. The Saigon regime was indeed changed, so perhaps this episode counts as a success, even if Saigon is now Ho Chi Minh City.

georgewill@washpost.com
Posted by jtf at 6:30 AM

Email ThisBlogThis!Share to TwitterShare to FacebookShare to Pinterest
Labels: George Will, Middle East