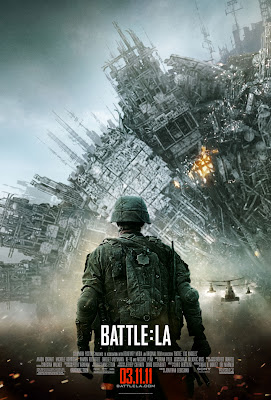 You want to know how clueless too many of today’s lock-step thinking, left-wing critics are? They’re so blinded by ideology and partisanship that their number-one complaint about the thoroughly entertaining, engrossing, exciting, edge-of-your-seat “Battle: Los Angeles,” is that it’s somehow lacking in important themes, subtext, a social conscience and meaning. Okay, it’s Lent and there’s a Swear Jar right here on my desk, which means that the following is going to cost me a dollar — but it’s worth it: Every word of that criticism is complete and utter bullshit. These critics and their many counterparts are either lying or they’re so blinded by partisanship that they can’t see the forest for the trees they’re hugging.

When The Washington Post talks about how the film isn’t “interested in allegory, nuance or social comment,” what they really mean is “left-wing allegory, nuance and social comment.” In other words, they want allusions to how George W. Bush is a war criminal. When the Leftists at Movieline declare the film “the emptiest form of sci-fi action,” they mean empty of the left-wing stuff that makes them wet — stuff about how Marines are jarhead racists and the aliens are really us, or something. When the New York Times laments a lack of “interesting political implications to chew over,” they mean left-wing political implications to chew over — like how man-made Global Warming means we deserve an alien invasion.

And finally, when Left-wing extremist Roger Ebert is made so upset by the film he declares those who disagree with his hit-job review ”idiots” and writes: “Its manufacture is a reflection of appalling cynicism” — well, to be honest, no one knows what the hell he’s talking about.

A film that gives us a ruthless enemy only interested in submission has plenty of allegory — what you might call a refreshing allegory. Not the kind of allegory left-wing critics like, but allegory nonetheless. The enemy we face now in the form of Islamists don’t want to talk, debate or discuss terms. They want us dead. All of us. Even Hollywood pansies who suck up to them in mega-flops.

You have to be a nitwit not to see the “social commentary” found in a story where liberal Los Angeles is invaded by this same enemy; where the city whose number-one industry relentlessly trashes the military can only be saved by a platoon of God-fearing, masculine, openly patriotic Marines. Even more delicious is that most of the action takes place in Santa Monica, a city more hostile to all-things American than any I have walked through. That’s not just “social commentary,” it’s deliciously subversive social commentary.

See 1 & 2 and then see the movie again without partisan blinders. This Marine platoon epitomizes the American ideal of e pluribus unum — “Out of many, one.” Most every race, creed and color is represented in this group of men and it’s never any kind of issue or even mentioned. These men are Americans and they don’t see each other as anything more or less. They are brothers brought together by the values they share in common. The evil of multiculturalism, the shallow differences the Left uses to divide us have no place among these brave Marines — including one who enlisted to earn his American citizenship. 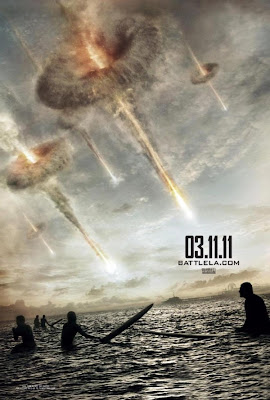 Of course the film is empty to the same Leftists who have turned nihilism into a theme and narcissism into a virtue. How could the mentally ill possibly recognize the rich thematic fullness and meaning found in a story that explores themes such as bravery, honor, valor, country, self-sacrifice, brotherhood, forgiveness, and what it means to be a man? Themes such as these are kryptonite to the Left and so their only defense is to make us feel uncool for being affected by them. That’s why instead of using the word “country” they use the word “jingosim.” “Valor” becomes “corny.” “Self-sacrifice” becomes “hokey. ” “Honor” is twisted into “old-fashioned.”

Let me put it this way: “Battle: Los Angeles” is the most subversive film to come out of Hollywood since “300.” It’s also not partisan or political in any way. We are watching a brutal alien invasion of Los Angeles from the point of view of a platoon of United States Marines — men who love their country, each other, and stand for the finest traditions and values America and our military has to offer. Director Jonathan Liebesman honors these men and writer Christopher Bertolini is true to them.

Better still, this is an absolutely terrific action film. The story grabs you within seconds and never lets go. The pacing is perfect, the plot is brilliantly simple, the actors are terrific, you care deeply for the characters, the action is gripping, and the special effects convincing. Best of all, there are a number of very moving scenes. In fact, the whole movie has a rich emotional undercurrent throughout because SSgt. Nantz (Aaron Eckhart) and his men are on a mission to rescue and protect civilians — they are doing what the U.S. Military always does, they are risking their own lives for people they’ve never met — they are running towards the danger as everyone else runs away.

The characters might be archetypes of an old WWII movie, but they’re archetypes for a reason — they work. The idea is to get to the action and in order to do so the characters have to be set up quickly and effectively. “Battle: Los Angeles” does this effortlessly and by the time the almost non-stop action begins, you worry about these men — mainly because they are men to be proud of. That doesn’t mean they don’t have a sense of humor or even that there isn’t some conflict between them. They’re flesh and blood, but at the same time, they represent the very best in us — something we should all aspire to.

My only complaint is the shaky-cam, but to be perfectly honest, the story was so engrossing I hardly noticed. And since it was Take Your Pretty Wife to Work Day, I can tell you that she can’t wait to see it again.

Yes, liberals, troop-bashers, aging hippies, above-it-all hipsters, America-haters, and sophisticated literary types should stay far away. Go watch “Green Zone” again. The rest of us need to get out there and see this. Not as some sort of political gesture – but because this is an exciting, moving, intelligently made actioner that ennobles the human spirit and the things we hold dear.

P.S. There is one moment that took me completely out of the movie. While running through Santa Monica, our heroes pass a store with a “Support the Troops” sign in the window next to an American flag. There’s no way you’d ever see such a thing in Santa Monica without the word “fascist” spray-painted across it. Aliens I buy, but that went too far.