For Coach Krzyzewski, It’s 900 and Counting 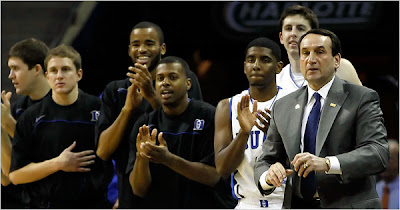 If Duke and Mike Krzyzewski can make it to a 12th Final Four together this weekend, he will tie Bob Knight in career victories, with 902. (Kevin C. Cox/Getty Images)

ANAHEIM, Calif. — After Duke secured career victory No. 900 for Coach Mike Krzyzewski last weekend, he took a moment to reflect. One. Then he boarded the team bus and watched the game that would decide his next N.C.A.A. tournament opponent.

Such is the Krzyzewski way: understated, methodical, consistent, the force behind 13 Atlantic Coast Conference tournament titles, 12 national coach of the year awards, 11 Final Four trips, 4 national championships and now, perhaps the most implausible milestone of all, 900 wins.

Yet when the moment came, Krzyzewski, 64, reflected on the people who made the number possible. Players. Assistants. Administrators. Bob Knight, his mentor. Knight was the first coach — and before Krzyzewski, the only Division I men’s coach — to reach 900 victories. That Krzyzewski, his former point guard, first matched that achievement seemed improbable, until now.

On his weekly SiriusXM radio show, Krzyzewski addressed Knight, said he loved him and admired him. “Yesterday is a day that will never happen again, for anybody, in the history of our game,” he added, referring to their shared accomplishments.

Knight retired with 902 wins, a number Krzyzewski could match with triumphs over Arizona on Thursday night here in the Round of 16 and in Saturday’s regional final. From Texas, Knight alternately pitched his prostate cancer awareness initiative — OnTheLine.com — and spun stories of Krzyzewski, before career victory No. 1.

When Knight recruited Krzyzewski to West Point in 1966, he asked Krzyzewski to reinvent himself from a high school guard who led his league in scoring to a defensive stopper and distributor. In all his years of coaching, Knight said, Krzyzewski made the greatest transformation of any single player.

“He became a totally different entity,” Knight said. “He was observant, and to this day, that’s one of his outstanding characteristics. It helped him do as good a job in college sports as anybody who ever coached anything.”

As Tom Butters watched No. 900, he thought back to 1980, when, as Duke athletic director, he phoned Knight looking for a coach. Knight rattled off three names, but Butters instead asked about Krzyzewski, winner of 73 games at Army but only nine the previous season.

Butters considered Krzyzewski the best young defensive coach in the country, cut from Knight’s prestigious cloth. Knight told him Krzyzewski possessed all his best coaching qualities, and none of his worst. That was 827 wins ago.

“I mean, 900 wins, it’s incredulous, a testament to the coach,” Butters said. “I remember those first three years at Duke. A lot of people didn’t think he’d reach 50 there.”

Johnny Dawkins and Jay Bilas saw the latest milestone in different states, but flashed back to the same place. Each graduated in 1986, as members of the recruiting class that turned Duke basketball into the current incarnation, a dominant, envied, in some quarters irritating, force.

Dawkins was the key recruit, and even though he described the choice as “easy,” his friends wondered why he did not choose a more established basketball program. In his freshman season, Bilas said, players heard calls for Krzyzewski to be fired. 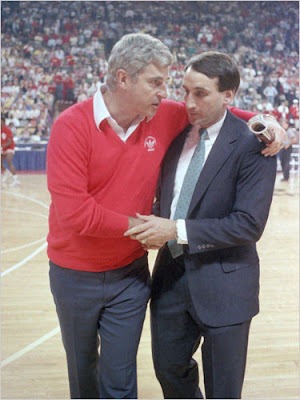 Then Duke started winning. It won the A.C.C. tournament in 1986 and reached the N.C.A.A. final, after Krzyzewski asked Knight to address his team before the tournament. Then came wins 200, 300, 400, one milestone bleeding into the next.

Bobby Hurley watched the 1986 team at the Meadowlands, saw Dawkins throw down a two-handed reverse dunk against Navy. Hurley thought, “Maybe I should go to Duke.”

Hurley arrived in 1989 and helped Krzyzewski capture his first two national titles, in 1991 and 1992. The speeches Krzyzewski delivered, the stories he relayed, gave Hurley chills. His favorite: Krzyzewski spoke of the pickpocket who went after his mother’s purse and how she chased him off. To Hurley, a presumed protector of the basketball, that story resonated.

“It’s amazing how many generations he navigated, how many players he reached,” said Hurley, now an assistant coach at Wagner. “We never thought about the numbers. That’s not how he operated.”

For the CBS analyst Bill Raftery, 900 prompted reminders of when he coached at Seton Hall and Krzyzewski coached at Army. Raftery always admired how Krzyzewski prepared for games, his concentration on the smallest details. But he never expected this.

Raftery was there in November 2000 when Krzyzewski notched his 500th win at Duke against Villanova. He said he thought, “Wow, 500, incredible.”

Krzyzewski added USA Basketball duties to his Duke responsibilities in 2005. The man who hired him, the USA Basketball chairman Jerry Colangelo, liked Krzyzewski’s military background and the Knight influence.

Colangelo heard from those who thought Krzyzewski had taken on too much, but he later insisted it made him a better coach. He learned offensive principles from N.B.A. coaches, borrowed drills, expanded the highest of basketball I.Q.’s.

Mike D’Antoni, the Knicks’ coach and an Olympic assistant, said Krzyzewski “is absolutely the best at creating an organization that pulls in the same direction,” while Chauncey Billups, a Knicks guard and an Olympian, described Krzyzewski as “probably the most passionate coach I’ve ever played for.”

This season, more than three decades into his Duke tenure, Krzyzewski has proved as adaptable as ever. He lost point guard Kyrie Irving for months to a toe injury, shifted Nolan Smith into that slot, coaxed an exceptional performance from Smith, and deftly worked Irving back into the rotation.

Irving made the decisive shot against Michigan for win No. 900. Krzyzewski drew the play up on the sideline.

In that game, Krzyzewski channeled his inner Knight. He screamed at his team during a timeout in the second half. He glared, teeth clenched.

Some of the things that he learned from Knight are showing up on branches of the Krzyzewski coaching tree.

“I find myself saying some of the same things he said to me as a player, or assistant,” said Dawkins, a longtime Duke assistant and now the head coach at Stanford. “I catch myself, and I laugh, like wow. I can’t believe it, but it kind of comes out that way. It shows you there will always be a connection forever.”

Should Krzyzewski advance to another title game, he will pass Knight this season. If not, he will secure the career victories record next season and stretch the total well into the future.

On the satellite radio show, Knight told Krzyzewski, “Before you get carried away now, let me tell you, in the great beyond, somewhere down the road, I’m coaching, and you’re playing, I’m still not going to let you shoot.”

“Coach,” Krzyzewski answered, “that’s why we won a lot of games.”

Indeed, from Knight to Krzyzewski to Bilas to Hurley to Smith and right on down the line. But Krzyzewski is not concerned with numbers, not 900, 902, 903, or even his 12th trip to the Final Four, which would tie John Wooden for the most in a career.

He reached 900 victories by focusing only on the next game. In this case, potential win No. 901.


Howard Beck and Jonathan Abrams contributed reporting from New York.
Posted by jtf at 7:01 AM