Obama and Libya: The professor’s war 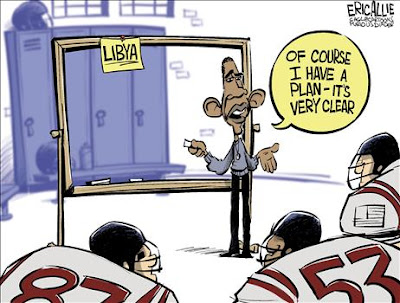 President Obama is proud of how he put together the Libyan operation. A model of international cooperation. All the necessary paperwork. Arab League backing. A Security Council resolution. (Everything but a resolution from the Congress of the United States, a minor inconvenience for a citizen of the world.) It’s war as designed by an Ivy League professor.

True, it took three weeks to put this together, during which time Moammar Gaddafi went from besieged, delusional (remember those youthful protesters on “hallucinogenic pills”) thug losing support by the hour — to resurgent tyrant who marshaled his forces, marched them to the gates of Benghazi and had the U.S. director of national intelligence predicting that “the regime will prevail.”

But what is military initiative and opportunity compared with paper?

Well, let’s see how that paper multilateralism is doing. The Arab League is already reversing itself, criticizing the use of force it had just authorized. Amr Moussa, secretary-general of the Arab League, is shocked — shocked! — to find that people are being killed by allied airstrikes. This reaction was dubbed mystifying by one commentator, apparently born yesterday and thus unaware that the Arab League has forever been a collection of cynical, warring, unreliable dictatorships of ever-shifting loyalties. A British soccer mob has more unity and moral purpose. Yet Obama deemed it a great diplomatic success that the league deigned to permit others to fight and die to save fellow Arabs for whom 19 of 21 Arab states have yet to lift a finger.

And what about that brilliant U.N. resolution?

China is calling for a cease-fire in place — which would completely undermine the allied effort by leaving Gaddafi in power, his people at his mercy and the country partitioned and condemned to ongoing civil war.

Brazil joined China in that call for a cease-fire. This just hours after Obama ended his fawning two-day Brazil visit. Another triumph of presidential personal diplomacy.

And how about NATO? Let’s see. As of this writing, Britain wanted the operation to be led by NATO. France adamantly disagreed, citing Arab sensibilities. Germany wanted no part of anything, going so far as to pull four of its ships from NATO command in the Mediterranean. Italy hinted it might deny the allies the use of its air bases if NATO can’t get its act together. France and Germany walked out of a NATO meeting on Monday, while Norway had planes in Crete ready to go but refused to let them fly until it had some idea who the hell is running the operation. And Turkey, whose prime minister four months ago proudly accepted the Gaddafi International Prize for Human Rights, has been particularly resistant to the Libya operation from the beginning.

And as for the United States, who knows what American policy is. Administration officials insist we are not trying to bring down Gaddafi, even as the president insists that he must go. Although on Tuesday Obama did add “unless he changes his approach.” Approach, mind you.

In any case, for Obama, military objectives take a back seat to diplomatic appearances. The president is obsessed with pretending that we are not running the operation — a dismaying expression of Obama’s view that his country is so tainted by its various sins that it lacks the moral legitimacy to . . . what? Save Third World people from massacre?

Obama seems equally obsessed with handing off the lead role. Hand off to whom? NATO? Quarreling amid Turkish resistance (see above), NATO still can’t agree on taking over command of the airstrike campaign, which is what has kept the Libyan rebels alive.

This confusion is purely the result of Obama’s decision to get America into the war and then immediately relinquish American command. Never modest about himself, Obama is supremely modest about his country. America should be merely “one of the partners among many,” he said Monday. No primus inter pares for him. Even the Clinton administration spoke of America as the indispensable nation. And it remains so. Yet at a time when the world is hungry for America to lead — no one has anything near our capabilities, experience and resources — America is led by a man determined that it should not.

A man who dithers over parchment. Who starts a war from which he wants out right away. Good God. If you go to take Vienna, take Vienna. If you’re not prepared to do so, better then to stay home and do nothing.

letters@charleskrauthammer.com
Posted by jtf at 6:28 AM