Tea Party animals not boiling over

Media portrayals of protesters as right-wing kooks are overheated. 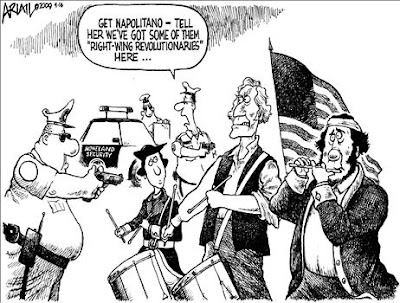 Our lesson today comes from the old British novelty song:

"I like A Nice Cup Of Tea in the morning

Just to start the day, you see

My idea of heaven

In other cultures, tea is a soothing beverage, a respite from the cares of the world. "A Nice Cup Of Tea And A Sit-Down" is a British best-seller offering advice on tea, biscuits (that's "cookies" in American) and comfy chairs by the husband-and-wife team of "Nicey" and "Wifey," which sobriquets suggest that these are not the folks to turn to for societal insurrection.

George Orwell – the George Orwell of "Animal Farm" and "1984" – wrote a famous essay called "A Nice Cup Of Tea," all about the best way to warm the pot, and the defects of shallow cups. Is it some sort of political allegory for impending civil war set in a household torn between those who put the milk in before the tea and those who do so after? No, Orwell liked a good cuppa (as they say in England) and was eager to pass on his advice for extracting maximum satisfaction from the experience.

But in America tea is not a soothing beverage to be served with McVitie's Digestive Biscuits. It's a raging stimulant. It's rabies in an Earl Grey bag. At America's tea parties, there's no McVitie's, just McVeighs – as in Timothy of that ilk, as in angry white men twitching to go nuts. To Paul Krugman of The New York Times, the tea party is a movement of "crazy people" manipulated by sinister "right-wing billionaires." To the briefly famous Susan Roesgen of CNN, the parties are not safe for "family viewing." Which is presumably why the Boston Globe forbore to cover them last week. The original Boston Tea Party was so-called because it took place at Boston Harbor, which I gather is a harbor somewhere in the general vicinity of the Greater Boston area. So there would appear to be what I believe the journalism professors call a "local angle" to Wednesday's re-enactment. Might be useful for a publication losing a million bucks a week and threatened with closure by a parent company that, in one of the worst media acquisitions of all time, paid over $1 billion for a property that barely a decade later is all but worthless.

But I digress. Asked about the tea parties, President Barack Obama responded that he was not aware of them. As Marie Antoinette said, "Let them drink Lapsang Souchong." His Imperial Majesty at Barackingham Palace having declined to acknowledge the tea parties, his courtiers at the Globe and elsewhere fell into line. Talk-show host Michael Graham spoke to one attendee at the 2009 Boston Tea Party who remarked of the press embargo: "If Obama had been the king of England, the Globe wouldn't have covered the American Revolution."

The American media, having run their own business into the ground, are certainly qualified to run everybody else's into the same abyss. Which is why they've decided that hundreds of thousands of citizens protesting taxes and out-of-control spending and government vaporization of Americans' wealth and their children's future is no story. Nothing to see here. As Nancy Pelosi says, it's AstroTurf – fake grass-roots, not the real thing.

Besides, what are these whiners so uptight about? CNN's Susan Roesgen interviewed a guy in the crowd and asked why he was here:

But Roesgen had heard enough: "What does this have to do with your taxes? Do you realize that you're eligible for a $400 credit?"

Had the Tea Party animal been as angry as these Angry White Men are supposed to be, he'd have said, "Oh, push off, you condescending tick. Taxes are a liberty issue. I don't want a $400 'credit' for agreeing to live my life in government-approved ways." Had he been of a more literary bent, he might have adapted Sir Thomas More's line from "A Man For All Seasons": "Why, Susan, it profits a man nothing to give his soul for the whole world … but for a $400 tax credit?"

But Roesgen wasn't done with her "You may already have won!" commercial:

"Did you know," she sneered, "that the state of Lincoln gets $50 billion out of this stimulus? That's $50 billion for this state, sir."

Really? Who knew it was that easy? $50 billion! Did those Navy SEALs find it just off the Somali coast in the wreckage of a pirate skiff in a half-submerged treasure chest, all in convertible pieces of eight or Zanzibari doubloons?

Or is it perhaps the case that that $50 billion has to be raised from the same limited pool of 300 million Americans and their as yet unborn descendants? And, if so, is giving it to "the state of Lincoln" – latterly, the state of Blagojevich – likely to be of much benefit to the citizens?

Amid his scattershot pronouncements on everything from global nuclear disarmament to high-speed rail, President Obama said something almost interesting the other day. Decrying a "monstrous tax code that is far too complicated for most Americans to understand," the Tax-Collector-in-Chief pledged: "I want every American to know that we will rewrite the tax code so that it puts your interests over any special interests."

That shouldn't be hard. A tax code that put my interests over any special interests would read: "How much did you earn last year? [Insert number here]thousand dollars? Hey, feel free to keep it. You know your interests better than we do!"

OK, to be less absolutist about it, my interests include finding a road at the end of my drive every morning, and modern equipment for the (volunteer) fire department and a functioning military to deter the many predators out there, and maybe one or two other things. But 95 percent of the rest is not just "special interests" but social engineering – a $400 tax credit for falling into line with Barack Obama and Susan Roesgen. That's why these are Tea Parties – because the heart of the matter is the same question posed two-and-a-third centuries ago: Are Americans subjects or citizens? If the latter, then a benign sovereign should not be determining "your interests" and then announcing that he's giving you a "tax credit" as your pocket money.

Doing the job the Boston Globe won't do, Glenn Reynolds, the Internet's Instapundit, has been posting many photographs of tea parties. For a movement of mean, angry old white men, there seem to be a lot of hot-looking young chicks among them. Perhaps they're just kinky gerontophiliacs. Or perhaps they understand that their generation will be the principal victim of this grotesque government profligacy. Like the original tea party, it is, in the end, about freedom. Live Tea or die!
Posted by jtf at 5:16 AM