There’s something troubling about an institution so immune to democratic control. 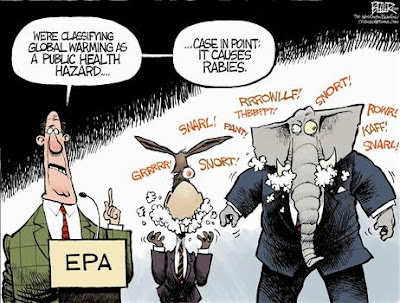 One of the most important events of our lifetimes may have just transpired. A federal agency has decided that it has the power to regulate everything, including the air you breathe.

Nominally, the Environmental Protection Agency’s announcement last Friday only applies to new-car emissions. But pretty much everyone agrees that the ruling opens the door to regulating, well, everything.

According to the EPA, greenhouse gases include carbon dioxide — the gas you exhale — as well as methane, nitrous oxide, hydrofluorocarbons, perfluorocarbons, and sulfur hexafluoride. It is literally impossible to imagine a significant economic or human activity that does not involve the production of one of these gases. Don’t think just of the gas and electricity bills. Cow flatulence is a serious concern of the EPA’s already. What next? Perhaps an EPA mandarin will pick up a copy of “The Greenpeace Guide to Environmentally Friendly Sex” and go after the root causes of global warming.

Whether or not global warming is a crisis that warrants immediate, drastic action (I don’t think it does), and whether or not such wholesale measures would be an economic calamity (they would be), the EPA’s decision should be disturbing to people who believe in democratic, constitutional government.

Two years ago, the Supreme Court — the least democratic branch of our formal government — decided in Massachusetts v. EPA that the agency could regulate greenhouse gases under the Clean Air Act. With this judicial green-light, the EPA has launched its power grab over all that burns, breathes, burps, flies, drives, and passes gas.

Yes, the head of the EPA reports to the president, which gives some patina of democratic accountability. Except the EPA is supposed to be politically autonomous, doing what it thinks best according to what President Obama calls “sound science.” So the government bureaucracy is on its way to strong-arming the economy in ways Congress never imagined when it passed the Clean Air Act in 1970. Or the president has suddenly gained sweeping new powers over American life, in ways never imagined by Congress or the founders, and despite the fact that these new powers were never put before the voters.

This is not a sudden development. Vast swaths of the state have been on autopilot for years, effectively immune to democratic influence. The Federal Reserve, particularly of late, has been acting like the fourth branch of government. Fed Chairman Ben Bernanke, without congressional, presidential, or court approval, has been committing trillions of dollars to fix the financial crisis. That may be warranted; only time will tell. But there’s still something troubling about an institution so immune to democratic control.

In 2002, Congress created the Public Company Accounting Oversight Board. It covers its expenses by taxing all publicly traded corporations. It alone determines the amount to tax, without approval of the White House or, more important, Congress, which, according to the Constitution, has the sole authority to levy taxes: “All bills for raising revenue shall originate in the House of Representatives” (Article 1, Section 7). In 1999, the Federal Communications Commission raised the so-called Gore tax on long-distance phone calls by 73 percent without seeking congressional approval. Lord knows what the EPA could collect by extorting “climate criminals.”

In fairness, the Obama administration and congressional Democrats reportedly don’t want to cede authority to the EPA. Rather, they want to use the threat of an EPA takeover — and its presumably draconian impositions on business — to force reluctant moderate Democratic and Republican members of Congress to sign on to the president’s cap-and-trade scheme (itself an enormous energy tax).

California’s Barbara Boxer, who chairs the Senate Environment and Public Works Committee, has said as much: “EPA, through its scientists, has given us a warning that global warming pollution is a clear, present, and future danger to America’s families. If Congress does not act to pass legislation, then I will call on the EPA to take all steps authorized by law to protect our families.”

Translation: Either you vote our way or we’ll render voting meaningless.

Other Democrats are delighted by the EPA decision because it allows them to have their preferred policy — carbon regulation — without actually having to vote for it.

Either way, it doesn’t sound like these folks take their oaths of office very seriously.

— Jonah Goldberg is editor-at-large of National Review Online and the author of Liberal Fascism: The Secret History of the American Left from Mussolini to the Politics of Meaning. © 2009 Tribune Media Services, Inc.
Posted by jtf at 8:13 AM