The Cross and the Powers

The Cross and the Powers

Today’s militant atheists claim that religion, Christianity in particular, has corrupted “everything.” Believers don’t think Christianity is the source of the world’s evil, but we are haunted by the sense that Christianity hasn’t done all that much good either.

Paul taught Christians to expect a lot from the gospel, politically as well as personally. He taught that the crucifixion of Jesus had a direct impact on the powers-that-be. He told the Colossians that Jesus went to the cross as the firstborn—the only-begotten of the Father, the new Israel, the heir, the Passover sacrifice—to pacify the powers. The same Son who created the powers (Col. 1:16) has “made peace through the blood of His cross” by reconciling powers in heaven and earth to Himself (Col. 1:20).

Paul borrows from the propaganda of the Roman Empire to make his point. According to Roman imperial ideology, the emperor was a cosmic “peace-maker,” bringing to earth an image of heavenly peace. The apostle says, on the contrary, that God has his own peace-maker, another Lord who reconciles all things. As Paul says later in Colossians, Jesus renovates all things and unites Greek and Jew, circumcised and uncircumcised, slave and free (Col. 3:10-11), extending his empire even to “barbarians” (Col. 3:10-11).

Scholars have debated inconclusively about whether the powers are angels or demons or social “forces” or human authorities, but in the end it doesn’t matter for Paul. If there are visible powers and authorities, the Son who made them subdues them (Col. 1:16). If there are invisible angelic or demonic powers, or more abstract forces in the human world, their fate is the same. The key thing for Paul is not to identify the powers, but to say that they have all been created and they have all been conquered. It’s a universal truth: Whatever rules over humanity has been tamed by the cross of Jesus.

Paul reiterates the same point in more extreme terms in the following chapter. Jesus, he claims, has “stripped” the rulers and authorities and made a public display of them (Col. 2:15). Paul is making an ironic reference to the actual event of Jesus’ crucifixion. If CNN had captured the crucifixion, the film clip would have shown Jesus Himself stripped, crucified naked and exposed. According to Paul, what actually happening was the opposite: Jesus stripped the powers. Paul again borrows from Roman imperial custom in saying that Jesus makes a “public display” of the powers, having triumphed over him in the cross.” By his death, Jesus leads the powers in a triumphal procession, displaying them as the trophies of his conquest, the plunder of Egypt.

For many believers, however, Christianity hasn’t lived up to the hype. British sociologist David Martin—a believer—has suggested that Christianity’s effect has been more modest. It is a Trojan Horse, sneaking incognito into the world and throwing “possibilities of a different order onto the screen.” Yet, Martin says, “what slips out of the Trojan Horse does not overturn the city and the powers-that-be.” It can disorient and disrupt by spreading “unsettling rumors,” but for Martin “there is no way it can abolish the ‘powers.’”

Skeptics seem to have all the facts on their side. Though the powers became Christian, Christian powers too frequently competed with their pagan predecessors in cruelty. The last century’s brutality was sufficient to force even jaded secularists to ponder the reality of the “demonic,” if not of demons. It won’t do for Christians to retreat into hazy spiritualizations; Paul said that Jesus came to pacify powers on earth as well as in heaven. From all the empirical data, it seems that he has failed rather miserably. Powers march on pretty much as they always have. Paul seems to have oversold the gospel’s efficacy.

I’d like to think that Paul knew what he was about, and that the cross did just what Paul said it did. But we need to try to penetrate Paul’s political theology of the cross in more detail to see how.

Let’s start with Paul’s notion that the cross “stripped” the powers. How did Jesus do that? Since Virgil celebrated the Augustan age, Rome proudly portrayed itself an instrument of universal peace. It stood for law and for justice. The trial and death of Jesus, however, placed a huge and permanent question mark over Roman justice. Three times in John’s account of Jesus’ trial, the Roman governor Pilate declared Jesus innocent. Pressured by Jews clamoring for Jesus’ blood, fearing that he would offend Caesar if he refused to punish a Jew who called himself a king, weary of trying to control the chaos of Judea, Pilate sent Jesus to death. When push came to shove, Roman justice was just another form of antique scapegoating, willing to condemn the innocent to restore or keep order. Centuries later, Augustine recognized that the cross had exposed the secret instinct behind the Roman empire, Roman law, Roman justice—the libido dominandi, the lust for domination. 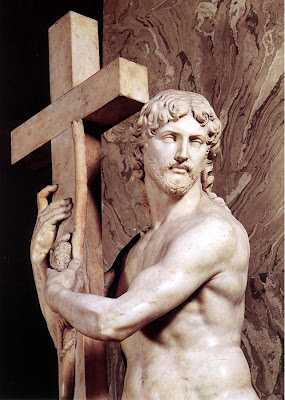 In stripping the powers of their rhetorical camouflage, the cross also exposes the powers to be, as Paul describes them elsewhere, “not-gods” (Gal. 4:8). For us moderns, power has been so thoroughly de-mystified that we barely see the point. Ancient peoples, including the citizens of first-century Rome, would have recognized the radical character of Paul’s assertion. Rulers had claimed divine status from the beginning of time. Pharaohs were the incarnation of Horus, kings of tiny city-states claimed divine descent, the Roman emperors justified their tyranny by portraying themselves as sons of Jove. According to Paul, Jesus’ cross shows that these claims are without foundation. Thinking themselves gods, they could not tolerate a Jesus who himself claimed to be God. Once he said “I am,” he became a rival, and one man had to die for the people. When the true “firstborn” appeared on the scene, he punctured the pretense of the not-gods.

Drawing on the exodus narrative, Paul claims that through the death and resurrection of the Son, God “delivered us from the domain of darkness and transferred us to the kingdom of his beloved Son” (Col. 1:13). Jesus is himself the dying Passover lamb, the true Israel that crosses through death to life, and, as the head of his body, he leads the Church through the sea into a new land. In other words, Jesus not only exposes the powers, but forms a community liberated from the powers. Not only the cross, but the sheer fact of the Church, Paul thinks, is evidence that the powers have been dethroned.

This means, at least, that the Church is free of the delusions of political messianism. If everyone knows that Joe Biden is joking when he says that Obama thinks Easter “is about him,” it’s because we live on the far side of the cross. Paul also means that through the cross the Church is delivered from everything else that dominates and distorts human life. The true man Jesus redeems slaves to tradition, slaves to blood and nation, slaves to fashion, slaves to public opinion, and forms a community of free citizens, of truly human humans. If the Church has often bowed to the idols of nationalism, traditionalism, or trendiness, it is because we have too often forgotten our exodus and returned to Egypt.

Powers don’t enjoy being exposed as frauds, and so the Church, like Jesus, has often provoked vicious opposition. But the effort of the powers to shore up their position is hopeless. The worse they can do is kill Christians, but that just means the cross gets repeated over and over, repeatedly revealing the iron fist beneath the velvet glove. Against a cruciform Church, the powers are helpless as babes.

Theologians like John Howard Yoder and Walter Wink who highlight Paul’s teaching on the powers often see Paul’s teaching as almost exclusively a matter of critique and unmasking. The powers are demonic, and the Church’s job is to keep subverting the powers, whatever form those powers take. Paul comes off as the apostle of continuous revolution.

As G. B. Caird pointed out in his little book on the powers, however, it’s important to see that Paul not only talks here about defeated powers, but also talks about “reconciled” and “pacified” powers (Col. 1:20). Through the cross, what rules the world is not only exposed as not-god; and also, through the blood of the same cross, powers begin to be reconciled to Jesus. Convinced though he was of human sin, Paul was not a pessimistic. He believed that powers can be turned to become instruments of the reign of Jesus. Through the cross, we know that nations are not divine, but through the cross nations can (and have) become Christian. Traditions can be tyrannical, and we need the cross to liberate us from traditions that claim divine authority; but traditions can too be reconciled to God. Popular opinion can enslave us, but popular opinion can be pacified by the cross. Doubters should spend some time with David Bentley Hart’s recent Atheist Delusions, recently reviewed on this site. Hart is no Pollyanna, but he shows in erudite detail how Christianity injected “an entirely new universe of human possibilities, moral, social, intellectual, cultural religious” into the world.

Caird captures the apostolic optimism when he says that Paul expected, “by the continued influence of Christ, working through his loyal followers in the Church, the state itself may be brought progressively more and more within the Christian dispensation, and the affairs of state directed not merely by the ethics of law but by the ethics of the Gospel.” For Paul, the Trojan Horse of the Church does more than spread subversive rumors. It conceals an Odysseus, a man of twists and turns, a suffering hero armed only with a cross, engaged in the long, often imperceptible work of taking the human city.

Peter J. Leithart is Senior Fellow of Theology and Literature at New St. Andrews College in Moscow, Idaho, and pastor of Trinity Reformed Church in Moscow.
Posted by jtf at 9:31 AM