Doing Business with the Jihad

An Iranian newspaper has reported that four American banks have issued formal requests to the Central Bank of Iran to open branches in Iran. Citibank, Goldman Sachs and two others left unnamed plan, according to the report, to establish temporary branches in an Iranian free trade zone if their requests are approved. The newspaper Jaam-e-Jam quoted an unnamed source explaining: “If they can work according to Iran’s banking law, they will be allowed to open branches in Tehran and other cities.” 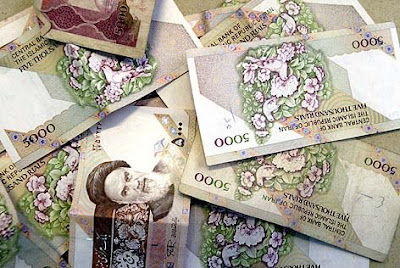 Is this where the bailout money is going?

It is curious that American banks -- which probably wouldn’t still be in business but for the taxpayers’ largess -- would want to do business in a country where the government holds military parades featuring banners proclaiming “Death to America” and whose President has declared: “I say accomplishment of a world without America and Israel is both possible and feasible.”

It is just as ominous in the long term that the banks would apparently be willing to “work according to Iran’s banking law.” So in other words, Western banks operating in Islamic countries have to abide by Sharia Finance restrictions. And meanwhile, Western banks operating in Western countries likewise are increasingly accommodating Sharia Finance restrictions.

The most notorious example of accommodation to Islam is the increasing popularity of Sharia Finance, which Western banking institutions are rushing to offer to Muslims in the West even more quickly than they are rushing to open branches in the Islamic Republic of Iran.

There is, after all, so very much money to be made. Najib Fayyad of Unicorn Capital Turkey explains: “There are Islamic finance institutions operating in over 75 countries and with assets estimated at around US$700 billion, a figure which is growing at a rate of about 15% a year.” Some of the West’s leading financial institutions, including (besides Citibank and Goldman Sachs) Barclays, Credit Suisse, Deutsche Bank, Dow Jones, HSBC Bank, Lloyd’s, Merrill Lynch, Morgan Stanley, and Standard & Poors, have created “Sharia Advisory Boards,” staffed with Islamic clerics and scholars, in order to help them bring their financial practices into line with Islamic norms.

A benign exercise in multiculturalism? Not quite. Christopher Holton, Vice President of the Center for Security Policy, states that “America is losing the financial war on terror because Wall Street is embracing a subversive enemy ideology on one hand and providing corporate life support to state sponsors of terrorism on the other hand.”

He illustrates the absurdity of this with a trenchant analogy: “Imagine that it is 1943 and titans of Wall Street are promoting something called ‘Shinto Finance,’ based on the Japanese theopolitical doctrine, while at the same time, they invest American dollars in foreign companies with active business ties to Imperial Japan.”

What’s more, Sharia Finance is another tool of Islamic separatism: instead of assimilating into American society, Muslims are demanding, and receiving, parallel financial institutions that reinforce the idea that they are unique, not subject to the laws and norms to which the rest of us are subject -- a privileged class. At the same time, Sharia Finance initiatives are giving Islamic interests increasing control over Western economic life.

In April 2008, journalists Alyssa A. Lappen and Rachel Ehrenfeld warned that “the growing U.S. and European financial crisis gives Islamic banking and shari’a finance proponents increasing leverage over Western markets and economics. In reality, their acquisitions of ever-larger stakes in U.S. and Western strategic financial and other assets, amounts to economic warfare against the West.”

The multiculturalist anxiety to accommodate Muslim principles and practices only makes Westerners even more vulnerable. Yet instead of engaging in careful strategic planning of both domestic and international initiatives, Citibank, Goldman Sachs and two other American financial institutions are working on opening branches in a country that has considered itself at war with the United States for thirty years.

It is a test of Congressional resolve to regulate financial institutions. Will they allow the banks which American money has just saved to establish branches in a state sponsor of terrorism?

Mr. Spencer is director of Jihad Watch and author of "The Politically Incorrect Guide to Islam (and the Crusades)", "The Truth About Muhammad," and "Stealth Jihad" (all from Regnery -- a HUMAN EVENTS sister company).
Posted by jtf at 9:48 AM

Email ThisBlogThis!Share to TwitterShare to FacebookShare to Pinterest
Labels: Economics, Islam and The West, Robert Spencer