Yanks have old Jeter, not Jeter of old

In summoning their captain too hastily, Bombers forgot Derek is 39 now -- not 29

NEW YORK -- Derek Jeter as the DH in the Bronx rather than as the DH in Moosic, Pa., made all the sense in the world to Jeter, to Brian Cashman, to Joe Girardi. Why have the captain of the New York Yankees play one side of the ball for the Scranton/Wilkes-Barre RailRiders when he could do the same for the big boys?

Especially when the big boys are a half-dozen games behind the Red Sox.
They all got carried away, the captain, the manager and the executive. They forgot that Jeter is 39 years old, that 39-year-old ballplayers aren't supposed to play seven innings of a Triple-A game, field unexpected news at 11:30 p.m., travel 125 miles in the dead of night and rise at 6:30 a.m. after a couple of hours of fitful sleep to play a big league game for the first time in nine months.
They all wanted and needed Derek Jeter to be Derek Jeter again, the Yankee whose pain threshold and ability to answer the bell reminded Gene Monahan, a team trainer for nearly half a century, of Thurman Munson's.
[+] Enlarge 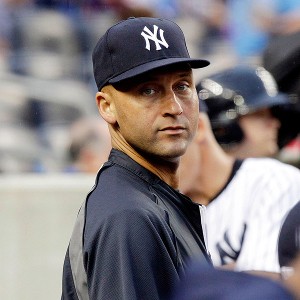 William Perlman/THE STAR-LEDGER/USA TODAY SportsDerek Jeter was rushed back to the Bronx -- which ended up costing the Yankees.
So that's why Jeter was promoted a day and change ahead of schedule. That's why he never played a full nine innings with the RailRiders before showing up in the Bronx for the first time since he fractured his ankle last fall, this after the Yanks had planned for Jeter to go nine in back-to-back Triple-A games.
That's why Jeter's comeback was declared one-and-done Friday, suspended on account of a Grade 1 strain of the shortstop's quad. That's why Jeter is more likely than not to end up back on the disabled list before he ends up back on the field.
Cashman and Girardi summoned a 29-year-old Jeter from the minors and got the 39-year-old version instead.
They didn't want to admit that this was about age and that an athletic, middle-of-his-prime Jeter wouldn't have pulled up lame against Kansas City after gunning it down the line for a couple of slow infield rollers.
Cashman and Girardi know how sensitive Jeter is about everything, never mind his advanced ballplayer age.
So this is what Girardi said when asked whether he's concerned that a physically vulnerable Jeter is the one he'll have to manage for as long as the captain plays:
"I hadn't thought about that. I figured he'd come back and, yeah, I'd have to spell him here and there like I did last year, and have to be smart about it. But I didn't expect this to happen. ... I think this will heal fine and he will be fine, but I don't think it's a guy that you can run out there 40, 50 days in a row like you used to."
So this is what Cashman said when asked whether Jeter's latest injury was a simple case of an athlete losing the inevitable lost-cause battle to gravity and time:
"I don't want to say 39 [years old] as much as he's coming off a broken foot, a twice-broken foot, so stuff can happen. ... I don't want to say it's Father Time knocking on his door and reminding him as much as listen, he really is coming back from something pretty significant, and the kinetic chain can tell you if everything's not in line, it makes you more susceptible, especially when you ask for that extra from your tank. And when he asked for that extra there, if he's not 100 percent in line for a period of time, then something's going to give."
Cashman and Girardi want to blame the fractured ankle and want to embrace the notion that athletes of all ages could suffer a setback or two when returning from an injury so severe. Jeter wants to embrace the notion that his ankle snapped in the 12th inning of Game 1 of the Detroit sweep not because he was 38, but because he kept playing through a bone bruise.

The Captain In Photos

Vote
Only there's no separating the player's injury from the player's birth certificate. Jeter surely had a bum ankle in the first place because his body could no longer manage the wear and tear of an endless season like it could in the past. The missed target date of an Opening Day return, and the second fracture discovered in April, and the quad strain suffered on the same day Eduardo Nunez, a 26-year-old shortstop recently activated from the DL, legged out his own infield hit without incident, all speak to a future first-ballot Hall of Famer compromised by age.
It happens to the best of 'em in the Bronx, from Joe D. to the Mick to the shortstop who will finish his career with 1,000-plus hits more than both.
"It's frustrating," Jeter said in his Friday statement. "I don't know what else you want me to say. I worked hard to get to the point of rejoining the team yesterday. It's not how you draw it up, but hopefully I'll be back out there soon and help this team win some games."
The other day, I wrote that with a severely diminished Alex Rodriguez facing suspension, and that with Mark Teixeira out for the season and Curtis Granderson out for who knows how long, the Yankees needed Jeter like never before. I wrote that their nearly unwatchable offense needed 75 percent of the 2012 Jeter, the guy who led the American League in hits with 216.
Now the Yanks again must get by with zero percent of that guy. Cashman conceded that a return trip to the DL is just as likely as a return trip to Fenway Park next weekend, after the All-Star break, and his manager called the Jeter-to-the-DL scenario "possible."
You don't need to be an every-day observer of Girardi to understand why this qualified as the day's most revealing comment. The manager almost never notarizes negative hypotheticals by calling them "possible."
If Jeter were 26, like Nunez, he'd stand a far better chance of staying on the field. "It becomes difficult," Girardi, the old catcher, said of ballplayers growing old. He recounted his own back issues that forced him out of the game.
"It's difficult because your mind tells you that you can still do it every day," the manager said. "That's the hard part of dealing with it."

Want to get the scoop on everything in pinstripes? ESPNNewYork.com has you covered. Blog
Now Girardi has to deal with it from the employer side, same as Cashman. The GM thought Thursday's DH-only role would be a "safe harbor" after Jeter told him, "I'm ready, I'm ready," in their late-night phone call and after Yankees evaluators in the stands reported the captain looked good on the run.
But the Yankees paid a price for shortcutting their original plan, and Cashman did the right thing in taking the hit for it, calling the fallout "my responsibility" and reminding himself in a room full of reporters that "you go through the process for a reason."
Now there's a new process to respect, as Friday's turn of events made it official: The Yankees are now dealing with the old Jeter, not the Jeter of old. This isn't the shortstop who had a bad year and a half in 2010 and 2011 while the pressures of an expiring contract and an approaching 3,000-hit milestone wore him down.
This is the shortstop who has entered the final stage of his career, the stage defined by what will be his greatest every-day challenge: staying healthy.
That doesn't mean Jeter can't lead a late-summer drive to his 17th playoff appearance in 18 seasons or that retirement should be seriously considered four months after he blows out the 40 candles on his cake next June.
It means he needs more rest, more protection, more days at DH. It means no rushing him back to Fenway if a total reboot and, say, an Aug. 1 comeback and a two-month regular season make more sense.
More than anything, it means the Yankees have to be smarter with Derek Jeter than they were this week.
Posted by jtf at 5:45 AM