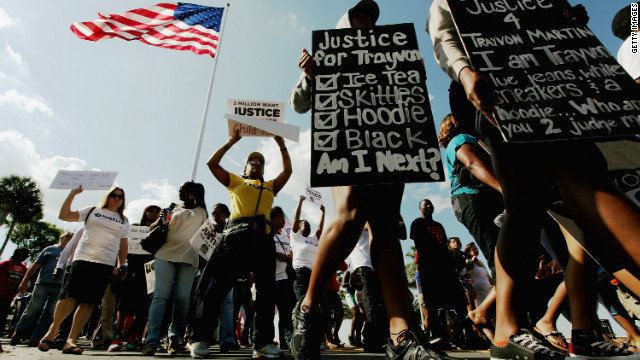 Trayvon Martin supporters march through downtown Sanford, Florida, on Monday, March 26, before the start of a town hall meeting about Martin's death. (CNN)
Judicial Watch announced today that it has obtained documents proving that the Department of Justice played a major behind-the-scenes role in organizing protests against George Zimmerman. Zimmerman is on trial for second-degree murder in the shooting death of Trayvon Martin in February 2012.

Judicial Watch filed a Freedom of Information Act request with the DOJ on April 24, 2012. According to the documents JW received, a little-known DOJ unit called the Community Relations Service deployed to Sanford, FL, to organize and manage rallies against Zimmerman.
Among JW’s findings:
JW says the documents it obtained reveal that CRS is not engaging in its stated mission of conducting “impartial mediation practices and conflict resolution,” but instead engaged on the side of the anti-Zimmerman protesters.


On April 15, 2012, during the height of the protests, the Orlando Sentinel reported, “They [the CRS] helped set up a meeting between the local NAACP and elected officials that led to the temporary resignation of police Chief Bill Lee according to Turner Clayton, Seminole County chapter president of the National Association for the Advancement of Colored People.” The paper quoted the Rev. Valarie Houston, pastor of Allen Chapel AME Church, a focal point for protestors, as saying “They were there for us,” after a March 20 meeting with CRS agents.

Separately, in response to a Florida Sunshine Law request to the City of Sanford, Judicial Watch also obtained an audio recording of a “community meeting” held at Second Shiloh Missionary Baptist Church in Sanford on April 19, 2012. The meeting, which led to the ouster of Sanford’s Police Chief Bill Lee, was scheduled after a group of college students calling themselves the “Dream Defenders” barricaded the entrance to the police department demanding Lee be fired.  According to the Orlando Sentinel, DOJ employees with the CRS had arranged a 40-mile police escort for the students from Daytona Beach to Sanford.

“These documents detail the extraordinary intervention by the Justice Department in the pressure campaign leading to the prosecution of George Zimmerman,” said Judicial Watch President Tom Fitton. “My guess is that most Americans would rightly object to taxpayers paying government employees to help organize racially-charged demonstrations.”

Organizing such protests falls well within both President Barack Obama’s and Attorney General Eric Holder’s wheelhouses. Obama was a “community organizer” in his career prior to elective politics, a position that uses protests and street theater, along with threats, to obtain concessions from businesses and other political opponents. Holder has accused America of being a “nation of cowards” for not discussing racial issues enough. He also described black Americans as “my people” during a congressional hearing.

As the Zimmerman trial winds down, the threat of race riots should he be acquitted has risen.

Revealed: How taxpayers paid for Justice Department unit to 'support protests after killing of Trayvon Martin' -