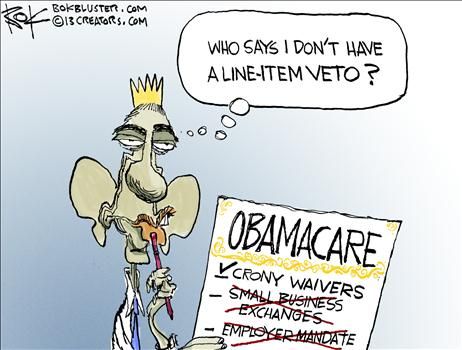 The conventional wisdom evolves. Yesterday, Washington was merely broken, gridlocked, dysfunctional. The passive voice spread the blame evenly. Today it’s agreed that Republican obstructionism is the root of all evil — GOP resistance having now escalated to nihilism and indeed sabotage.
Sabotage carries a fine whiff of extralegal, anti-constitutional vandalism. This from media mandarins who barely bat an eyelash when President Obama unilaterally suspends parts of his own health-care law — just as he unilaterally stopped enforcing current immigration laws for 1.7 million young illegal immigrants, thereby enacting by executive order legislation that had failed in Congress. So much for faithfully executing the laws (Article II).
The new CW knowingly deplores the 113th Congress for having passed the fewest pieces of legislation in at least four decades. Why, they were sneering, it couldn’t even pass the farm bill, the essence of bipartisanship for oh so many years.
Which is the perfect example of the fatuousness of measuring legislative success by volume, as if every new law represents an advance of civilization. The farm bill is the quintessence of congressional logrolling, trade-offs and kickbacks — in which the public interest is systematically trumped by some moneyed and entrenched special interest. Its death (lamentably temporary — it was partly resurrected on Thursday) was well-deserved.
Opposition to Obama’s entitlement-state agenda — beginning with Obamacare, long before it began falling apart before our eyes — should be a source of pride for Republicans. Nevertheless, they shouldn’t stop there. They should advance a reform agenda of their own.
The major thrust should be tax reform. The time could not be more ripe. The public is understandably agitated by an IRS scandal that showed not just the agency’s usual arrogance and highhandedness but also its talent for waste, abuse, corruption and an overt favoritism that even Obama called outrageous.
Support for tax reform is already bipartisan. Its chief advocates are Democrat Max Baucus and Republican Dave Camp, respectively Senate and House chairs of the tax-writing committees. Their objective is the replication of President Reagan’s 1986 bipartisan tax-reform triumph: closing loopholes and using that revenue to lower rates across the board, which helped propel two decades of near-uninterrupted economic growth.
Tax reform is the ultimate win-win. It levels the playing field by removing the advantage of lawyered, lobbied interests. It eliminates myriad distortions in capital allocation and lowers marginal rates — both of which spur economic growth. And it simplifies the code, thereby reducing the arbitrary and unaccountable discretion of IRS bureaucrats.
The House Republicans are preparing a 25 percent cut in the IRS budget. This is silly and small. It will change nothing. Radical simplification of the tax code will change everything.
Second, take a clear position on immigration reform. “Comprehensive” or piecemeal matters not. What matters is to stick to the essential principle: legalization in return for real border control — so that this is the last amnesty we will have to grant.
Any law containing both deserves support. The current Senate bill does not. Setting soft goals for border enforcement is an invitation to this and future administrations to fudge and fake.
Be clear. Be principled. Be unafraid. The country wants legalization and border control. Show that only the GOP is fighting for both.
Third, on the policy front, demand from the president a clear policy on Afghanistan. After highly acrimonious exchanges with President Hamid Karzai, Obama is openly considering a complete pullout next year.
U.S. national interests cannot hinge on personal pique. Karzai is both deeply unreliable and terminally ungrateful. But he will be gone one day, as will Obama. The terrorist breeding/training grounds of Afghanistan and Pakistan will remain.
For four years, the president argued that our strategic interests require a residual presence in Afghanistan in order to prevent a re-establishment of terrorist safe havens in the region.
Does he still believe this? After all that price in blood, two-thirds of it under Obama, is he going to leave an anti-terror force behind? Enough with the agonized ambivalence. Obama must be made to argue the case one way or the other.
It’s a modest agenda, although true tax reform would be an achievement of historic dimensions. But it should by no means diminish rigorous GOP efforts to stop an Obama program that aggrandizes government in every sphere (education, health care, energy, finance) and passes monstrous thousand-page bills that not only effectively delegate unlimited power to the unelected bureaucracy but, like Obamacare, are so unworkable that the administration itself has to jettison one piece after another.
Oppose further expansion of the entitlement state, reform the tax code, secure the border, demand clarity on Afghanistan. A modest, doable, responsible agenda for 2013.
Read more from Charles Krauthammer’s archive, follow him on Twitter or subscribe to his updates on Facebook.
Read more on this issue:
George Will: Obama’s never-mind presidency
Posted by jtf at 5:32 AM