In a Golden Land, but Grateful for Brass Rings 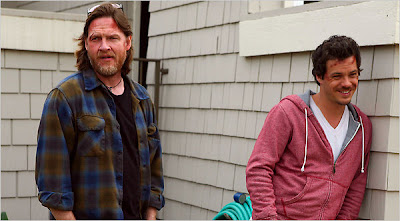 “Terriers,” a cop show beginning on Wednesday on FX, is the joint effort of Shawn Ryan, creator of “The Shield,” the bleak treatise on police corruption, and Ted Griffin, the writer of “Ocean’s Eleven,” the jaunty examination of high-end fraternal thievery. And the series feels precisely like the love child of these two seemingly inconsistent sensibilities. “Terriers” has a genetic disposition at once vaguely melancholy and eccentrically sprightly, but the good mood always seems to prevail. This is a welcome love child, one we are eager to embrace rather than put up for adoption.

The series is set in an area of San Diego called Ocean Beach, where the climate is too good to inspire much ambition, and the opportunities to make a killing don’t present themselves in any case. Stuck at the fringes are Hank and Britt, scrappy pups — one a former detective whose bad habits prompted an early departure from the force, and the other an ex-burglar who fell for his girlfriend when he saw her picture on the fridge during a break-in. The two men talk about back alimony while riding around in a pickup truck that suggests that they clean pools — but really they are verbally agile private eyes who are struggling and without a license.

We are in the era now of the light-and-funny cop show — perhaps a reflection of violent crime’s decline in various American cities. “Terriers” is at home in the genre but stands rungs above a cheap effort like “Psych” (USA). If it didn’t, I would borrow the sledgehammer the writers have deployed to carve out a few clichés and use it to wage an attack. “Terriers” stirs generous impulses even as it gives birth to what seems like the 6,349th television cop who has done war with the top shelf and bottom shelf of every bar in his precinct, lost a woman and committed his midlife to brooding over her.

The cruel twist on Hank is that he had the misfortune to have been abandoned by his wife just as he got sober. He is played by Donal Logue, who has a schlubby sex appeal and easily settles into the skin of a man who has made a certain peace with his discontents. Unable to get over his wife but resigned to the reality that he will probably never be with her again, Hank decides to buy back their old house as a remarriage substitute — a move that a disapproving friend from Alcoholics Anonymous likens to erecting “a museum of your past mistakes.”

Buying the house is a big deal for Hank. Financial limitation is a recurring theme in the series, and the lengths he must go to to have his mortgage application approved violate several ethics codes. Britt (Michael Raymond-James) is in even worse shape. He cannot afford to take his veterinarian-in-training girlfriend to dinner, and the question looms of how he can stay afloat without reverting to prior career paths.

“Terriers” moves from crime to crime episodically, but the big case that threads through to create a running narrative involves the severely tarnished morality of a local land developer. This being Southern California, it is fitting that the biggest villain is in real estate and that the most disturbing nut job is a home-loan officer.

“Terriers” hangs rich people out to dry, makes fun of yuppie affectation and seeks as much to position itself on the right side of the class war as it does to amuse us. It succeeds amiably on both fronts.