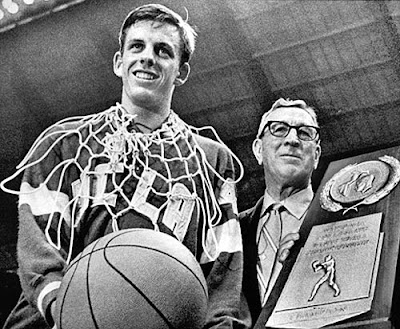 In 1970, Wooden held the NCAA championship trophy again as the Bruins, led by guard John Vallely, who became known as "Money Man" for his play in big games, defeated Jacksonville, 80-69, in College Park, Md.

When John Vallely left Orange Coast College and got to UCLA, the train had left the station.

Then Vallely and the Bruins got together for the first day of practice.

They practiced putting on their socks.

"I thought, this is the craziest thing I've ever been through," Vallely said Friday night.

For the next three days the Bruins hit the court, but not with a ball. They practiced balance, footwork, movement. Vallely looked around. Lew Alcindor was doing it, too.

Vallely would help the 1969 team win the title, as expected, and the 1970 team win another one, which was unexpected.

Everyone else talked about the winning. Wooden rarely did.

"He'd tell us that if we put forth the effort and were loyal to each other and unselfish, he had a pretty good idea what was going to happen," Vallely said.

It all began with smooth socks.

A 99-year-old life based on rapt attention to the most miniscule detail finally ended Friday night, 35 years after Wooden coached his final game.

He would have turned 100 on Oct. 14, the day before UCLA would begin practice. Originally the school was going to unveil the remodeled Pauley Pavilion on that birthday. Few doubted he would make it. His memory never failed him, whether it was black-and-white or color.

Vallely's immediate reaction was, "He's back with Nell," Wooden's beloved childhood sweetheart. They exchanged winks before each tipoff. She died in 1985 and, on the 21st day of each month Wooden wrote her a letter.

But there was also disbelief and disorientation Friday night, because Wooden leaves a permanent hole.

His brand of daily rigor no longer exists, except in Wooden books, Wooden sayings, and the Pyramid of Success,

Happiness through self-sacrifice and difficulty. It made Wooden a twilight sensation to a generation that didn't know Swen Nater from Ralph Nader.

"I always ask people, what part of the Pyramid of Success would you remove?" said Vallely, who is a renowned public speaker and leaned on Wooden through a life that brought cancer to himself and claimed his daughter.

Every year Wooden became more of a beacon as his former profession devolved. He never made more than $32,500 as UCLA's coach, and his team practiced amid intramural volleyball players.

Wooden didn't refer to his players as "kids" and thought "student-athlete" was a redundancy. He did not insult his players in the name of "intensity." That made his criticisms even more poignant, strangely enough, and he could strip an official's soul without a single bleep.

But then he was a tough guy, a chiseled athlete in his Indiana youth and a hero while in high school and at National Player of the Year at Purdue. He could deal with superstars because he had been one.

He did not bargain. He listened to Bill Walton explain why a beard was so important to him, and replied that he respected Walton's convictions. "And we'll miss you," he said. Walton shaved immediately.

"There was so much going on back then," Jamaal Wilkes said. "The Vietnam War, the civil rights issues. It was a confusing time, and yet here was someone so pure and clear and pristine. He always talked about 'the young men under my supervision.'''

Today, UCLA would not permit a coach to work 15 years before he won a national championship. Wooden was the foil for Bill Russell and Phil Woolpert at San Francisco, Pete Newell and Darrell Imhoff at Cal. Meticulously he rewrote his practice plans and reconsidered his drills and found a way to get substitutes involved.

There was no slavish reliance on a "system."

Along the way he made college basketball a major sport. The groundbreaking Astrodome loss to Houston, in '68, was televised by the bootleg Hughes Sports Network. Few games were televised on channels anybody watched, but UCLA's 88-game winning streak — and its death, at Notre Dame — created a commodity.

Now basketball is a glutton's paradise, with every game televised somewhere, and high school teams flying cross-country each weekend.

Underneath all that, in the quiet places, John Wooden undoubtedly guided more lives than any sporting figure in his 99-year time.

One day Vallely told his coach that he and his girlfriend, Karen, were getting serious. Wooden stuck his finger in Vallely's chest and said, "Then you marry that girl."

The Vallelys went to Reagan Medical Center on Wednesday and Vallely reminded Wooden of that day.

"He got this big smile on his face," he said.

They walked away, propelled by goodbye, Vallely's socks tight on his feet.