The man paced near his locker. He spit in a nearby sink. Words flew out of his mouth like darts, each one sharper than the last. He was angry, beyond angry, the kind of anger that needs to find its target and beat the holy heck out of it until the anger gives way to exhaustion. This should have been one of the greatest moments of his life, and it turned into one of the worst, and you can know it was an honest mistake and nobody died and life goes on, but how can you really think that when the mistake was entirely your fault? 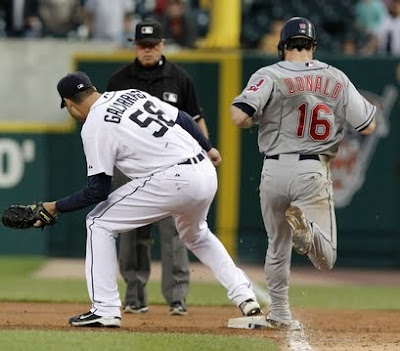 No, Jim Joyce said, "I did not get the call correct. I kicked the (expletive) out of it." No, he would not blame his angle. ("I had a great angle on it."). Or say it was close. ("I just missed the damn call.") It was a simple play, 3-1 on your scorecard: ground ball to first baseman Miguel Cabrera, throw to pitcher Armando Galarraga, Cleveland shortstop Jason Donald out of first.

And the 27th out of Galarraga's perfect game Wednesday night inexplicably became a hit.

No perfect game. No no-hitter. No explanation, really, for why a good umpire would make such a horrible call at the worst possible time.

I told Galarraga that Joyce said he felt terrible, that he cost Galarraga a perfect game and that he was really beating himself up over it.

Galarraga did not hesitate.

"Tell him no problem," Galarraga said. "I can go tell him."

He smiled. "I should probably talk to him. It will be better." And he did.

In the Tigers' clubhouse, the winning players looked as if they had lost. The only smiles were smiles of disbelief.

Concepts of time and space were jumbled -- the Tigers sat on the couch and watched Jim Leyland's postgame news conference, which had just wrapped up down the hall, on a delay. They watched the replay over and over, as if it could change, and finally Galarraga smiled, turned and said, "Unbelievable." 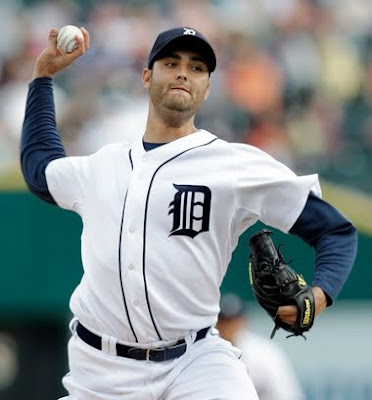 Detroit Tigers pitcher Armando Galarraga throws against the Cleveland Indians in the first inning of a baseball game in Detroit Wednesday, June 2, 2010. (AP)

There is nothing in sports quite like a no-hitter. It sprouts from the ground with no warning, captivates anybody watching -- and reaches full bloom or disappears -- snap! -- in an instant.

Sometimes, a great pitcher is so dominant early on that you start to think something special might be happening. This was not one of those days. First of all, Galarraga is a good pitcher, but he had a 5.64 earned-run average last year. Walter Johnson he is not.

And second ... well, he wasn't overwhelmingly great against Cleveland. He was methodically great. Heck, his catcher, Alex Avila, did not realize what was happening until the seventh inning.

At the end of the seventh, after 21 straight outs, the crowd gave Galarraga a standing ovation. From there, the tension and noise seemed to double with each at-bat, until the top of the ninth, when Mark Grudzielanek drilled a shot toward the left-centerfield wall. It was a rope. The crowd moaned.

Centerfielder Austin Jackson said afterward, "Honestly, off the bat, I didn't think that I had a chance. It was one of those where you're like, 'I'm diving for this ball no matter what.' "

He caught it on the run, one of the most amazing catches in baseball this year. Galarraga was two outs away. He retired Mike Redmond for Out No. 26. Then came the worst moment of Jim Joyce's life.

"I was fully aware of what was going on since the fifth inning," Joyce said.

And Armando Galarraga said, "We're human. ... Nobody's perfect." But in his heart, he knew, and will always know: He was.

It’s a shame Galarraga lost his bid for a perfect game on Jim Joyce’s blown call. It would have been the third such game thrown in the majors this year, and the season is only approximately one-third over! This is amazing when you consider that this is the first year in baseball’s modern era that saw not one but TWO perfect games thrown.

Major League Baseball definitely needs to take a look at expanding the use of instant replay because of this incident. I am always amazed at the fact that serious events seem to always bring about changes. This applies to many areas, not just sports.