What we owe our troops

Hint: It’s more than a pat on the back 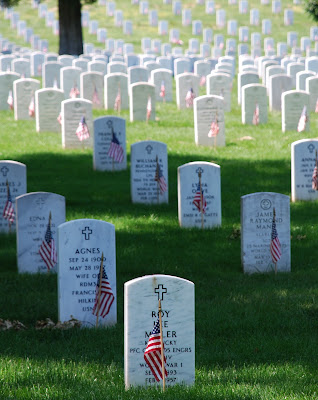 Each Memorial Day, we’re treated to countless columns thanking our men and women in uniform for their service and honoring those we have lost or who suffered wounds. The rhetoric’s well intentioned. But it isn’t enough.

In the midst of war, we owe our troops far more than an annual pat on the back. Those who serve on the front lines and the vast array of military members supporting them have immediate and vital needs. On several important counts, we’re letting them down.

Here are five areas in which our troops deserve better. And we’re going to give politicians and generals letter grades:

* Clear missions. Our military isn’t an all-purpose Band-Aid, it’s an instrument for radical surgery. Too often, our political leaders send in the troops because they’re out of other ideas. Military leaders receive vague, impractical or downright senseless missions. And the chain of command, from the Oval Office on down, tinkers with tactics in the absence of a strategy.

If the president cannot explain a military mission clearly and briefly, it doesn’t mean the mission’s too complex for the common herd to understand. It means the president’s clueless. A mission that can’t be articulated can’t be accomplished. Buying time with soldiers’ lives while hoping something miraculously goes right is not a strategy. (Grade: D for politicians, C for the generals)

* Appropriate equipment. God bless Secretary of Defense Robert Gates, who’s fought to get our troops in combat the gear they really need. Most senior officers support his efforts. The problem’s overwhelmingly with politicians who insist on buying aircraft, jet engines, ships and other systems the military doesn’t want and can’t use. The defense industry has legions of lobbyists in suits no sergeant could afford — and that sergeant couldn’t get in a senator’s door. (Grade: D for politicians, A for the Gates Pentagon)

* Care for our wounded. Military doctors, nurses and field medics are incredibly dedicated — truly heroic. Our battlefield care does a magnificent job of keeping soldiers alive who would have died in any previous conflict. The problem isn’t with the hands-on caregivers, but with the military-medical bureaucracy, the same folks who insisted that Agent Orange wasn’t dangerous and that Gulf War Syndrome was all in the imagination of our veterans.

Bureaucrats have buried what appears to be the best program available for measuring the extent of brain injuries that result from roadside-bomb attacks. It falls into the old green-eyeshade pattern of doing everything possible to minimize long-term health-care claims that might drive up costs (although I wouldn’t rule out even shabbier explanations).

When the majority of our casualties now come from "improvised explosive devices," shouldn’t we be giving those casualties the best treatment available? (Grade: Incomplete for politicians, F for the military’s medical bureaucracy)

* Basic human dignity. We treat service members and their families as infinitely renewable resources. They’re not. They’re thinking, feeling human beings. In today’s endless wars, our strategies need to take better account of the requirement for service members to spend some time with their families. The minimum standard should be 22 months at home station for every 14 months deployed. The generals get this one. Politicians blabber, but do nothing. (Grade: B for Pentagon, F for politicians)

* No political stunts. Few things make me sicker than seeing our troops used as political props. We need fewer campaign photo ops and more serious questioning of policies and strategies that don’t get the job done. When the president goes to a war zone, he shouldn’t just bask in the light of camera flashes in the rear area, but should share the risks of front-line soldiers for a day — to better grasp his role as commander-in-chief. (Grade: F-minus for politicians, A-minus for the generals)

This Memorial Day, the hot dogs on the grill may not be good for you, but the hot dogs in Washington are deadly. Instead of just praising our troops, let’s help them.

Ralph Peters is a retired Army officer and former enlisted man.
Posted by jtf at 6:47 AM