For legendary coach Wooden, poetry was a passion, escape 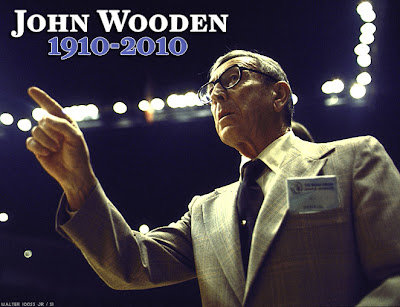 I can't be sure that John Wooden was reciting poetry at the moment he drew his last breath on June 4, 2010 at the age of 99, but I have good reason to believe he was. In September 2006, when I visited Wooden at his modest apartment in Encino, Calif., he told me that he liked to recite poetry to help him fall asleep. He had a rotation of maybe a half-dozen ditties, including a couple that he had written himself. With an easy smile and a dulcet voice, Wooden recited for me one of the self-written poems he used to hypnotize himself:

The years have left their imprint on my hands and on my face
Erect no longer is my walk and slower is my pace
But there is no fear within my heart because I'm growing old
I only wish I had more time to better serve my Lord
But I've gone to human prayer, he has brought me inner peace
And soon my cares and problems and other worries cease
He's helped me in so many ways, he's never let me down
Why should I fear the future when soon I could be near his crown?
Though I know down here my time is short, there's endless time up there
That he will forgive and keep me in his ever loving care

I asked him if he actually spoke out loud while completing his nightly routine. "Sometimes out loud, and sometimes I'll just recite them in my head," he replied. "But I'll never know. I may go to sleep in the second or third, or maybe the fourth. When I wake, I think, 'I wonder which one I fell asleep to?' "

So yes, I like to think Wooden was whispering rhymes when he left this world. No doubt his passing will be greeted with many tributes. By the simplest measure, he was arguably the most successful coach of any sport in American history, having won 10 NCAA championships in 12 years. Given that only two schools (Duke and Florida) have even won two titles in a row since Wooden claimed his last in 1975, it's safe to say that achievement will never be surpassed.

Many other encomiums will be affixed to Wooden in the wake of his passing, and they will all be fitting. He was a gentleman, a scholar, a teacher and a friend. He was a straight arrow, a paragon of integrity, a man of unfailing humility and open spirituality. He was an author, a lecturer, a professor emeritus of sports and society. He was the ultimate family man.

I like to remember John Wooden the poet. He loved to read poetry, write it and especially recite it. His power of recall, even in his late-90s, was astounding. On the two occasions in which I ate breakfast with him at Vip's restaurant on Ventura Boulevard -- his favorite spot -- I ended up listening to him recite poetry to me in his den. When he told me, as he told so many others, that he would have been happy remaining as an English teacher back in Martinsville, Ind., it was easy to believe him. 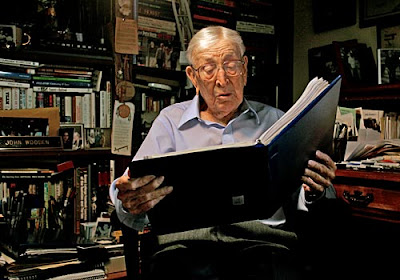 Wooden, at his Encino home, reads from an assembled book of poems sent to him by one of his former players, Swen Nater.

Wooden wrote nearly a dozen books, most of them variations on his Pyramid of Success, but for his final project he wanted to compose a book of poems. He conceived it in the same rigid, hyper-organized fashion in which he planned his practices: The book was going to contain exactly 100 poems, 20 each on family, faith, patriotism, nature and fun. During our last visit he told me he had composed about 65 or 70. He never intended to publish the compendium. He just wanted to leave it behind for his family.

The poems Wooden wrote over the years would never earn him a Nobel or a Pulitzer, but they did serve their purpose. In January 1962, Wooden received a letter in verse from one of his former players, Pete Blackman. He replied in kind with a long poem of his own lamenting the shortcomings of his current team. But he ended the letter with an upbeat stanza:

However, Pete, there's optimism
Beneath my valid criticism
I want to say -- yes, I'll foretell
Eventually this team will jell
And when they do, they will be great
A championship could be their fate
With every starter coming back
Yes, Walt and Gail and Keith and Jack
And Fred and Freddie and some more
We could be champs in sixty-four

That verse proved to be prescient. Despite not having a player taller than 6-foot-5, the 1963-64 Bruins gave Wooden the first, and most unlikely, of Wooden's 10 national titles.

Wooden's affection for the written verse also helped sustain him through the darkest period of life, when he fell into a deep depression following the death of his wife, Nellie, in 1985. He told me of the time he penned a few lines of doggerel after receiving an encouraging call from a close friend:

At times I'm feeling a little low, I hear from a friend and then
My worries start to go away and I am on the mend
No matter what the doctors say, and their studies have no end
The best cure of all when spirits fall is a kind word from a friend

I asked Wooden where his love of poetry came from. "I'd say from my father reading to us when I was on the farm," he said. "We lost the farm when I was a sophomore in high school, but my dad would read to us. We had no electricity, no running water, a few oil lamps. He would read to us from the Scriptures practically every night. He read a lot of the early American poems."

Wooden narrowed his eyes slightly and smiled. "I can just see my dad as I see you, if I close my eyes," he continued. "I studied poetry when I was in college. I wrote a paper on it as I worked towards my thesis. I've just enjoyed it. It paints a picture. A lot of people don't like it. I can't understand that." 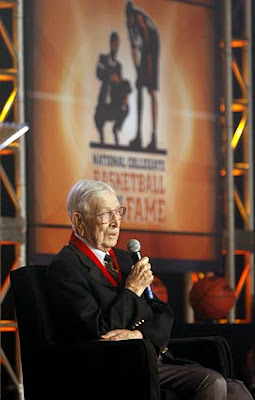 
In 2003, Wooden combined his love of poetry with his Pyramid of Success to write a children's book called Inch and Miles: The Journey To Success. The title refers to two characters -- a worm and a mouse -- who discover the Pyramid's tenets in search of the proper definition of success. (Success isn't having trophies or toys/It isn't a medal or friends of your choice/What is success? That's easy to see/It's trying to be the best you can be) The book brought Wooden great joy, not least because it enabled him to visit local elementary schools and meet with children who read it.

I can't say I knew John Wooden well, and I have no recollection of his tenure as the coach at UCLA. (I was not quite five years old when he won his last championship.) But I will always treasure the memory of those two visits to his apartment. You didn't have to be a professional sportswriter to gain an audience with him. You just needed a phone book and some time; his number was listed and he was fond of receiving visits from strangers who simply looked him up and dialed. Or, on any given morning you could just pop into Vip's, where he knew all the waitresses and busboys, as well as most of the customers. This, to say the least, was a man of habit. His son, Jim, liked to refer to Vip's as "Cheers without beer."

I visited Wooden ostensibly to interview him, but when you're in his presence you can't help but talk about yourself, in hopes that he will drop you a bit of his wisdom. So when I told him I was the father of two young boys, Wooden counseled that the most important part of parenthood was to provide a good example. That nugget was followed, naturally, with a poem written by a reverend, called "A Little Fellow Follows Me." Wooden spoke it by rote:

At the end of our visit, Wooden told me he wanted to give me something. He ambled over to his small desk, opened a drawer and pulled out an 8x11 slab of cardboard. The poem was printed on that board alongside a photograph of a man walking on a beach wearing a navy blazer, slacks and a white sailor's hat. A small boy walks a few paces behind him.

I asked Wooden to autograph the photo and poem to my sons. He turned on the lamp and in his meticulous, cursive handwriting he wrote, "To Zachary and Noah. Love, John Wooden." Today, the poem hangs framed on a wall in Noah's room. I like to think of it as Wooden's voice from the grave, speaking in rhyme.
Posted by jtf at 6:44 AM